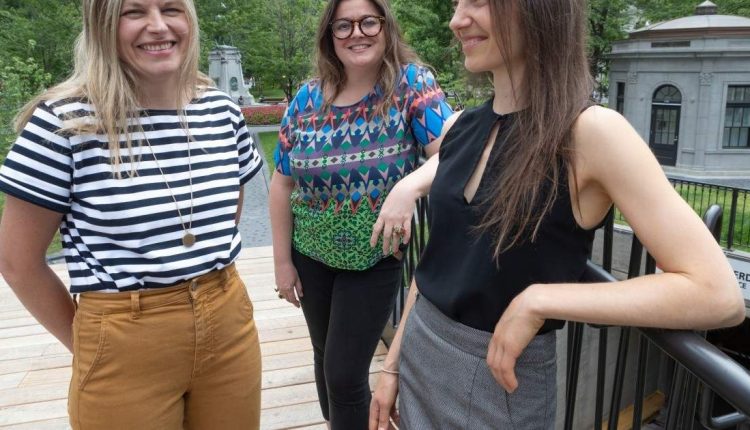 Late last year, Montreal-based food critic Lesley Chesterman announced her departure from the Montreal Gazette, marking the end of a 20-year run. At the time, it wasn’t clear who would replace them – or if there would be a replacement at all – given the declining number of food critics across North America. At the end of June, however, the Gazette made a surprising announcement: It would bring not one but three food writers on board to form its restaurant team.

Editing was done by Joanna Fox, Isa Tousignant and Amie Watson, each offering different but extensive journalistic experiences. While Fox most directly “replaces” Chesterman with their formal restaurant reviews, Tousignant and Watson are expanding the Gazette’s food coverage by focusing on “best of” lists and trend-based features. We sat down with the team to hear their perspective on their new roles, the future of food writing, Montreal’s food scene, and more.

What brought each of you to food writing?

IT – I got to eat through general lifestyle writing. I started out as an arts and culture writer at Hour and became a lifestyle editor there. Then I was a senior editor at enRoute for four years. I worked at Ricardo for about a year, occasionally as a consultant, and helped build their English magazine when that was still a thing. I met Joanna at Ricardo’s, we worked together for four to five months. When approached by the Gazette, she thought I was good for the list-y part. I also work as a blogger for Tourism Montreal, so I’ve been on the streets a lot. This was a perfect, natural fit.

AW – I fell in love with food. When I moved to Montreal for my Masters, I noticed that there wasn’t as much coverage of food as there was in Toronto, so I started my own blog. I also wrote for Midnight Poutine and became their food editor, but I wanted to get into it more seriously, so I started doing stories for different publications, a little bit for the Gazette, enRoute etc. Then I finished my studies and I decided I’d rather write food full-time. I went back to journalism school and got an internship at enRoute. Since then I’ve been working for her, Ricardo, MA TV and others, doing TV segments on BT and Global. I also have an app called Fork That which is like a dating site but for finding the right food.

JF – I got into the restaurant business at a young age, worked in a food court when I was 14 or 15, then occupied tables in a restaurant, and later worked as a waitress and bartender. I lived in London, England when I was in my early twenties, working in bars and restaurants, and that’s where I really came to eat. There were so many different cuisines from different countries in this one city; it kind of blew me away. From there I traveled around the world to experience all of this food up close and finally made my way to Australia where I did my Masters in Gastronomy at Le Cordon Bleu in Adelaide and studied the history and culture of food. After graduation, I proposed a book idea that got a publisher in Montreal (a best BYOB guide), I came home and started writing. Soon after, I started writing for the Montreal Mirror as one of their restaurant reviewers, and I was slowly adding writing jobs on the subject of food.

How do you like the division of working as a team instead of just having a single food reviewer or writer?

AW – It’s way better. We can also pass ideas on to one another. I recently sent Isa a draft to get her feedback. We can also think about overlapping coverage; If they make a list that matches my feature, they can be published at the same time. It’s a mutually supportive way of dealing with coverage.

IT – Even when the Gazette had fine dining and affordable columns, all mid-range restaurants fell between the cracks. The city can show its colors here. The next generation of Chinatown items {that Amie made}; who should tell this story? Not a food critic.

AW – I’ve waited years to tell these stories. There was no outlet for it. Where can I look next to the Gazette? It’s a local story. Living in Montreal, our Chinatown is completely different from Toronto or Vancouver. I hope it is interesting for readers to understand why.

Do you think that food writing goes in this direction, away from criticism and more towards investigative journalism and features?

AW – Joanna gives a lot of context to what is important. She has a word count that enables her to do that. I don’t think she’s as fond of feature-type writing as I am. This is my niche.

IT – I think there will always be a need for ratings and recommendations. Yelp and TripAdvisor say, “Who is this person, why should I trust them?” There’s always this doubt. Amie, Joanna and I all have decades of experience as journalists in food and writing. It is this know-how that gives us a head start.

AW – Even if you disagree with Joanna’s reviews, Isa’s brunch recommendation, or my thoughts on Chinatown, there is still credibility. If you disagree, you can still make decisions and understand where we are from.

What do you think of the shift away from more formal food critics to more frequent food writers / bloggers? Is this democratization of meal writing good or bad?

IT – I like that eating becomes less demanding. Writing becomes less demanding. Everyone has been a critic since the beginning of the blog. They are critics of their own type. I really love that. Pretending there are differences between one person’s tastes and another is a fallacy that we can’t really keep up with. The three of us are a trifecta; practically a small magazine section in the newspaper. You get a topic from different angles, from politics to dinner tonight to intense, in-depth taste descriptions.

JF – It depends. When a blogger gets a free meal and drink to say that a restaurant is fantastic, then it doesn’t really help anyone decipher the quality of that particular food, let alone misleading. What if someone is genuinely interested in eating out, paying for it, and then giving their opinion somewhere online? Sure, why not? Food is something we all share and people really love it, it makes people talk. That being said, not everyone is nice or fair, and I’ve seen restaurateurs get really upset when a blogger criticizes them without getting all of the information right. I have to do my homework and to the best of my ability to get my information right. It’s terrifying how much misinformation there is.

Food critics have traditionally been anonymous. Will restaurants see you differently after information about your new positions is posted?

AW – Nobody recognizes me. I am not recognized at all. Except maybe through my Resy account.

IT – No, no, not at all. People usually have to meet me three times before they remember me. Apparently I’m not that memorable {laughs}.

JF: There was no way I could have remained anonymous. You could already find my picture online if you searched for it, and when the Gazette wanted to cover who I was, I agreed. I don’t think a lot of people recognize me when I go out. Also, I’m so new to this gig. I don’t make reservations under my name, and by the time people notice I’m there and do a review, it’s probably too late. When I was a waitress here in Montreal, everyone knew what Lesley Chesterman looked like. Maybe it was a secret to readers, but everyone in the industry was guaranteed to know it by sight. So it didn’t matter!

What role do social media play in your role as a food writer? Is it a mandatory part of the job or something that you can choose and do?

AW – It depends on you. If you want to brand yourself, this is important. I do Instagram for my app, but I don’t do it for myself personally. I always post my stories on Facebook. I also use Facebook to reach out to people for insight into stories. It is suitable both as a research tool and as a subsequent distribution of an article. It’s really important just to get the story out there.

We went out for a drink and something to eat the other night and I took photos with my cell phone. Isa didn’t take any. It was really just fun and nice not to work all the time. A younger person will read this and roll his eyes.

IT – If it’s not memorable, you won’t remember it. It’s not the picture that does it.

JF – I’m a pretty private person. I don’t like the idea that other people know where I am and what I am doing. Fortunately, as a critic, you can fly a little more under the radar. I can’t post about a restaurant before the review and when I go out to eat for fun I prefer to put my phone away and enjoy a meal because when I work I have to be on the phone, take pictures, etc. When my items come out, I post it or share it, but that’s about it.

What are you most excited about about Montreal’s food scene right now?

AW – I think the cool thing is that we are at a stage where people can afford to open small, chef-run places where you can have a more intimate experience. Wine bar, small plates, Locavore-type restaurants. When the server comes around it can be authentic that it really cares about how your day went. They are not so overwhelmed with their tables that they cannot say anything nice. Cooks can afford their rent because we have an affordable city.

JF – Despite the difficulty of opening a restaurant here (there are so many barriers and very few government incentives and breaks, especially for small and medium-sized businesses), chefs and restaurateurs are still doing it. In addition, they do really cool things, open up places that are multiple things at the same time, like a restaurant or a wine bar, they also sell local wines or products, coffee, even books and merch. It’s an interesting strategy for being successful: getting people on the door and then getting them to stay and spend on other things. Maybe it’s just a mirror of our time.

IT – I am fascinated by the old, the undiscovered and the new. Next, I’ll have brownies and now I’ll figure them out. I know that there are always great places to discover new and old.