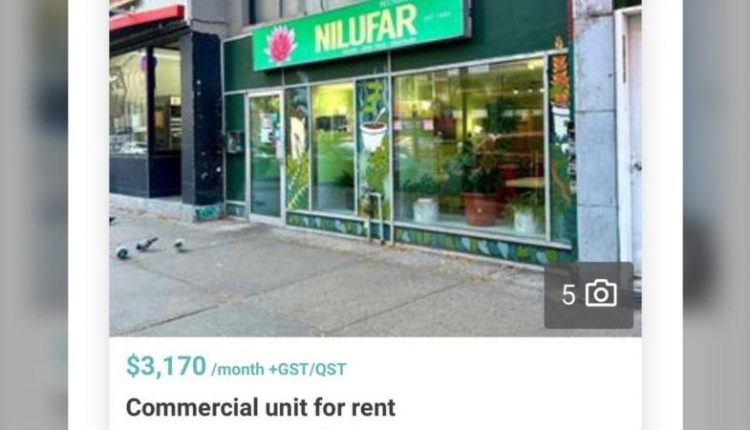 A popular downtown Montreal falafel joint that has been serving Middle Eastern fare for nearly 30 years says it was blindsided after its landlord listed the building for rent without notifying the longtime tenant.

Nilufar, the eatery known for its budget-friendly falafel wraps often enjoyed by students, first opened its doors on Halloween in 1994 on Sainte-Catherine Street.

The manager of the mom-and-pop shop, Nilufar Al-Shourbaji — whose parents named the restaurant after her — said she woke up Tuesday to a text message from a friend asking why her restaurant was up for rent in an online ad.

If you’re wondering, no we didn’t know about this ��
After almost 3 decades of being their tenants, you’d think our landlords would give us some sort of notice so that we wouldn’t find out through a listing.
For all catering inquiries text (514)262-9032 ❤️ pic.twitter.com/e5DusbxGTt

She said after nearly three decades, closing the shop was already on the horizon for her family but wished the landlord had handled the situation differently.

Dozens of people expressed their dismay on social media at potentially losing the Montreal staple.

“This is a huge loss. I survived on Nilufar falafel combos all through grad school in the 2000s and 2010s. So sorry to see you go, especially this way,” one person wrote on Twitter.

The restaurant also got some love from abroad. “Love from Glasgow. You kept me going during university fifteen years ago,” another person wrote.

‘WE DON’T HAVE TO NOTIFY THEM’: LANDLORD

Reached by phone Tuesday afternoon, Amcor Holdings, the real estate company that owns the building, said the tenant was paying rent on a month-to-month basis since 2012 and that there was no obligation for them to notify the tenant.

“We don’t have to notify them because we haven’t taken any action, except marketing the space to figure out what the value of that space is,” said Alexander Wagner, the company’s director of operations. “We haven’t kicked them out. We haven’t asked them to leave.”

Wagner said Nilufar has been paying “below their actual negotiated rent” through a mutual agreement for the last decade and that now Amcor is trying to determine if there are any tenants who want to take over the location. If there are, Amcor will let Nilufar match the best offer they get, he added.

“Those buildings don’t make any money because they’re falling apart and we can’t get zoning,” from the city, Wagner explained.

Al-Shourbaji said she doesn’t intend to match any of the offers that might come her way.

“Even if they don’t find somebody to rent the place. I wouldn’t want to stay there anymore,” she said.

Even though there is no interest in staying at the same spot on Sainte-Catherine, customers will still be able to find their favorite Nilufar falafels. The family-owned business plans to continue its catering services from its factory in Saint-Laurent, which also sells its packaged “Royale” falafels in stores.

During the pandemic, Nilufar raised money to distribute more than 200 free sandwiches to vulnerable people in the fall of 2020 through its “falafel it forward” campaign as a way to give back to the community. In the months that followed, about 2,000 sandwiches went to people in need. Now, the restaurant is also feeling the love through a flurry of supportive messages that Al-Shourbaji said are “so damn heartwarming.”

“It’s hard to see the reactions and it’s hard to read them all. One day, I’ll be able to but for now, it’s pretty sad.”

How a Contemporary Era of Montreal Architects Is Portray the City Moody, Trendy Black