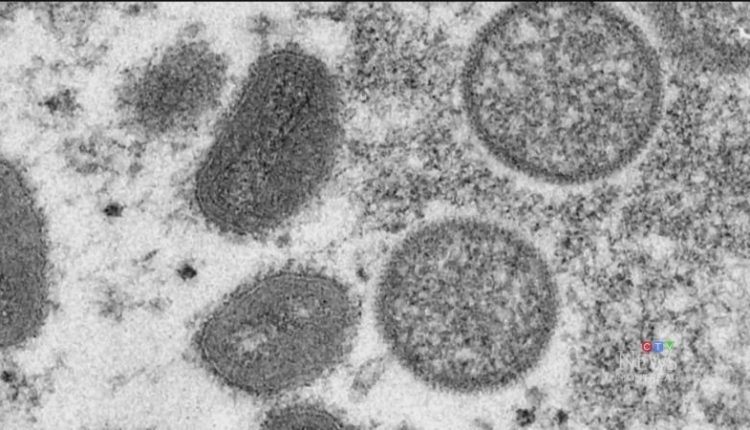 Tourists were among those lining up to get monkeypox vaccines in Montreal on Saturday, as the World Health Organization declared the virus a global health emergency.

Brian Maci was one of several New Yorkers who was waiting to get the shot at an outdoor walk-in clinic in the city’s Gay Village.

Maci, who was already in Montreal on vacation, said he was prompted to get the vaccine in Canada after trying unsuccessfully to book an appointment back home.

“It’s like concert tickets,” he said of the process in New York.

He said he went online right when appointments opened up at 6 pm, only to have to constantly refresh a stalled app and eventually be told no appointments were available.

Later, at a drag show, he heard an announcement that vaccines were available in Montreal, including for tourists.

“They mentioned that this was here and it’s the best thing ever because the community is reaching out, and I can get it without having to deal with the US,” he said.

Another vacationing couple from New York told a similar story about trying to book a vaccine appointment back home.

“I was kicked out of the system maybe five or six times and eventually there were no more appointments, and no telling when more appointments would be released,” said Brad, a 36-year-old who did not want to give his last name .

“We were able to come here and get a walk-in vaccine and it’s amazing, an incredible service,” he said.

Montreal is offering vaccination against the disease to all men who have sex with men, as well as to people who have been exposed to monkeypox.

On Saturday, about a dozen health care workers sat under pink and blue tents on Ste-Catherine street, providing information to people who stopped by to inquire about the vaccine.

Men were asked for their health cards or, in the case of tourists, for a piece of ID, and sat under the tents or perched on a nearby wall waiting for their turn.

McGill University infectious diseases specialist Michael Libman said opening up the vaccine to tourists makes “perfect sense” and is the right thing to do to stop the disease from spreading.

“The big problem is not local spread, but people moving the disease from place to place,” he said in a phone interview.

The World Health Organization announced Saturday that monkeypox now qualifies as a global emergency, noting it has spread to more than 70 countries.

A global emergency is the organization’s highest level of alert, but the designation does not necessarily mean a disease is particularly transmissible or lethal. Similar declarations were made for the Zika virus in 2016 in Latin America and the ongoing effort to eradicate polio, in addition to the COVID-19 pandemic and the 2014 Ebola outbreak in West Africa.

WHO Director-General Tedros Adhanom Ghebreyesus made the decision on calling monkeypox a global emergency despite a lack of consensus among experts on the UN health agency’s emergency committee, saying he acted as “a tiebreaker.” It was the first time a UN health agency chief had unilaterally made such a decision without an expert recommendation.

“We have an outbreak that has spread around the world rapidly through new modes of transmission, about which we understand too little,” he said. “I know this has not been an easy or straightforward process and that there are divergent views.”

Although monkeypox has been established in parts of central and west Africa for decades, it was not known to spark large outbreaks beyond the continent or to spread widely among people until May, when authorities detected dozens of epidemics in Europe, North America and elsewhere.

There were 681 confirmed cases of monkeypox across five provinces in Canada as of Saturday, including 331 in Quebec, according to the Public Health Agency of Canada. Case numbers have doubled since July 1, the agency said, noting it’s also logged the first diagnosis involving a female and the first infections in the province of Saskatchewan during the same time period.

“Since the beginning of the outbreak, the Government of Canada’s top priority has been protecting the health of all Canadians,” read a statement issued after the WHO’s declaration. “The Government acknowledges the WHO’s determination and will continue its work with provinces and territories as it has since the start of the monkeypox outbreak.” ***

The Quebec government said Friday in an email that monkeypox in the province is “relatively contained” despite numbers that continue to creep upward.

The province said it did not keep numbers on how many of the 13,000 vaccines administered so far went to tourists from outside the province.

“In general, we recommend that people get vaccinated in their province or region of origin so that the vaccine has time to be effective before their visit to Quebec or Montreal,” the Health Department wrote.

Libman said the WHO’s declaration of a global emergency constitutes a “call to action” that countries need to contain it.

He says that for now, the disease is mainly being transmitted among a small segment of the population — men who report intimate contact with men — which makes it controllable as long as health officials act quickly.

But he notes anyone can get monkeypox, which is spread through prolonged close contact via respiratory droplets, direct contact with skin lesions or bodily fluids, or through contaminated clothes or bedding.

That means if it isn’t brought under control, it will “inevitably” spread to other groups, including households, he said.

Most of the men lining up in Montreal said they weren’t overly worried about getting monkeypox, or about the WHO announcement.

“For me it’s more about prevention, but you never know,” said Mario Thouin, a resident of Drummondville, Que.

Twenty-three year old Isaiah Hagerman, on the other hand, said he’d already been mulling getting vaccinated, but the WHO announcement gave him the push he needed.

“If somebody gave me a pamphlet maybe a week ago, I probably would have walked past this,” he said.

Maci, for his part, said he felt uplifted by the warm welcome he received in Montreal as well as the community effort to protect people.

“(Monkeypox) doesn’t scare me because of this,” he said, gesturing at the pink and blue tents. “New York is stressful.”

With files from The Associated Press

This report by The Canadian Press was first published July 23, 2022.