As a boy in Montreal, Alex Montagano loved model trains, but he lost touch with the hobby as he focused on building a family and career.

Then about a year before the pandemic struck, he rediscovered his old passion and realized that no matter how hectic life can get — how out of control it may seem — he is in complete control of his environment when constructing a cityscape for miniature trains to race through.

In his basement, working away at models for hours on end, he can give residents of his west end neighbourhood of Notre-Dame-de-Grâce (NDG) that outdoor basketball court they’ve been asking for, or sufficient trash receptacles.

He can bring an aging, dilapidated theatre — once known as the Empress — back to life and portray the reality of Montreal life from orange traffic cones and street-clogging protests to the iconic Saint Joseph’s Oratory.

Montagano is active in municipal politics and has run for office in the Côte-des-Neiges–NDG borough.

He has discovered that model building is a way for him to explore history, delve into his passion for trains and recreate his political vision for the borough, he said.

“It’s also a great way for me to express myself artistically by building like-models of iconic Montreal buildings,” said Montagano, who has opened his home up to community events like the NDG Art Hop so everybody can see his creation.

Alex Montagano reveals his motivations and inspirations for creating his elaborate model of the city and some of its landmarks.

Montagano works almost entirely in N scale, which is a format that ranges from 1:148 to 1:160. That means the trains, tracks, buildings, cars, trucks and everything in between are so small that he sometimes needs a magnifying glass to construct and paint them.

“You have to shrink everything down, and sometimes it’s not exactly to scale,” he explained.

“If I treat it like a science, the proportions don’t look right. So you have to exercise a lot of discretion and artistic flair.”

To create his models, he uses a mix of methods that can range from carving plastic and shaping metal wires to printing out intricate building facades, people, signs and statues with his 3D printer.

Creating the Empress Theatre, his most recent addition, took about 60 hours, between studying the building on Sherbrooke Street in person to designing the model on his computer. Then he printed, assembled, painted and wired it for lighting. 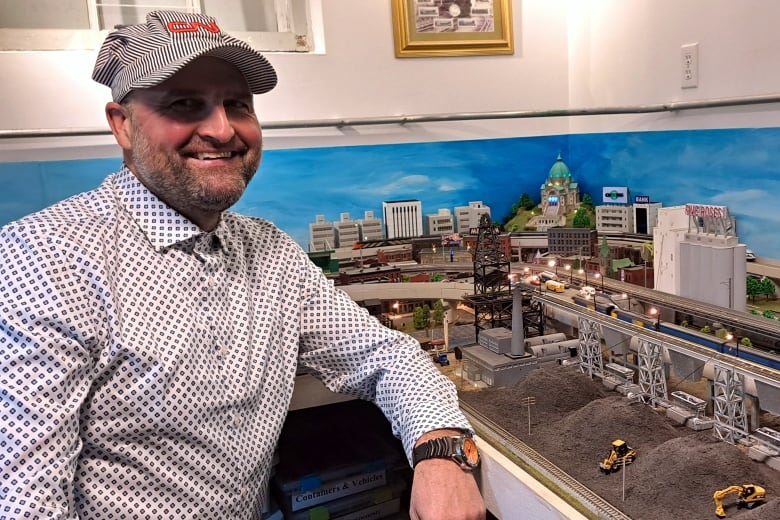 Alex Montagano’s model train set is in N scale, meaning everything is struck down to a point that he has to use a magnifying glass to add details. (Isaac Olson/CBC)

In fact, he wired the entire model train’s structure with tiny LED lights. There’s a massive spider web of thin wires hidden under the structure, creating an unsolvable maze of mild electrical current so street lamps, traffic lights, cars and windows are all illuminated.

“It is an involved process,” said Montagano, a contractor who restores old homes.

His model train hobby can get expensive, but no matter the cost, he said, “I think it is good for me. For my mental well-being. It’s a bit of escapism.”

Ivan Dow, who organizes the annual Montreal Model Train Exposition, said the popularity of Thomas the Tank Engine has reinvigorated the hobby with younger generations.

The interest is multifaceted and people get into it for a range of reasons, be it a fascination with architecture or a love of electronics, he explained.

He said there has been a decline in hobby shops over the years, but trains and models can be ordered online.

Still, budding hobbyists might get turned off by the price as it can be costly, so Dow recommends people buy used. Used model trains can go for 20 to 50 per cent of the original price, he said.

“A lot of the older generation just wants to get rid of their trains when they reach 80 or 90,” Dow said. “You can get really good deals with that age group.”

Take a scroll through photos of the model train: 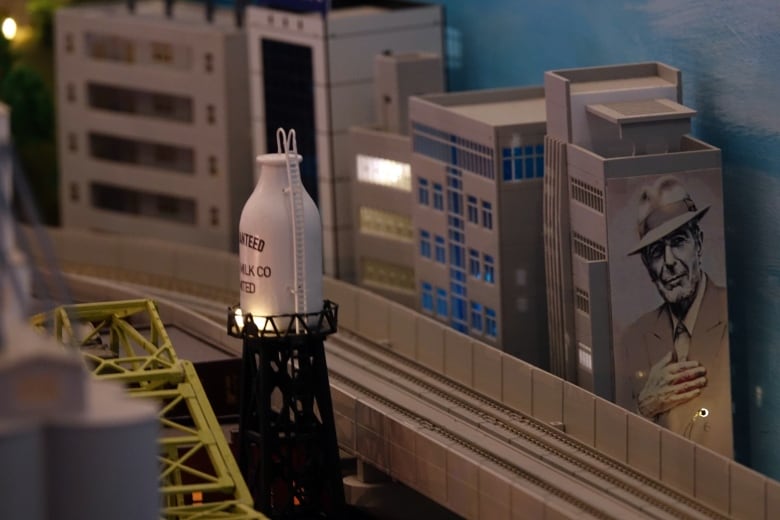 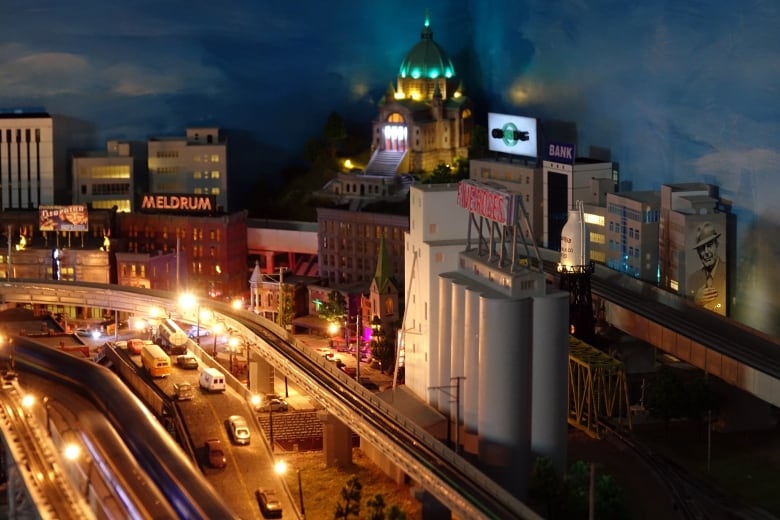 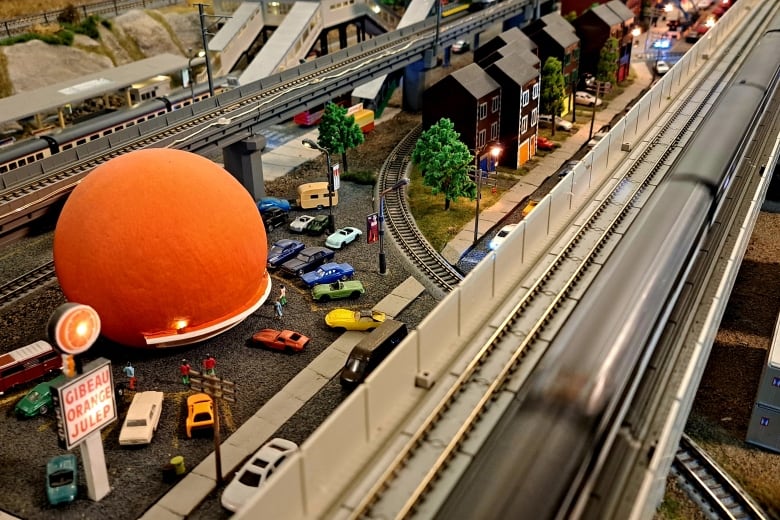 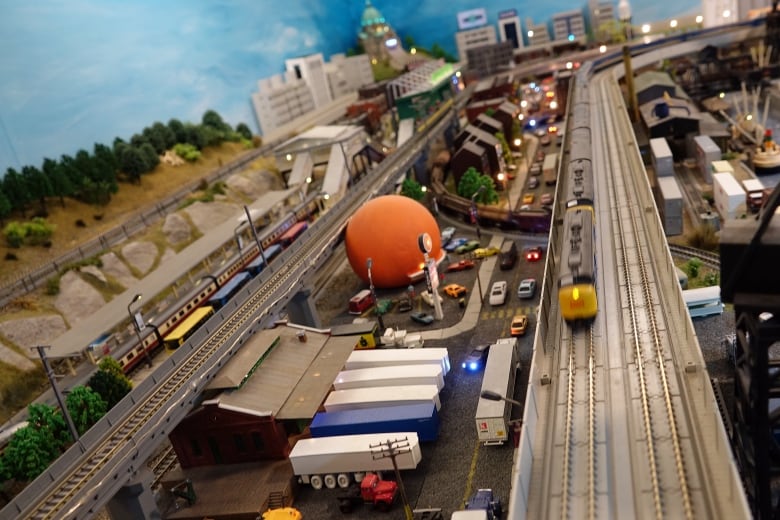 The entire model covers about 4.6 metres with a network of bridges and tunnels for the whirring electric trains. The set operates automatically. (Isaac Olson/CBC) 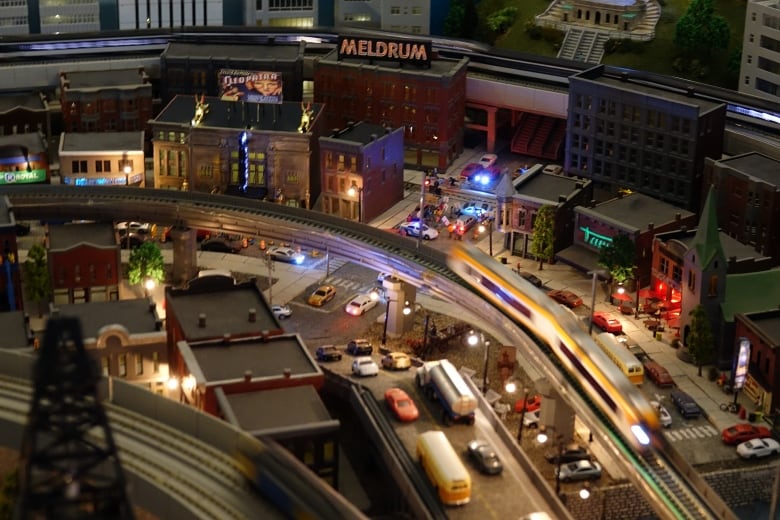 There are popular or well-known sights from around NDG incorporated into the model like the Monkland Tavern and the Meldrum sign. (Isaac Olson/CBC) The model includes locks and draw bridges along the Lachine Canal. Alex Montagano says he will eventually add a bike path so it’s more like the real thing. (Isaac Olson/CBC) 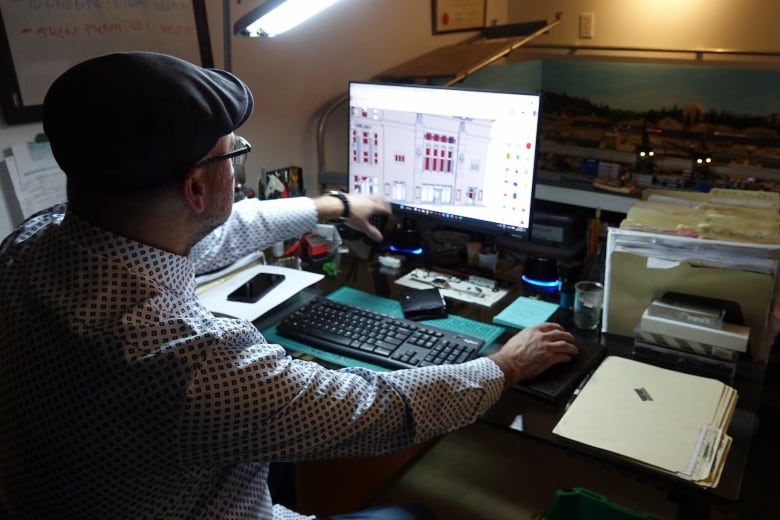 Alex Montagano’s recent addition of the Empress Theatre required hours of work on the computer, designing the model for his 3D printer to create. (Isaac Olson/CBC) The Egyptian style Empress Theatre on Sherbrooke Street dates back to 1927. It has sat largely unused since 1992, but Alex Montagano revived the building in his model. (Isaac Olson/CBC) 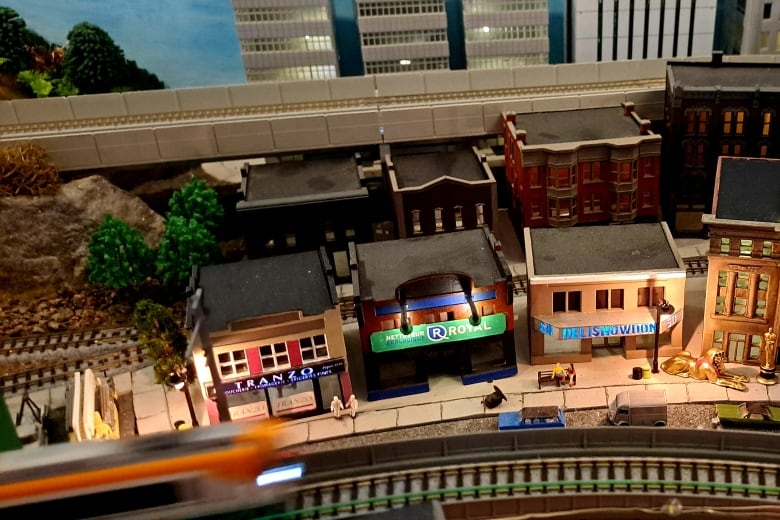 In real life, Boucherie Tranzo, Deli Snowdon and Nettoyeur Écologique Royal are scattered across different locations in Côte-Des-Neiges—NDG, but in the model world, they are neighbours. (Isaac Olson/CBC) 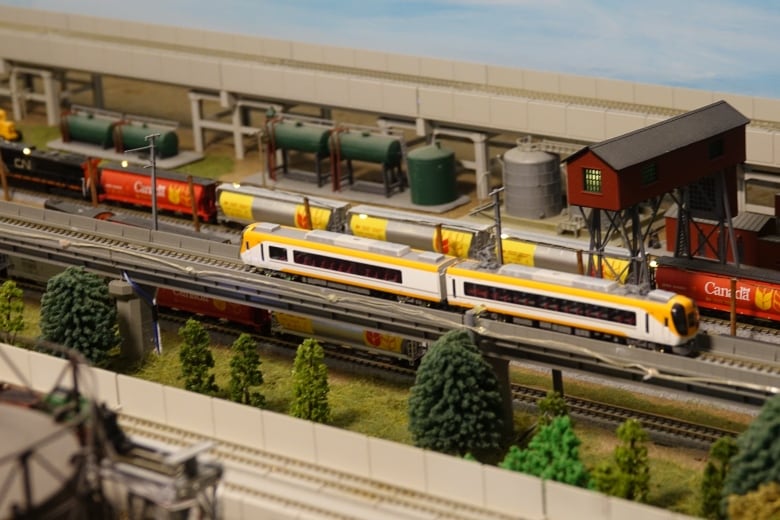 Some features in Alex Montagano’s model have that traditional train set feel with a Canadian touch. (Isaac Olson/CBC) 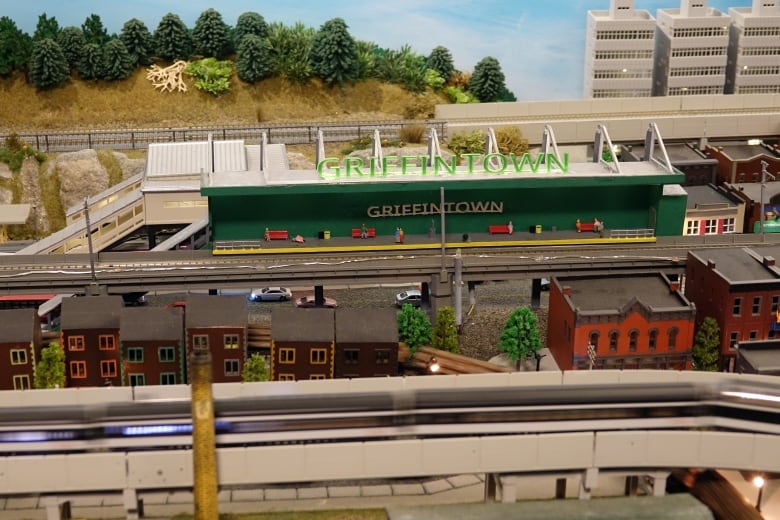 Montreal’s light-rail network will have a station named Griffintown–Bernard-Landry. That name has stirred debate, so Alex Montagano renamed it in his model. (Isaac Olson/CBC) 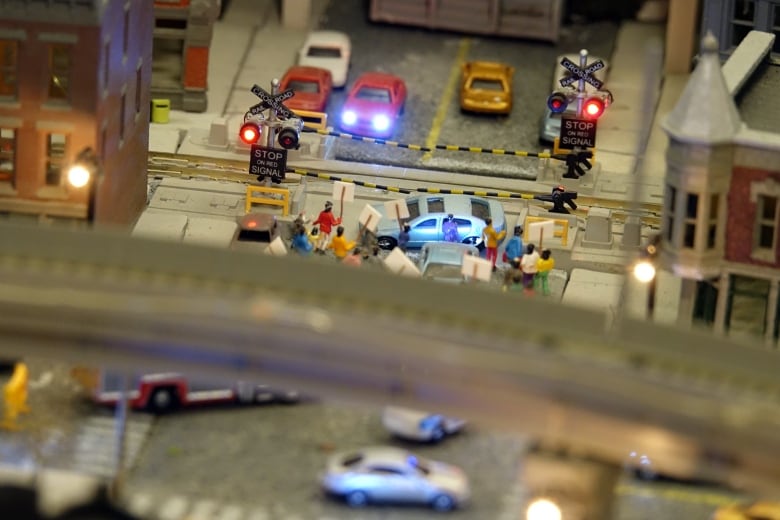 Alex Montagano included a protest in his model, saying the group is opposed to the underfunding of Côte-Des-Neiges—NDG. (Isaac Olson/CBC) 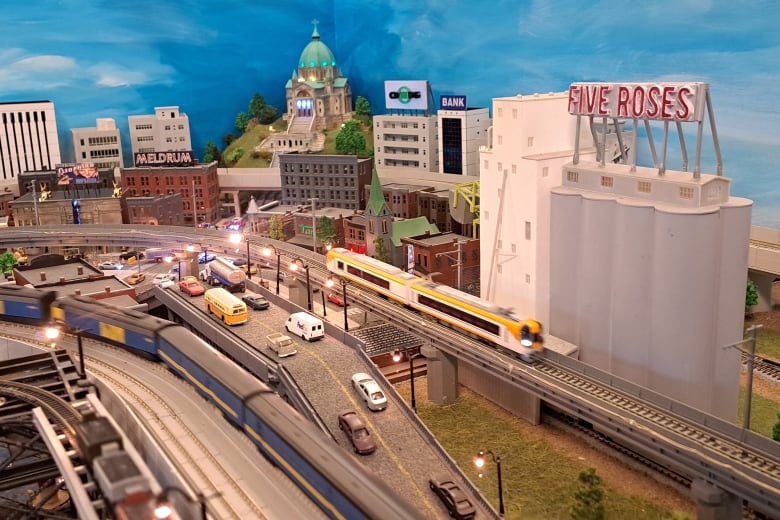 Alex Montagano has recreated a mix of features inspired by Montreal landmarks. The setup is an L shape. In total, it is more than six metres long and about a metre across. (Isaac Olson/CBC) 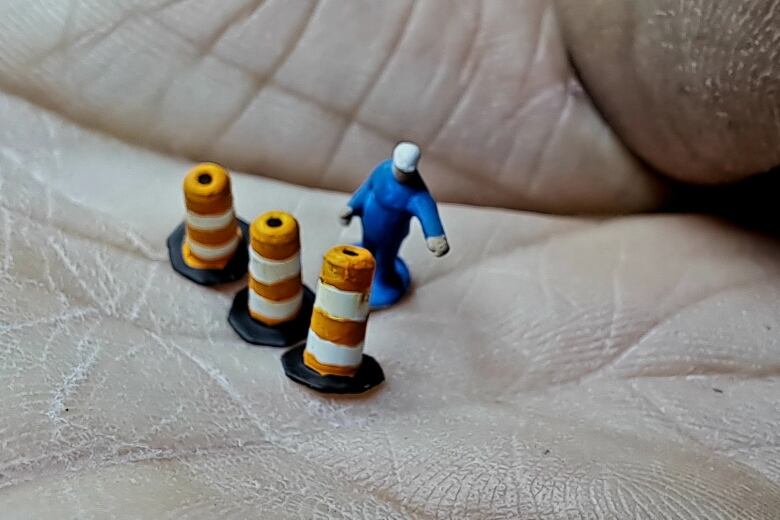 Orange traffic cones are a common theme in Montreal. To be in N scale, the 3D printed cones are about the size of a pencil eraser. (Isaac Olson/CBC) 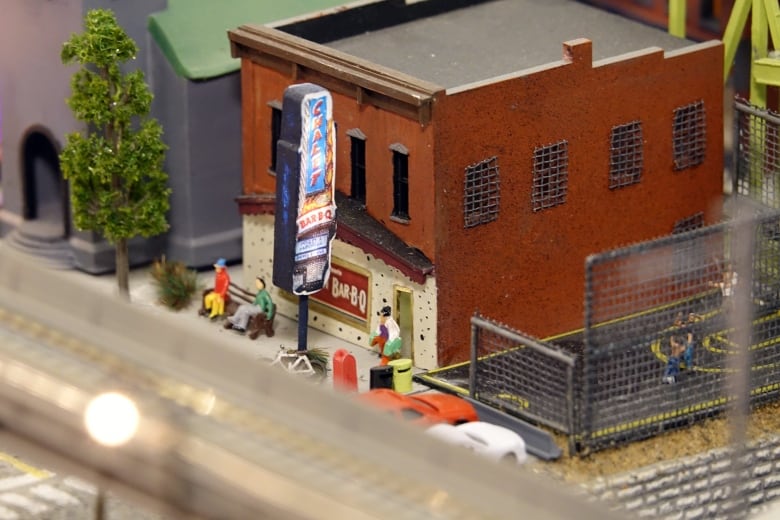 Residents in the Westhaven area have been asking for a basketball court, Alex Montagano said, so he installed one next to the iconic Chalet Bar-B-Q. (Isaac Olson/CBC)