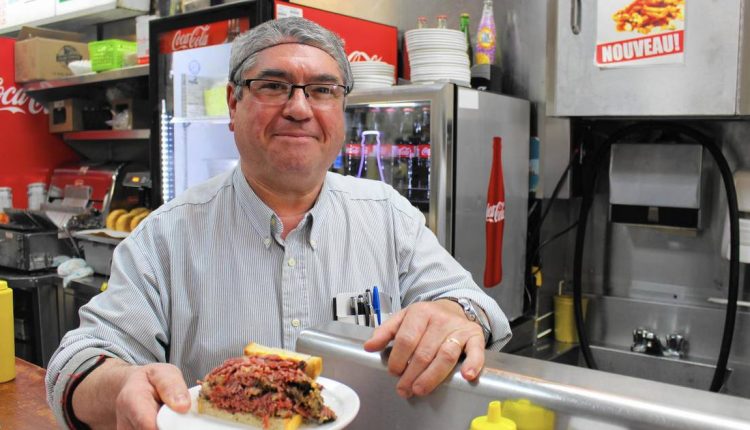 MONTREAL — Ola Claesson sat comfortably for a chat off to the side of the busy main dining room at Auberge Saint-Gabriel.

The inn — now just a restaurant — is 329 years old. Claesson is much younger. The conversation took an inevitable turn toward the supernatural.

“There are stories about ghosts,” said Claesson, the latest chef at an establishment established before Canada was Canada. “I’ve never heard anything, never seen anything — but I guess if these walls could talk, they would probably say a lot. A lot of history … “

A lot of history is being talked about these days here in Montreal. While Canada is celebrating its 150th birthday all year, Montreal is throwing a yearlong party for its own 375th. (For a complete schedule of Alive375 events, see www.375mtl.com.) The significance of “375” as a milepost is kind of a puzzlement; evidently, someone just thought this would be a good idea—and why not?

Our good idea: Poke around Montreal’s treasured food places for hints of the city’s history.

Auberge Saint-Gabriel, built in 1688 by a French soldier in what was still New France, was North America’s first inn. In its lifetime, the inn became a private home and other things (“It was a prison,” Claesson said.) before reverting to welcoming paying customers in 1914.

Cuisine is classical French with Quebec ingredients (the seafood in the bouillabaisse is all-Canadian). Claesson is neither French nor Canadian: He’s Swedish.

And that’s a pattern: Much of Montreal’s culinary identity, certainly over the last 150 years and, really, over all 375, has been shaped by immigrants.

Schwartz’s deli has its roots in Romania. Its founder was immigrant Reuben Schwartz, who opened the place in 1928. Reuben is gone, but little else has changed — certainly not the smoked meat, made on-site and by acclamation the best version of this pastrami-like Montreal wonder.

Cutter Joao Goncalves, “Johnny” to his customers, has worked here since shortly after he arrived from the Azores at age 14. “Forty-three years, my friend.”

Most everyone orders the smoked meat sandwich on rye, a pickle and a black cherry soda. The meat can be ordered lean, medium or fat.

In 1932, Moe Wilensky (son of Russian immigrant Harry) started serving sandwiches at what had been his father’s barber shop-cigar store.

“They got a little grill and started with hot dogs,” said Sharon Wilensky, Moe’s daughter. But Moe’s own lunch would be salami and baloney, grilled, on a kaiser roll, a little mustard, the whole thing squished like a panini.

“Guys in the neighborhood would say, ‘Can you make me one like that?’ We used to have other kinds of sandwiches,” she said, “and we got rid of them.”

Thus was born the legend of Wilensky’s Light Lunch and the Wilensky Special. You can still get a hot dog here, but why?

Philippe Brunet is almost an immigrant; he left Quebec for the US and Europe but returned to take over La Binerie Mont-Royal 12 years ago. It’s a diner — circa 1938, and “modest” is a more than fair description — that serves “cuisine traditionnelle quebecoise,” surprisingly a rarity in the province’s premier city. Why so few?

Crowds especially come for breakfast. (Boudin noir, aka black pudding, is a must.) Later, poutines are inevitable. Hearty stuff like pea soup and meat pies. A side dish of beans, served at all hours, is the signature item: white beans in a pleasant sauce spiked with pork fat, slow-baked in a basement oven dating from the beginning. “I make 500 pounds at a time,” Brunet said. “Some weeks, I might make 1,500 pounds.”

The bean ovens, of course, are gas.

Moishes steakhouse, too, has been here a long time — like La Binerie, since 1938.

“My dad was Moishe. He started the restaurant,” said Lenny Lighter, who runs the place with brother Larry.

Today’s Moishes is a different restaurant — but not too different. It’s still a top-tier steakhouse, and Old World chopped liver, along with comfort foods like karnatzlach and verenikas (really good) are still on the menu. A well-job renovation in 2011 freshened the place.

“What I think we’ve been able to achieve,” he said, “is to bring our past with us and keep it intact, and at the same time move to the future.”

For how much longer?

The menu at Chalet Bar-BQ is chicken. And chicken. It’s been that way since Swiss immigrant Marcel Mauron opened the restaurant in 1944. Oh, they have a couple of simple salads, one soup (chicken, of course) and some desserts. Good fries. But the menu couldn’t be simpler: fresh local chicken, roasted for 90 minutes over wood. A little salt. Same rotisserie machine since 1944.

There are more choices at Chez Doval. A totally Portuguese standby since 1974, it’s down the street from little Parc du Portugal and around the corner from the late Leonard Cohen’s house. Chicken, grilled, is accepted here; fish (including sardines), also grilled, taste like Portugal.

I ordered the pork and clams. Tasted like Portugal.

The Portuguese came in the 1950s, “and now they come here,” said Vincent, who tends the bar and the register. “On weekends, it’s always packed.”

And a quick but essential note about Montreal bagels: They’re different (hand-rolled, thinner, other secrets), and they’re really, really good. Seek out Fairmount Bagel (since 1949 at its present location but started in another neighborhood by a Russian immigrant in 1919), or St-Viateur (several outlets, begun by a Polish immigrant in 1957). The manager at St-Viateur is Colombian; rolling the bagels on this day was a Salvadoran. The baker: East Indian.

Costas Spiliadis, from Patras, Greece, opened his first restaurant in 1979, in Montreal. It quickly became Milos. The restaurant is now one of the city’s most stylish seafood places, and Spiliadis is still running it — when he isn’t overseeing stylish Milos restaurants in New York, London, Miami, Las Vegas … and Athens.

“He’s a very hard-working man,” said our waiter, Sabir Hossain (from Bangladesh). “And he’s passionate about everything he does.”

It’s hard to imagine anyone in the food business more passionate than chef Normand Laprise, who, with chef-partner Christine Lamarche, opened Toque! in 1993. Smaller then, the restaurant shifted to larger, more elegant quarters in 2004. If it’s not the finest restaurant in Montreal, it’s certainly in the conversation.

“Every year, we follow the seasons,” said Laprise. “That’s the basis of cooking — to work with what you find.”

Laprise, on this night, found a most excellent loin of lamb with king eryngii mushrooms, pickled eggplant, tarragon puree, lemongrass and mint sauce.

And Laprise and Lamarche — like the lamb and just about everything on the plates at Toque! — are proud products of … Quebec.

“There are now so many chef-owners in Montreal,” said Lamarche. “It’s great.”

And so many great things to eat and stories to share.

Alan Solomon is a freelance writer.