Vincenzo Armeni, 66, had been serving a lengthy sentence for drug smuggling. 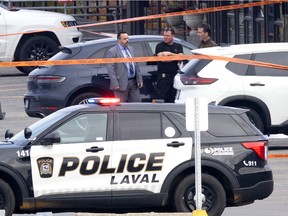 A man with a history of close ties to the Montreal Mafia was gunned down Tuesday morning in the parking lot of a business in Laval.

Police sources identified the victim as Vincenzo Armeni, a 66-year-old drug smuggler who was still serving a sentence he received in 2007.

Officers found him lying on the pavement of a strip mall’s parking lot on the service road of Highway 440, after Laval police received 911 calls before 8 a.m.

The victim was pronounced dead at the scene, said police spokesperson Stéphanie Beshara.

The investigation has been turned over to the Sûreté du Québec because of the victim’s ties to organized crime, Beshara said.

Shortly after Armeni was shot, police found a sport utility vehicle, badly damaged by fire, parked near an abandoned house on 71st Ave. in Laval close to the Lachapelle Bridge. 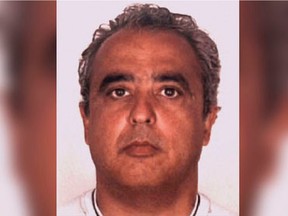 In 2007, Armeni received a 19-year sentence for his role in a conspiracy to traffic 760 kilograms of cocaine. During the summer of 2005, while he was investigated in that case, police had evidence that Armeni arranged to have one of his partners store the cocaine inside a home in Blainville. Four months later, when police searched the house, only 241 kilos were left.

When Armeni was arrested in 2005, he was out on full parole on a 10-year sentence received in 1998 for smuggling more than 160 kilograms of cocaine into Canada. In that case, the RCMP was keeping close tabs on Armeni during 1994 as he travelled several times to South America to meet with cocaine suppliers and arranged to have two large shipments of the drug sent to Canada.

In 2007, after Armeni was sentenced by Justice Richard Wagner, who is now the chief justice of the Supreme Court of Canada, the sentence was combined with his previous one, leaving Armeni to serve a 29-year prison term.

One of the factors that contributed to the length of the prison term was Armeni’s criminal record. That included a conviction on Nov. 24, 1986 for heroin trafficking. He was arrested as part of an investigation along with his uncle Giuseppe Armeni, a man of Calabrian origins who was considered to be a very influential figure in the Montreal Mafia.

In 2016, Vincenzo Armeni was denied parole because, the Parole Board of Canada wrote in a decision, he was still “loyal to the criminal organization to which you belong.” A summary of that decision described Armeni as someone who, from the age of 20, “adopted a lifestyle that centred on ease, greed, compulsive work in businesses and the inflexible code of ‘men of honour,’ ” a term used for reputed full-fledged members of the Mafia.

In 2013, while Armeni was behind bars, the Montreal Gazette revealed the Montreal police force was paying rent to him through the Fiducie Familiale Armeni, a family trust that was headed by Armeni and his wife at the time. The police had been paying rent to the trust since 1998 and used the building in the Rosemont—La Petite-Patrie borough as a neighbourhood police station.

He was also behind bars on Dec. 1, 2014 when his brother-in-law Tonino Callocchia, a high-ranking member of the Montreal Mafia, was fatally shot outside a restaurant in Rivière-des-Prairies.

On Aug. 17, 2020, Armeni was released upon reaching his statutory release date — the two-thirds mark of his sentence.

Later in 2020, Armeni convinced the Parole Board of Canada to modify one of the conditions of his release. He asked the board to allow him to associate with a man who had a criminal record.

Armeni was killed outside a strip mall that includes Céramique 440, a business referenced a few times in an affidavit that was prepared to obtain a search warrant in Project Magot-Mastiff — an investigation into how the Montreal Mafia and the Hells Angels worked together to control drug trafficking in Montreal.

That investigation led to the arrests of 48 people in November 2015.

In 2016, when alleged Montreal Mafia leader Stefano Sollecito had his bail hearing following his arrest in Project Magot-Mastiff, a court was told Sollecito listed Céramique 440 as his employer when he applied for a passport in 2010. Sollecito claimed he had worked there since 2008.

According to a document presented as evidence during the bail hearing, Sollecito and Leonardo Rizzuto, another alleged Mafia leader, used Céramique 440 as a place to meet with several organized crime figures between 2013 and 2015. For example, on Aug. 14, 2013, while he was under police surveillance in Project Magot-Mastiff, Sollecito was observed using Céramique 440 to meet with Gregory Woolley, a well-known organized crime figure, and Davide (Baldy) Barberio, a man who survived being shot in Laval in September 2020.

After the storm, quiet climate returns to Montreal by way of Thursday | Suburban Climate

How Montreal is constructing a robotic workforce