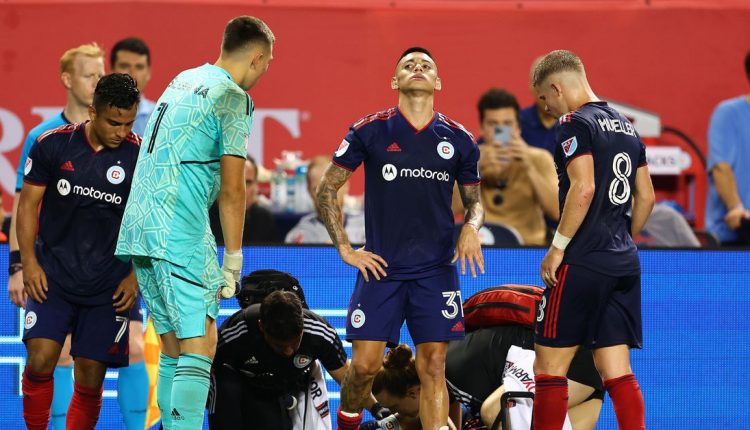 The Chicago Fire season ended last night with their loss to CF Montreal. You may be thinking this is hyperbolic, and that’s technically true. There are still 7 games left in the season, and as previously stated, every game now is against a team that’s also fighting for a playoff spot. However, for all practical purposes, it’s over. By my admittedly loose calculations, they needed to come away with eighteen points out of their last twenty-four available. And due to the loss, they now have one loss to give while still having to go to Columbus and Montreal, places where they are unlikely to win.

But it wasn’t just that they lost. It was what happened during the match that’s more concerning. Two Fire players had to go off with injuries during the course of the game, and they were the two worst possible players. In the first half, it was Xherdan Shaqiri with a muscle injury in his leg. After a challenge, he felt a week and motioned to the sideline that he needed to come off for treatment. And in the second half, Rafael Czichos came off after tweaking his knee on the Soldier Field turf. Their two biggest signings getting hurt in the same important game is a death knell for the rest of the season if they turn out to be serious injuries.

As for the game itself, the first twenty minutes or so were exciting as both teams were struggling on defense and chances for both sides were coming thick and fast. The breakthrough came 19 minutes in as Ismael Kone shot an absolute rocket from outside the box that beat everyone. The second came due to a poor bit of refereeing (as is MLS tradition). Carlos Teran was called for a handball and booked close to his own box. While the ball did hit his hand, it was tucked into his chest close to his body. As I understand it, that shouldn’t be a handball let alone a yellow card. But alas, the referee called it, and the ensuing free kick was banged in by Romell Quioto. They were two goals the Fire could really do nothing to defend, and the only thing they could do was get aggressive and punch back.

They got some help from the referee toward the end of the first helped. It seemed like he was trying to make up for the bad yellow to Teran and the subsequent goal by making dubious calls on Montreal players. Of the eight cards given in the game, six of them were on Montreal. And two of them were on the same person. Ismael Kone got sent off with one weak yellow and one non-existent yellow, and the Fire had 45 minutes and an extra player to score three goals to win the game.

But despite their advantages, they weren’t able to score a single goal. Montreal stayed focused and compact, while the fire wasted time by passing the ball slowly around the perimeter and sometimes just giving the ball away with poor passing. They were out of ideas and creativity and at the end, they looked mentally tired.

This is all very bad. They didn’t play like they have the juice to finish the season strong. They played tired and have lost their two most important players in the process. With two more games this week, I don’t think they have the energy to get through the final stretch.

The Chicago Fire next travel to Massachusetts to take on the Revolution Wednesday.

Quebec driver dies from accidents after collision with pickup truck