“If I carried I gun to beat someone up and got caught by the police I’d have one more charge placed on me. It’s the imbeciles who do that.” 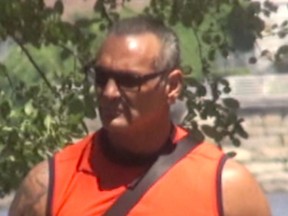 Salvatore Scoppa as seen in video recorded while he was under surveillance in Pierrefonds during the Project Préméditer SQ investigation while he met with the informant in the murder trial of Marie-Josée Viau and Guy Dion. The informant testified that he warned the SQ, early in 2019, that Scoppa would be killed. Credit: Court files. jpg

Only an imbecile carries a gun when he is ordered to rough someone up, a former Mafia hit man told a jury on Tuesday.

The informant, whose identity is protected by a publication ban, is in his second week of cross-examination by defence lawyers in the trial of Marie-Josée Viau, 46, and Guy Dion, 49, a couple from the rural town of Saint-Jude. The former hit man became an informant for the Sûreté du Qûebec in 2019 and said he killed Montreal Mafia leader Rocco Sollecito, in Laval in May 2016, and brothers Vincenzo and Giuseppe Falduto on June 30, 2016, inside a garage on the couple’s farm.

The couple are charged with first-degree murder and conspiracy in the deaths of the Falduto brothers. They are not charged in connection with Sollecito’s murder.

Besides being paid to kill Sollecito and the Falduto brothers, the informant said, he did other types of work for Scoppa during 2016.

It was within that context that defence lawyer Mylène Lareau asked the informant whether he carried a firearm while he performed other tasks for the Mafia leader.

“No. The only time that I was armed was to kill. If I have a gun on me it is for two things; (to kill and) to protect myself. If I carried a gun to beat someone up and got caught by the police, I’d have one more charge placed on me,” the informant said. “It’s the imbeciles who do that, like the bikers.”

While providing details on one job he says he did for the Mafia leader during the summer of that year, the informant said Scoppa asked him to beat up a guy named Sergio at a bar on St-Laurent Blvd., near Mont Royal Ave.

“It was supposedly because he was selling cocaine off of Sal’s back. But it was a story that did not hold up. It didn’t seem to be the real story,” the informant told the jury. “I didn’t want to participate,” he testified. “So Sal said: ‘Just protect me then. If I need you to defend me, get involved.’ And Sal punched him.”

The informant said he later learned that the victim was supposed to pay Scoppa $2,000 per week, possibly for protection, and had not paid for a while.

“I didn’t want to get involved in that,” he said.

Defence lawyer Mylène Lareau asked the questions while attempting to get details of the informant’s criminal past.

The informant said he wore a bulletproof vest for the job, but he disagreed with a suggestion he committed a crime inside the bar.

“When it got started we told people to stay calm. We ordered drinks for everyone and told them to stay calm, that it would all happen quickly and inside the (bar),” the informant said.

“So you threatened people,” Lareau asked.

“It wasn’t a threat. It’s a choice. I explained what would happen. If you do this, something will happen,” the informant said.

“So it’s like a promise,” Lareau asked with a slight giggle.

“It’s not a promise. A promise is something that can be broken. It’s a fact. If you leave from (the bar) I am obliged to do something. It’s an order.”

“No,” the informant said. “A threat means maybe.”

Lareau asked the informant several questions about his relationship with an ex-girlfriend who he claims sexually assaulted him and tried to give him herpes. In August 2017, he was charged with threatening the woman and agreed to follow a series of conditions in order to avoid being detained while his case was pending.

One of the conditions he agreed to was an order that he not possess a firearm. Lareau noted that, during his previous testimony, the informant said that, during October 2017, a man named Charlie Renda handed him a firearm while he was still subject to the conditions imposed on him two months earlier. He described Renda as a man on the Sicilian side of the conflict who wanted a man who worked for Scoppa to be killed.

“So you didn’t respect that condition,” Lareau asked.

“Well, I also broke a condition that I not possess a firearm for the rest of my life (as part of a sentence from a previous conviction),” the informant said also arguing that “technically” he didn’t break the law because he didn’t get caught with the firearm.

The trial will resume on Wednesday.

Sweetbreads: The place to savor the perfect in Montreal?