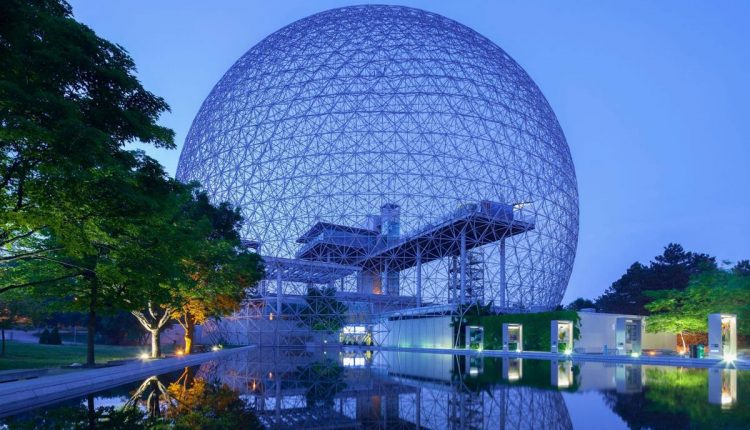 Seeking the unusual and stylish in Montreal | The Impartial

A huge sign espousing the virtues of “Farine Five Roses” greets visitors to Montreal. Just like the Hollywood sign it’s an unintentional landmark, an enigmatic oddity which has come to symbolise the place. Whereas the latter was initially intended to advertise premium real estate in Los Angeles, Montreal’s version once advertised a flour brand. Farine Five Roses is now defunct – and so, strangely, are many of Montreal’s best buildings.

The faded letters spelling out the advertisement, perch on top of a mill where wheat from the Canadian prairies was once turned into flour. The New Royal Mill is also no longer in operation – its disused silos rise like concrete space rockets from a tangle of railway lines, access roads, wire-mesh fences and overgrown hedgerows.

Perhaps only Detroit rivals Montreal for the sheer variety of its derelict buildings, architectural oddities, abandoned spaces, haunted hinterlands and the feeling of something weird in the air. There are ghosts at Montreal’s heart – les fantômes dans la machine. You can feel their eyes on you. Montreal isn’t an oppressive city: its boulevards are wide, there are empty spaces everywhere – deserted lots, car parks, parks. There’s plenty of room for spirits to live unseen. And if you don’t believe in ghosts, these eerie spaces and unexplored corners provide ample inspiration for your imagination to conjure up its own Penny Dreadfuls.

Next to those massive silos is the eerie port. Here, grain from Saskatchewan – once processed into flour at the New Royal Mill – was sent down the St Lawrence River to the sea. The St Lawrence is huge, more like a lake at first sight. It’s a show of nature’s might – yet Montreal men tried to conquer it. They dumped 250,000 tons of soil on the river bed to create two artificial islands for the 1967 Expo.

Buffeted by the breeze, I furiously pedal my hired Bixi bike past Moshe Safdie’s Jenga-stack of flats called Habitat 67. They were built for the Expo to showcase modern high-density concrete housing techniques. They’re not derelict, just a little maudlin. Locals love them despite their windswept location by the river’s rapids. They still look futuristic – asymetrically stacked up as if a giant had sat down and started to play with a supersized toy box.

On the Ile Sainte-Hélène, one of those artificial islands in the river, were many of the national pavilions for Expo 67. Nowadays, the island is used for rock festivals. My first visit to Montreal was on an assignment to cover the Osheaga Festival here six years ago. I was as interested in Buckminster Fuller’s huge spherical Biosphère as I was in the Canadian bands such as Crystal Castles, who played. The two complemented each other: weird sounds, weird shapes.

Arcade Fire, Montreal’s most celebrated group, chose an image of the Biosphère on fire on 20 May 1976 to promote their latest album Reflektor. The geodesic dome, a huge ball, was originally the American pavilion at Expo 67. The French pavilion survives as Montreal’s gloriously kitsch Casino. The Casino looks like the engine from a plane laid on its end. The British pavilion in 1967 famously displayed a prototype Concorde engine. It’s a real shame that Brutalist bombshell is no longer with us. It was a symphony in concrete by Sir Basil Spence – who also rebuilt Coventry Cathedral.

The Expo was about 1960s optimism – that we could create a better world, that the Québécois could build the world’s second-largest French-speaking city and stuff it with more grands projets than Paris.

Travellers come to Montreal because it’s an anachronism – a slice of French tart surrounded by North American pie. That fusion of the Franco and Anglo worlds – food, architecture, culture – is entrancing. Unlike Detroit, which has struggled to reset itself after economic catastrophe caused by the collapse of car manufacturing, Montreal has clawed its way back from a severe decline in the 1970s and 1980s. Even though Montreal has many ghost buildings, there is money and a will to save them. In Detroit, monumental structures such as the grand old Michigan Central Railroad Station still lie deserted, and entire city districts are in ruins. Montreal has had a late flowering, but fixing up all its wrecks takes time.

I think I’m chasing Montreal’s haunted houses – but sometimes I wonder if they’re chasing me. On Avenue Overdale, I’m confronted by a dilapidated mansion apparently airlifted from the Loire Valley – except, in France, they don’t concrete up the windows to stop drug addicts getting in. Canadian Prime Minister Sir Louis-Hippolyte LaFontaine lived here – in 1849 it was attacked by mobs rioting over a tax increase handed down from London. These days, the only riots in Montreal occur if the Canadiens – who play across the road at the Centre Bell – lose a big ice-hockey game.

Four blocks away on Drummond Street, beyond the rumble of traffic on the Ville-Marie Expressway which rips through the city core, the abandoned Mount Stephen Club stands proud. It’s the architectural equivalent of a vulgar double-fingered V sign – the gesture invented by English longbowmen mocking their French enemies at the Battle of Agincourt.

The entente cordiale between England and France is only recent and from 1926 to 2011 this club admitted only English-speaking members of Montreal’s elite. Its existence was a fly in the ointment of relations between the English- and French-speaking populace – the latter nearly won independence for Quebec in 1995. The club has been saved from the bulldozer – but at a price. It will become the city’s most luxurious hotel in time for the 2015 Canadian Formula 1 Grand Prix, with a modern extension tacked on to it.

Even in the touristy Old Town, Vieux Montreal, you can sense something odd. The buildings are bold and big – heavy-set in stone, monumental in tone, with mansard roofs and domes. This city has always been about building big and being brash. The city planners of Montreal tried to control and contrive its architecture around its harsh environment. To use buildings in the way that French waiters use shrugs; to say, “We’re in charge here.”

A few streets from Vieux Montreal is Downtown. Even among the buzz there are silent secrets. Under your feet lies La Ville Souterraine – a labyrinth of heated passages, underground malls, dead ends and Metro station corridors. It’s essential during Montreal’s bitter winters. I get disoriented. I wonder how long I’d last while entombed underground, surviving on poutine – the local dish of fries, cheese curd and gravy – from the subterranean fast-food outlets?

Overlooked by the appalling illuminated crucifix on top of Mont Royal – and faced across Avenue du Musée by a brick crucifix built into a wall – perhaps all the Redpath House can do is pray for its own survival. This derelict mansion, from 1886, in the fabled Square Mile was once home to one of Montreal’s richest families. It’s falling to bits. But its demolition was halted last month, temporarily at least, by Quebec’s culture minister, so it may live to fight another day. Handsome but humbler piles dot nearby Mile End – Montreal’s answer to hipster Williamsburg. In a vintage store there, I stumble on a beautiful bright red souvenir book from the 1976 Olympics. Up at the Olympic Park, the scale of Montreal’s one-time unmatched global ambitions are borne out by stadia.

After Expo 67, the city eagerly hosted these Olympics, but didn’t settle the bill for another 30 years. It was a different age, when politicians believed in radically changing cities like Montreal, of using power for progress. That desire was made real in priapic, posturing new buildings. Montreal’s biggest buildings express dreams – dreams that have often died. And no dream died more spectacularly than the ghost airport at Mirabel, one of the biggest white elephants in the world.

Few of today’s travellers have heard of Mirabel, but it was once the largest airport by land area on the planet. The authorities expropriated a swathe of Quebec farmland larger than Montreal itself to build it. This mammoth project was the end of the line for Montreal’s lofty ambitions. It was the city’s international airport from 1975 to 2004 but now not a single passenger flight goes there – just cargo. Today, its eerily deserted, smoked-glass terminal building is beautifully uncluttered, calmly minimalist and extremely weird. Like Montreal, it is strange but sublime.