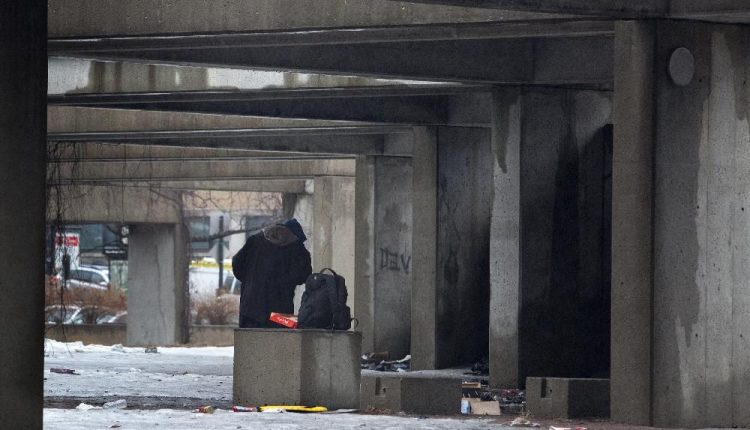 Second Draft: In early 19th-century Montreal, life for the homeless was harsh certainly

Life for the homeless is never easy. But in Montreal two centuries ago, social safety nets that attempted to relieve the circumstances of such people were virtually unknown.

A man takes shelter from the rain at Viger Square, where many homeless people camp, in Montreal, Tuesday April 8, 2014. Photo by Vincenzo D’Alto /Montreal Gazette

It was a distressing sight on the Montreal waterfront that morning in late autumn 1816. There, in a bateau drawn up on the muddy banks of the St. Lawrence, lay the body of a woman.

She was identified as Elizabeth Thomson, the wife of a soldier named Hibberts. The Gazette reported that her death was caused by “intoxication and the effect of cold.”

Hibberts was a soldier in the 104th (New Brunswick) Regiment of Foot, garrisoned in Montreal. In all likelihood his wife was a vagrant, though what had led to her apparent separation from Hibberts is not known. Given their different surnames, they might not have been formally married at all.

Mary Anne Poutanen of McGill’s Montreal History Group notes that female vagrants in early 19th-century Montreal inhabited “a harsh, illicit and dangerous world.” Indeed. It was a world of drunkenness, violence and disease; of unrelenting exposure to the elements, especially winter’s cold; of a constant search for food and shelter; and of little economic opportunity beyond prostitution and petty theft.

Life for the homeless is never easy. But in Montreal two centuries ago, social safety nets that attempted to relieve the circumstances of such people were virtually unknown.

Among the few recourses were begging licences for a limited number of “deserving poor,” which would protect that minority of the indigent against arrest. A House of Industry opened in 1819, though its regimen was notoriously harsh. The Penitent Females’ Refuge, or Magdalene Asylum, was founded to wean vagrant women away from prostitution and train them for domestic service, but it closed after five years, in 1836, because of inadequate funding.

It’s a measure of how dire life on the street could be for vagrants that seeking temporary shelter in the House of Industry or even the common jail could be an attractive alternative.

The jail, approximately where city hall stands today, was especially dreadful, and would remain so for decades. It was overcrowded, it stank and it crawled with vermin. Instead of beds, inmates had only straw or even just the bare floor to sleep on. The place was stifling in summer and barely heated in winter, with wind and snow whistling in through broken window panes. Food consisted of bread and water during the week, Poutanen notes, with “meat … added to a watery broth on Sundays and holidays.”

In December 1835, a vagrant named John Collins froze to death in the jail. Unusually, the case stung Montrealers, not least because of a report in The Gazette.

“Will it be credited,” our report read in part, “that there are now one hundred and fourteen individuals confined within the walls of the gaol, and that there are about thirty of them nearly totally destitute of clothing; that they are almost without blankets, beds, or straw, and that they are absolutely without sufficient means to keep themselves warm during the present inclement weather. …

“We found one cell containing nine prisoners with only three blankets among them, and in another, five with only two blankets.”

At first it appeared that, even in death, community indifference would be the lot of Elizabeth Thomson. Her remains were examined and a coroner’s jury assembled that afternoon. Once the cause of death was officially established, the coroner was asked for a certificate that could be “presented to the Roman Catholic clergy, that the body might be interred in a Christian-like manner.”

It was not to be. The coroner, according to our report, replied that “all that was necessary would be to dig a hole in some place or other and put the body into it.”

Thanks to this indifference, the body lay in the bateau for more than a day after its discovery, “exposed to beasts and birds of prey.”

This was too much for a man named Bouché, another named Roy and an unidentified woman. On their own, they “humanely deposited the body, wrapt in a sheet, into a deal chest and interred it in a neighbouring field.”