Red Coalition also calls for release of any video of incident, an independent autopsy and creation of a citizens’ oversight board for correctional services. 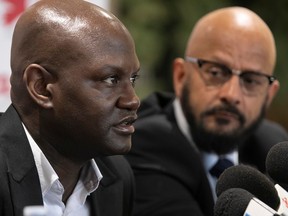 A rights group supporting the family of the young man who died after an altercation at a Montreal detention center on Christmas Eve is calling on the province to do more to shed light on his death — and to take steps to address the systemic issues it says led to it.

The Red Coalition, a group that aims to end racial profiling and discrimination, held a news conference on Saturday to highlight its course of action. In addition to filing a systemic racism complaint with the Quebec ombudsman, the group is calling on Public Security Minister François Bonnardel to launch a public coroner’s inquest into the man’s death. It also wants the immediate release of any footage of the interaction that led to it, an independent autopsy and the creation of a citizens’ oversight board for correctional services in Quebec.

Nicous D’Andre Spring, 21, was being illegally detained at Montreal’s Bordeaux jail when he was pepper-sprayed while wearing a spit hood in an altercation that led to his death. He was supposed to be released a day earlier.

“Nicous was a young aspiring artist … but he was more than that,” said Alain Babineau, a retired RCMP officer and current director on issues of racial profiling and public safety for the Red Coalition. “He was a son, a grandson, a brother, a cousin, a nephew, a young mentor and a friend to many. … The Red Coalition will fight to get justice for Nicous by all avenues available. And also to make sure that this will never happen again to anyone.” 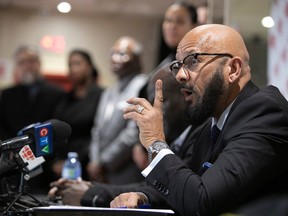 “The Red Coalition will fight to get justice for Nicous by all avenues available,” says Alain Babineau of the Red Coalition. Photo by Pierre on top /Montreal Gazette

Bonnardel’s office refused to comment on the list of requests made by the group Saturday, citing ongoing investigations, but provided a statement saying it “wants full light to be shed on the events surrounding this death, including the aspect of illegal detention.”

“To do this, several investigations are underway and we are not ruling out any future option, including that of launching a public inquiry,” a spokesperson said in an email. “However, we must await the results of the criminal investigation. We will let the authorities do their job. The mistakes made will have to be assumed and answered. The minister of public security will follow up on any recommendations that may be made following the investigations.”

The group said that as a result of similar situations not being taken seriously over the years, the community has lost trust in institutions, which contributed to the decision to demand independent investigations and for the release of the video. The family — who chose not to speak at the news conference Saturday on the advice of their lawyer — has received very little information about Spring’s death during the past two weeks, the group said. 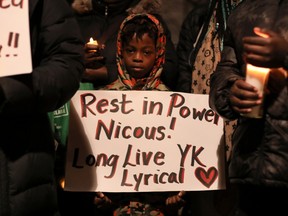 “Now take a moment to reflect on that: This family has still not received any adequate information to temporarily subside their anger, frustration, grief and pain due to the loss of Nicous,” said Joel DeBellefeuille, the executive director of the Red Coalition. “It is inconceivable and unimaginable that they’re being tormented by this anguish on a daily basis without answers. … How are we as a community going to ensure that nothing — I said nothing — like this happens again to any of our loved ones? There is no justification that will appear the devastation Nicous’s family is feeling right now.”

Listing various studies and statistics that highlight how Black people — young men in particular — are overrepresented in prisons in Canada, the group said it believes Spring was a victim of systemic discrimination. Community member David Austin said that while it’s impossible to know what was going through the minds of the guards involved in Spring’s death, the incident was part of a larger pattern.

“This is part of an ongoing pattern of both violence in police custody and in the prisons, which contributes to this overall sense of fear and this palpable sense of dread that, particularly, young Black youth experience on an ongoing, day-to-day base,” he said. “As a member of the Black community in Montreal and in this country, I want to say that we can no longer sit by and watch this unfold. It is absolutely true that the absence of recognition that there’s a systematic, systemic ongoing structural problem to do with race in this country contributes to and facilitates the kind of actions that we’ve seen.”

The hope is that a public inquiry would examine the larger issues that led to Spring’s death, Austin said.

“For me, any public inquiry should not just be looking at the individual case — although that’s the point of departure — but looking at the structural, systemic problems that facilitate this,” he said. “We know that profiling is an ongoing problem, we know that Black folks are disproportionately arrested and detained and incarcerated, all of this is actually true. … The next step is to address the structural problems, or else we’ll be going from one individual case to the next — which has been the ongoing pattern.”

Part of addressing the structural problem would be through the creation of a committee of citizens from diverse backgrounds who could “keep an eye on what’s going on” in Quebec’s correctional facilities, Babineau said.

To address an issue, however, one must first acknowledge that it exists, the group pointed out.

“We’re also going to repeat that Premier François Legault and the entire (Coalition Avenir Québec) government (need to) recognize the existence of systemic racism in Quebec, which has never, ever stopped flooding the foundations of the province’s institutions, which includes the Bordeaux prison facility,” DeBellefeuille said.

Legault’s office did not respond to a request for comment in time for publication.

From the archives: If there is a flood, it should be spring in Montreal