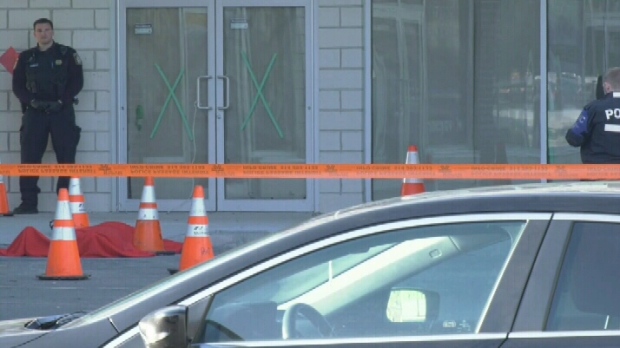 MONTREAL — Andrea “Andrew” Scoppa, reputedly one of the Montreal Mafia’s most influential leaders, was found dead Monday in a parking lot in Pierrefonds-Roxboro, in the West Island.

He had been shot and was lying “in a pool of his own blood” in front of a store at 4744 Saint-Jean Boulevard, according to a Montreal police source. Scoppa’s death was confirmed on the scene.

Investigators are hoping surveillance footage will point them towards a possible suspect in Scoppa’s killing, the 13th homicide in Montreal this year. Officers are also looking for witnesses to the homicide.

Andrew Scoppa was the brother of Salvatore Scoppa, who was killed in front of dozens of witnesses in the lobby of the Sheraton Hotel in Laval last May. Police in Laval launched an offensive against organized crime following the shooting at the hotel, which police said put the lives of hundreds of people inside the hotel at risk.

The Scoppa brothers, who are reputed to have been key players in the Montreal Mafia during the dismantling of the Rizzuto family, are believed to be linked to the murders of four people in 2016, in which four people were arrested last week.

Provincial police said last week they had no doubt that Salvatore Scoppa’s killing was in response to the four 2016 slayings. Andrew Scoppa’s death was likely also a revenge killing, according to veteran journalist Daniel Renaud, who reports on the Montreal underworld for La Presse.

The investigation into the killings, dubbed “Premediter” (premeditate), began in January and culminated with the arrests and the seizure of an arsenal of weapons, explosives and a motorcycle allegedly used in the killing of Sollecito.

Andrew Scoppa was arrested in connection to a cocaine smuggling investigation that targetted members of the Mafia. It was alleged he was distributing cocaine to dealers out of a downtown Montreal condo building. Proceedings were halted in 2017, which led to his release.

Renaud told CTV Scoppa’s death was not come as a surprise to those who follow the movements of Montreal’s underworld, and likely wasn’t even a shock to Scoppa himself. Police had warned him that his life was in danger at least once in the past few months, the journalist said.

With Andrew’s death, the Scoppa clan has been wiped off the map, Renaud said.

“Whatever is left of their clan, if ever there were other individuals who were faithful to Andrew, they will doubtlessly head to other clans,” he told CTV.

The slaying of Andrew Scoppa is the second killing of a key figure in Quebec organized crime in just the past few days. On Thursday, Gatean Sevigny, an associate of the Hells Angels in Quebec, was gunned down in front of his home in Terrebonne.

The Canadian Press contributed reporting to this story