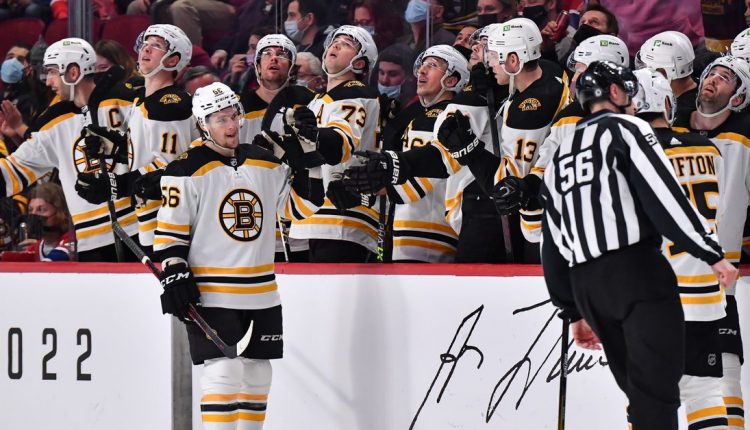 Fresh off of a matinee home win against the New York Rangers on Saturday, the Bruins kept the good vibes coming with a 5-3 win over the Canadiens in Montreal.

After a strong effort behind the net from Brad Marchand, Patrice Bergeron pounces on a loose puck to make it 1-0 Bruins.

After being awarded a penalty shot, Erik Haula goes with the ol’ fake out, then beats Sam Montembeault to make it 2-0 Bruins.

Josh Anderson collects a loose puck and slides it under Jeremy Swayman to make it 2-1 Bruins early in the second.

A few minutes after Anderson’s goal, Haula does not whiff on the puck this time, striking again to make it 3-1 Bruins.

With the teams playing 4-on-4 after matching minors for Marchand and Anderson, Charlie McAvoy cashes in to make it 4-1 Bruins.

The Bruins were in control, but a penalty early in the third period gave Montreal life, and Mike Hoffman cashed in to make it 4-2 Bruins.

Just four minutes later, Nick Suzuki cut the Bruins’ lead to one, making it 4-3 Bruins halfway through the third.

The Habs would press late in the third period, but a few good stops from Swayman kept the Bruins’ lead intact.

Bergeron finished things off with an empty-net goal with six seconds, sending the Bruins to a 5-3 win and a perfect weekend!