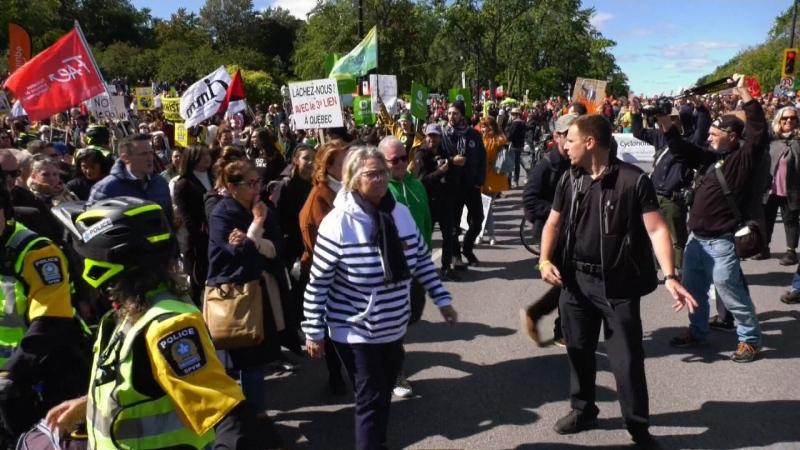 Thousands of protesters gathered for a climate march, including some who shouted “you are not welcome” and “out with the CAQ” toward the minister, who was accompanied by fellow provincial ministers Pierre Fitzgibbon and Chantal Rouleau to tout the government’s record on the environment file.

The chaotic scene near the foot of Mont Royal eventually drove the minister away from Jeanne-Mance Park as the shouting continued. He was escorted by police away from the demonstration.

Quebec environment minister Benoit Charest shows up at climate march in Montreal, but gets booed, insulted and driven away @CTVMontreal pic.twitter.com/U3dtM0noEP

Before he was whisked away, he told reporters why he came to attend the march.

“We are here. We are proud of what we have done. We want to continue our work. We’ve done great things, but the work is not over,” Charette.

University and CEGEP students were leading a protest and march at the park in an attempt to draw attention to the climate crisis in the midst of a provincial election campaign.

Organizers had invited party leaders to the march and told The Canadian Press they were welcome to attend “only if they endorse our demands.”

“If you come, we want you to explain publicly that you endorse our demands and that you will support them. And if you don’t, then, no, you are not welcome here,” said François Geoffroy, a spokesperson for Mouvement La Planete, at the event.

They had two main demands: a transition away from reliance on fossil fuels by 2030 and tax increases on the 1 per cent.

Friday’s march marked the end of Climate Week at the United Nations, where the secretary general called global action on climate change a colossal failure.

An Innu family made a 1,200-kilometre trek from their eastern Quebec community to denounce pollution affecting their lakes.

“Our lakes are contaminated. Our people used to be able to eat bear meat and fish, but not anymore,” said Yan Dominic.

The event was part of the Fridays for Future Movement, an international, youth-led initiative inspired by Swedish activist Greta Thunberg, who led a massive protest in Montreal three years ago.

The organizer of the local march said not enough has changed since then.

“There are two parties that came with a clear plan validated by experts. The others, they didn’t even manage to come up with that,” said Geoffroy.

“Even those two parties are not up to the demands that we stand for and that we are here today to fight for. All parties must do more than what they are currently promising.”

Friday’s protest is one of several events that were planned across the province and around the world.

A Downtown Montreal Metro Station Will Shut For Most Of…