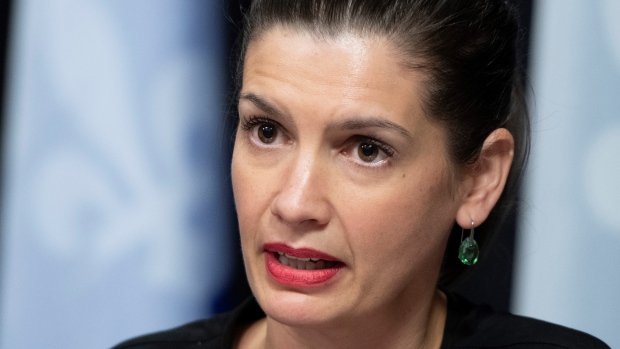 MONTREAL —
Following a startling trend of 10 men allegedly killing their female partners in four months in Quebec, the province is investing millions of dollars to help women fleeing domestic violence.

“My heart broke each time there was another femicide, and I think all our hearts broke when we learned that a woman died because of a man,” said Public Safety Minister Genevieve Guilbault Friday at a press conference on the killings, calling them “horrifying.”

She added that “domestic violence is not a new subject.”

To help the situation, Quebec is investing $222.9 million over five years for a variety of measures for survivors.

One of those measures is to provide $92 million over five years for women’s shelters.

Minister Guilbault, however, did not share any details about where the remaining $131 million of new funding will be directed. She said those details will be announced at a later date.

Broadly, however, funding is expected to go toward other measures, including services for Indigenous people, increased funding for agencies that support men with violent behaviour, and “repression of criminal behaviour” involving police services, correctional services and the Directeur des poursuites criminelles et pénales (DPCP).

“There has never been more money in the prevention [announced] by any previous government,” Guilbault said, noting that Friday’s announcement builds on $180 million in funding announced last year to tackle the issue.

Those who work in the sector said the money is a step in the right direction, and for Indigenous women in particular, it will make a big difference.

“They need more shelters in that area,” said Nakuset, the director of Montreal’s Native Women’s Shelter.

“More than half of the population of the Native Women’s shelter are Inuit and they come because there aren’t the appropriate services in their community.”

Many also said they wish it had been given earlier, and that the money will keep coming after the height of this crisis is over.

“I think it’s sad that that we need to get to 10 femicides before the government decides to take action,” said Genevieve Caumartin, whose mother was murdered by her partner.

“This could have been done long before,” she said. “I mean, my mom was murdered in 2016, and very little has been done in the past five years.”

Svetlana Chernienko, who was herself a victim of domestic violence and has become an advocate, agrees there needs to be an ongoing effort to address the root of the problem.

“We don’t have enough education-based solutions and actionable solutions to prevent [violence],” she said.

“Right now, instead of doing preventive measures, they’re trying to get into action to fix everything.”

Women’s shelters have to turn away between 10,000 and 15,000 women each year due to lack of space as occupany rates hover close to 100 per cent virtually year-round.

The province had been accused of dragging its feet in helping women escape violent situations by not committing enough funds in the budget announced last month.

In an interview with CTV News before Friday’s announcement, Melpa Kamateros, who runs Montreal’s Shield of Athena shelter, said it’s certain that COVID-19 is heightening the risks for women in violent relationships, increasing various strains on families.

At the same time, it’s also starkly showing shelters’ capacity problems—in past years, most women asking for help could be squeezed in, even if facilities were over capacity, she said.

“We’re funded for nine [beds], but we keep taking women” at the Shield of Athena emergency shelter, she said. “We’re not going to turn them away.”

But they used to be able to put people two to a room if needed, and that’s no longer safe in the pandemic.

And before COVID-19, the problems facing many Quebec women were already severe and the system was in dire need of government help, she said.

Eater’s Information to Eating and Consuming in Montreal