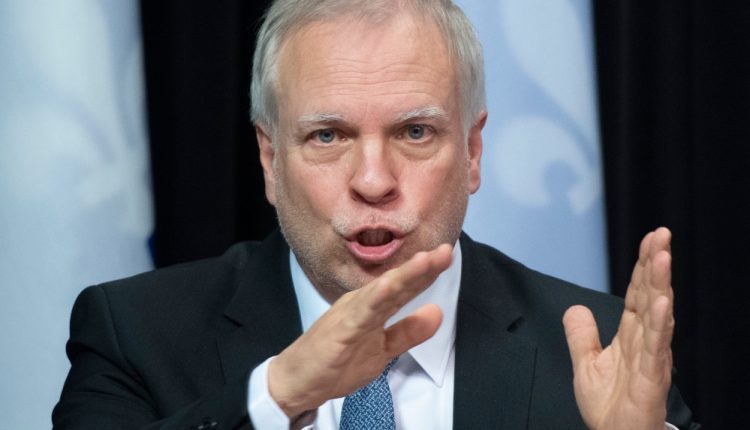 The province is headed “in the right direction” in the last two weeks, but it still isn’t out of the sixth wave and plans to keep the current mask rules in places until then, he said — but probably not past that date .

Another update will be given early next week, Boileau said, later referring to it as the “final” update.

There will likely be exceptions continuing past that date, he said, including masking in health-care settings and on public transit.

When asked how certain he was that the mandate won’t go longer than May 14, Boileau said he can’t be absolutely sure, but all signs are pointing in that direction.

If masking ends on that date, it would end the measures for the broad, uninfected population in Quebec.

The virus is still dangerous, and that hasn’t changed, said Boileau.

“The virus is still the same,” added Dr. Jean Longtin, who joined him for the press conference.

“It needs to become a bit of a normal reflex: you have symptoms, you stay home,” he said, adding that people should expect that requirement to stay in place indefinitely.

AUTHORITIES ‘DO NOT WISH’ TO HAVE MANDATORY MASKING AGAIN: BOILEAU

The two doctors later said, when asked, that even masking could still go through phases if serious crises arrive in the future — especially considering that cold weather brings worse COVID-19 waves — but that they don’t foresee it right now.

“We are at this crossroad where we have to choose between going back and living with the virus, yet knowing that some people will get the infection,” said Longtin.

“The goal here is really to minimize those who will get severe infections and hospitalization, and may die from it. So this is why the mask mandate will most likely go into different phases.”

Boileau spoke more strongly, saying that while the need for masking may arise again, he thinks it’s unlikely Quebec would go back to a mandatory mask system — instead, he said, people now have the knowledge and tools to decide to mask if another wave arises in a new season.

“We do not wish to come back with that as mandatory,” he said.

“We strongly suggested, as a recommendation, that the people could evaluate their own risk and see if they wish to take some personal measure” to protect themselves.

“I’m quite confident that in the middle of May, if the government will agree to release that measure, that a lot of people will still continue to wear [masks] because of their own situation and how they appraise the risk,” Boileau continued.

“I mean, we have to respect that, and that’s okay.”

Quebecers also need to be aware of the very real risk of reinfection with the new variant, which is highly contagious, said Boileau.

In fact, the province has changed its recommendation around this, asking people to get tested and treat any COVID-19 symptoms as a possible new infection if it’s been at least two months since their last infection. Previously, they said this was only necessary after three months.

This has changed quickly, since reinfection was very rare before December, whereas now it’s increasingly common, Boileau said.

“Even though most people will not be reinfected, [with] the current numbers we estimate about five to 10 per cent of the current infections are actually reinfection,” Boileau said.

Provincial health officials are still studying this and looking at their guidelines, he said.

“We lowered the threshold for testing from three months to two months, because we see some people getting reinfected in that timespan.”

While the broad public-health measures seem on the verge of ending in Quebec, and while the peak of the sixth wave appears to be over, Boileau also warned that nobody should be celebrating the end of COVID-19.

“The activity of the virus is still strong in the community… we still see that thousands and thousands of people are infected on a daily basis,” he said.

Twenty-three more people were reported dead from the virus in the last 24 hours, and Quebec has seen thousands of deaths so far this year as it nears the sober milestone of 15,000 dead.