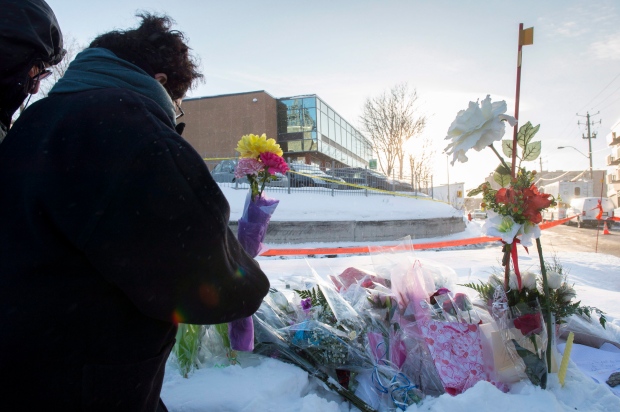 Nearly four years after the shooting at a Quebec City mosque that killed six, Quebec’s Court of Appeal is ready to hand down its decision on the shooter’s sentence.

A ruling that could change Alexandre Bissonnette’s prison term will be published at noon Thursday, according to a statement from the court.

Bissonnette pleaded guilty to the massacre on Jan. 29, 2017 that injured 19 in addition to those killed. His victims were Mamadou Tanou Barry, 42; Abdelkrim Hassane, 41; Khaled Belkacemi, 60; Aboubaker Thabti, 44; Azzeddine Soufiane, 57; and Ibrahima Barry, 39.

His sentence didn’t allow any chance of parole for four decades, which his lawyers called “unreasonable” when they appealed.

Bissonnette will turn 31 this week.

Crown prosecutors had first sought a 150-year prison term, asking for life sentences to be stacked on top of each other — an option under the Criminal Code.

Quebec Superior Court Justice Francois Huot instead opted for life imprisonment without the possibility of parole for 40 years, saying that a sentence beyond life expectancy would have been “absurd” and a charter violation.

During the appeal hearing last January, Bissonnette’s lawyer argued he should be eligible for parole after 25 years, not 40.

The lawyer argued that some of the aggravating factors the judge had taken into account during the sentencing weren’t accurately represented.

He argued that Bissonnette wasn’t motivated by “hatred” and “racism” and there was no evidence the murders were not motivated by prejudice against Muslims. Rather, he said, attacking Muslims was a way for Bissonnette to rationalize his violence.

The lawyer also denied that the crimes were carefully planned and he denied that Bissonnette targeted children.

Meanwhile, leaders in Quebec’s Muslim Community said they were disappointed by the sentence, saying it wasn’t harsh enough.

The Crown also sought an increase to the sentence during the appeal, asking for it to be extended to 50 years before a chance of parole.

— With files from The Canadian Press