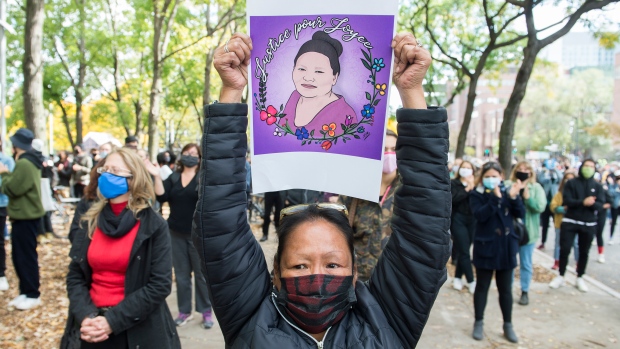 MONTREAL —
The Quebec coroner’s office says it will launch a public inquest into the death of Joyce Echaquan, the Indigenous woman who died in a Quebec hospital after filming staff insulting her.

Chief Coroner Pascale Descary says the decision comes after a request was made by Quebec Public Security Minister Genevieve Guilbault on Saturday.

The coroner’s office says public hearings will be ordered as soon as possible.

Echaquan, a 37-year-old Atikamekw mother of seven, died soon after she filmed herself from her hospital bed in Joliette, Que., about 70km north of Montreal, last Monday while she was in clear distress and pleading for help.

Hospital staff can be heard in the video making disparaging comments against Echaquan, including calling her stupid and saying she’d be better off dead.

The video has created widespread indignation, several inquiries and a lawsuit from Echaquan’s family against the hospital where she died.

The coroner’s office says the public inquest will seek to examine the cause and circumstances surrounding her death, and make recommendations.

Large crowds of people marched in Montreal on Saturday demanding justice for Echaquan and her family.

They also called for the Quebec government to acknowledge the existence of systemic racism in the province and to take real action against the discrimination Indigenous people face.

The Sprout: Strike begins in Port of Montreal