Nicola Spagnolo, a man with alleged ties to the Montreal Mafia, is charged with aggravated assault. 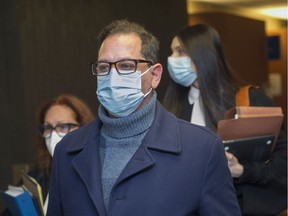 Nicola Spagnolo is alleged to have stabbed a man outside the Boho cocktail bar on St-François-Xavier St. in August 2020. Photo by John Kenney /Montreal Gazette

The lawyer representing a man on trial for allegedly stabbing a stranger outside a bar in Old Montreal two summers ago has raised the possibility that the victim touched off their argument by saying a woman who accompanied the accused on the night in question “wasn’t in his class.”

Nicola Spagnolo, 47, a man with alleged ties to the Montreal Mafia, is on trial this week at the Montreal courthouse, where he is charged with aggravated assault. He is alleged to have stabbed the victim outside the Boho cocktail bar on St-François-Xavier St. in the early hours of Aug. 1, 2020.

When he answered questions from prosecutor Matthew Ferguson on Thursday, Nadeau said the victim referred to the man who stabbed him as “un vieux crisse de riche” before he was taken to a hospital by ambulance.

At the start of the trial, the victim, whose name cannot be published, testified that he exited the Boho bar to smoke a cigarette and found a man, whom he later identified to police as Spagnolo, standing nearby with a woman. While testifying on Tuesday, he said things happened quickly and that Spagnolo stabbed him seconds after their argument began.

“I have holes in my memory” of what happened before the stabbing, the victim said while being cross-examined by defence lawyer Danièle Roy on Wednesday.

Roy highlighted how, in a statement made to police in 2020, the victim said he was surprised to find most of the people inside the bar that night “appeared to be a little rich.”

“You said the same thing of Mr. Spagnolo,” Roy suggested.

“It was simply based on what he was wearing.”

“Did you also say that he was with a woman who was too beautiful for him?” Roy asked, suggesting the comment set off the argument.

The victim confirmed he made the remark, but denied it was the cause of the dispute.

Roy then read from a statement the victim made previously in which he said: “I had a feeling the woman wasn’t in his class, in the sense that she was very pretty and he was a man who was more or less handsome. He talked as if he was above other people; that is the impression he gave me.”

The victim conceded he probably made the remark in the past.

“Can I suggest that you said to the woman: ‘What are you doing with a goddamned rich guy? You are far too beautiful for that,’ ” Roy asked.

“I certainly didn’t say something like that. I am convinced of that,” the victim said.

While watching the video, the victim had difficulty pinpointing the moment when he was stabbed. He initially said it was a moment when Spagnolo stretched his arm out toward him while both men were standing outside Boho.

Spagnolo walked away from the argument seconds later and the victim followed. The dispute resumed several metres away from the bar. Watching the video, the victim said he realized he was stabbed after he caught up with Spagnolo.

“Boom! Right in the ribs,” the victim said at a moment in the video when Spagnolo appeared to strike him.

The court was also shown footage recorded by a security camera outside Spagnolo’s home in Laval that showed him arriving at 6 p.m. on Aug. 2, 2020, in a red convertible Ferrari. A Montreal police officer who testified Wednesday said the footage recorded the first time Spagnolo arrived home after the victim was stabbed.

Spagnolo is the son of Vincenzo Spagnolo, who was a close friend to Mafia leader Vito Rizzuto. During the recent murder trial of Dominico Scarfo, the key witness, a hit man who became an informant, testified that leaders of a Calabrian clan in the Montreal Mafia intended to have Nicola Spagnolo killed in 2016, but killed his father by accident.