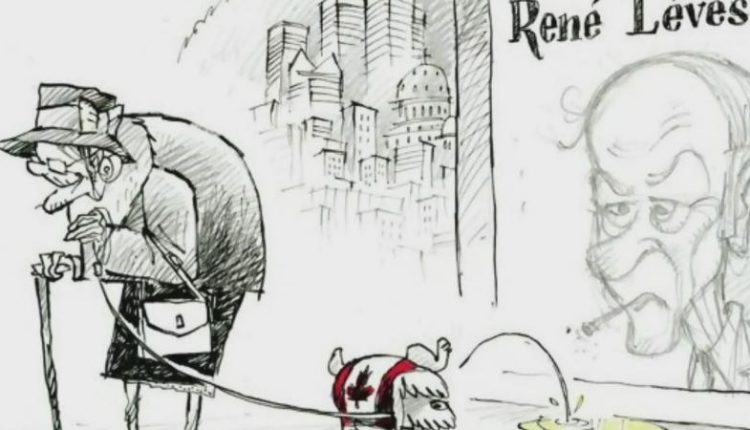 A cartoon in the Montreal Gazette on Tuesday has drawn the ire of the Parti Québécois (PQ) and others who call it a clear example of “Quebec bashing” and a stain on the legacy of former Quebec permier, René Lévesque.

The cartoon depicts a woman on a sidewalk with her dog on a leash which is seen urinating next to a poster celebrating the much-beloved politician’s 100th birthday. The dog is also draped in a Canadian flag.

“We were celebrating the 100th anniversary of an important man who believed Quebec should decide for itself and become a society on the world stage and this cartoon pisses on that,” said PQ leader Paul St-Pierre Plamondon Tuesday.

“It is Quebec bashing what we see regularly and on the founder of our party.”

The cartoonist known as Boris — a pseudonym for the artist Jacques Goldstyn — told La Presse in response to the backlash that he is, in fact, a fan of Lévesque and that he voted yes during the Quebec referendum.

“René Lévesque is a politician whom I admire enormously, I consider him to be the greatest politician in Quebec,” Goldstyn was quoted as saying in an online column published in the newspaper on Tuesday. He went on to say that his intention was to denounce the contempt that some anglophones in Quebec have for Lévesque, whose 100th birthday was celebrated by heavyweights in Quebec politics earlier this year at the Quebec National Library in Montreal. The former premier is considered the father of Quebec’s independence movement.

Even so, the cartoon has inflamed Quebec’s political world as some say it was produced in poor taste.

“I believe in freedom of expression but I have freedom, too, and I will express myself,” the PQ leader said in condemning the caricature.

In response to the outrage, the editor-in-chief of the Gazette, Bert Archer, wrote in a note to readers explaining how he interpreted the cartoon that he acknowledged “deeply upset” some who saw it.

“I took the woman as being the subject of the cartoon, not Lévesque,” Archer wrote.

“Whether she represents a stereotype of a certain breed of intransigent anglo, or simply a generation that mostly doesn’t exist in Montreal anymore, a generation that’s aged out in one way or another, I took it to be her and her careless ignorance that is the butt of the satire, not the former premier.”