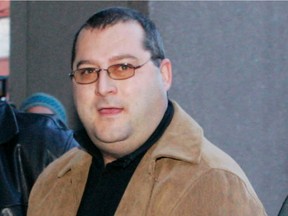 Francesco Del Balso, an admitted leader in the Rizzuto crime organization, is shown in 2006. Photo by Marcos Townsend /Montreal Gazette

Laval police are investigating a report of shots fired close to the home of a notorious member of the Montreal Mafia.

Around 9:15 a.m. Monday, a 911 call reported the sound of shots being fired, a police spokesperson said. When officers arrived, they found spent shell casings on De Blois Blvd. in the Duvernay district.

The casings were found on a street one block away from the home of Francesco (Chit) Del Balso, 52, an admitted leader in the Rizzuto crime organization.

Del Balso pleaded guilty to several charges in Project Colisée. That investigation produced the arrests of several Mafia leaders in 2006, and Del Balso ended up with one of the longest sentences after he pleaded guilty to a gangsterism charge that he and five other men led the organization between 2003 and 2006 and to having sold 10 kilograms of cocaine to the Hells Angels.

According to La Presse, Del Balso was the target of Monday’s shooting and was not injured, but the Lexus he was driving in at the time was damaged by bullets. The Laval police spokesperson said she was unaware of anyone being targeted, but noted organized crime investigators were called in to help.

As of Monday afternoon, no one had been arrested in connection with the shooting, which came just two weeks after Vincenzo Armeni, 66, another man tied to the Montreal Mafia, was killed in the parking lot of a Laval strip mall, off Highway 440.

In 2017, Del Balso’s family were the victims of a home invasion, at a different address in Laval. A gunman stormed into the home and demanded to know where he was. Del Balso was elsewhere at the time.

In 2019, a decision made by the Parole Board of Canada revealed police believed Del Balso’s life was in danger. While he was still serving the sentence he received in Project Colisée his meetings with his parole officer had to be held at a police station to ensure everyone’s safety. The parole board said the special arrangement was made “considering the instability in the world of (the Montreal Mafia) and the security concerns for you that were still in place.”

A hitman who became a police informant testified in a recent trial that, in 2016, Del Balso was on a long list of people that Salvatore Scoppa, a leader of a Calabrian clan within the Montreal Mafia, wanted to have killed. The hitman said Scoppa used a BlackBerry device that could share encrypted information to maintain the list and that it included many people who remained loyal to the Rizzuto organization after Mob leader Vito Rizzuto died of cancer near the end of 2013.

Scoppa ended up being killed at a hotel in Laval in 2019.