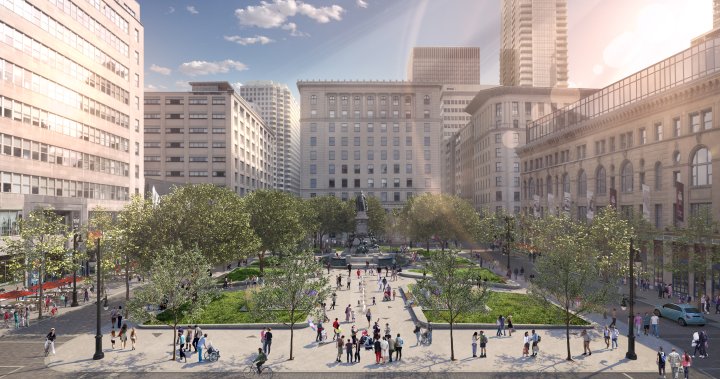 A project to redevelop Phillips Square will begin next year and is slated to last until 2021.

“One of the aspects that is necessary for us to be different from other business streets is to have places that people can experience downtown, walk around and be in a place like Square Phillips,”  Montreal Mayor Valérie Plante said at a press conference.

“People are attached to Ste-Catherine but we have to give it a bit of an oomph,” she said.

However, upgrading the historic Phillips Square requires some sacrifices.

As a result, 61 street parking spaces will be removed and the two closed kiosks that sit at the entrance of the park will also be taken away and not replaced.

“Though there won’t be kiosks right in front of Square Philips, there will be kiosks in other places — and we’re actually not against kiosks,” said Plante.

The park’s history dates back to the mid 1800s and was named after Thomas Phillips, a contract builder and city councillor who bought the land from a fur trader.

The park grew in size over the years and was quickly established as a significant downtown landmark. Other historic buildings were built around the park including The Bay, Birks and the Canada Cement Company Building.

“Now it’s time for a move that will bring it the 21st century. So, of course, for a group like Heritage Montreal — Phillips Square is a very important site,” Dinu Bumbaru of Heritage Montréal said.

It’s estimated there are 6,000 pedestrians who walk along Ste-Catherine Street West during peak summer periods.

Plante is hoping that number will increase when the redevelopment is complete.