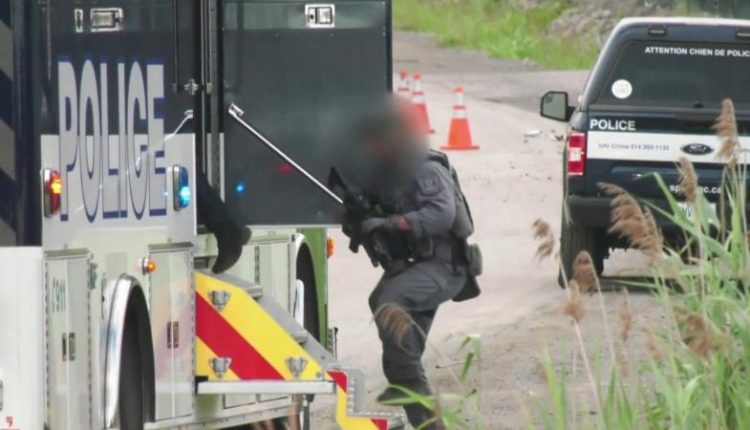 Streets are reopening in Montreal East, though a major police operation is ongoing following a shooting overnight Thursday into Friday.

Dozens of Montreal police (SPVM) officers scoured in the city’s east end to track down a suspect in the incident they say could be armed and dangerous.

“This operation is ongoing and linked with the gunshot events that occurred in Rivière-des-Prairies,” confirmed Véronique Comtois, a spokesperson with Montreal police. “To not harm the operation, no more information will be given.”

This comes after shots were fired a little before midnight Thursday evening on Maurice-Duplessis Boulevard, near 27th Avenue.

Officers found a 25-year-old woman injured at the scene. Her injuries are not considered life-threatening.

Police say four suspects, all men, fled in a car and were pursued by police. The suspects’ vehicle crashed on Broadway Ave.

They say no one was injured in the crash and that one firearm was discovered at the crash site. Firearm experts will seek to determine if the bullets match the firearm.

Two of the suspects, aged 18 and 23, were arrested immediately, police said. They cannot be identified as they are still awaiting court appearances, but police confirm they will face several charges, including possession of firearms. Other charges could be laid at the end of the investigation.

The two other men managed to escape, and police say it’s unclear if they are or were armed.

The suspects who were arrested are expected to be questioned by investigators later Friday.

On Friday morning, police believed one of the two remaining suspects was hiding in the area, which triggered the police operation. Investigators now believe the suspects both fled the scene before the perimeter was established.

Comtois described the situation as dangerous, but specified that there is no active shooter at the scene.

“The search perimeter was lifted after the necessary measures were taken to ensure the security of the area,” police said in a news release.

Tactical teams from the local and provincial police forces were out searching for the suspect. A Sûreté du Québec (SQ) helicopter and a canine unit also assisted in the operation.

“The main thing we believe is that this person’s involved in a shooting and we don’t want to take any chances with the security of the population and the security of our police officers. When we have the information that a suspect is possibly armed into a perimeter it is normal procedure to perform a large perimeter,” Manuel Couture, a spokesperson for the SPVM, said of the large perimeter in place all morning.

Police had cordoned off a large commercial and industrial area in Montreal East, from Henri-Bourassa Boulevard to the north, the Metropolitan Expressway to the south, Broadway Street to the west and Marien Avenue to the east.

Though that perimeter has been lifted, investigators remain on scene as they continue to search for evidence.