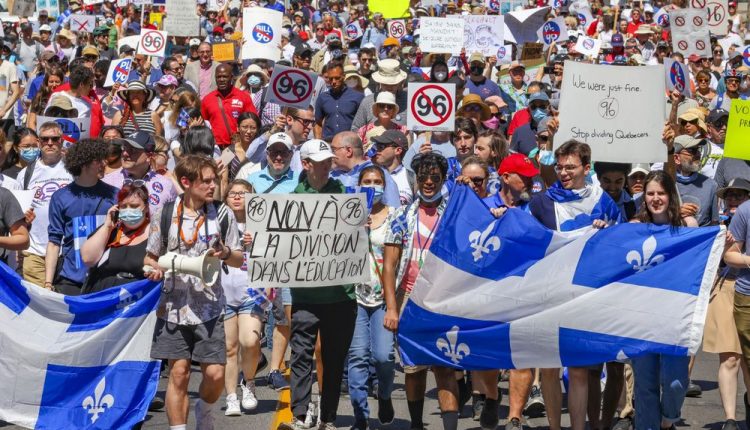 Opinion: Time to place a cease to the story of solitudes in Quebec

If Quebec has any chance of creating a thriving society (a chance that is right now in question), we must take care of all the voices trying to be heard. 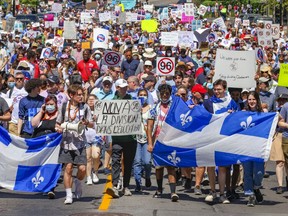 “The CAQ has thrown us onto a dark path with Bill 96,” writes Vanessa R. Sasson. Above: A Montreal protest against the bill on May 14, 2022. Photo by John Mahoney /Montreal Gazette

A story recently appeared in the Montreal news: a war of words was launched between a French baker and his English client. He served her in French, she wanted to be served in English, lines were drawn, the media pounced. I don’t know who said what to whom first, but in the end what readers learned is this: The way you order your coffee in Quebec is now (and perhaps has always been) a political act.

There is, however, another layer to this story. The argument between the baker and his client is ultimately about competing colonialist histories (and colonialist languages). Indeed, in the Journal de Montréal version of the event, the baker accused the client of acting “like a colonialist” with her English demands. But isn’t he a colonialist too?

Quebec’s unique cultural and linguistic position in North America is the consequence of two colonial powers brokering a deal that promised to serve them both. Following the defeat of the French by the British in the 18th century, the English became the rulers, but allowed the French to preserve their social and legal infrastructure. Quebec thus became both French and English at the same time. And while the arrangement might have been politically expedient, it created a tug-of-war that we continue to tug at.

The argument between the French and the English in Quebec is a remnant of a (seemingly endless) European war we have inherited and keep choosing to pursue — most recently in the shape of Bill 96. And the worst part of it is this: The most disenfranchised are not on one side or the other, but the communities who were here long before the colonial powers arrived.

Indigenous languages ​​are not on the ballot in the fight surrounding Bill 96. Politicians are not arguing for the preservation of Kanienʼkéha or Inuktitut. They are not considering the diverse Indigenous school systems throughout the province or their specific pedagogical needs, or even access to social and medical services. They are, instead, fighting about French and English, as though these are the only languages ​​in circulation, as though a fight about colonial supremacy is a perfectly sensitive fight to keep having.

But we cannot continue arguing over the heads of the most vulnerable groups on this country. We are not just two solitudes here in Quebec. We are three (and four and five). There are many communities living here, each of us with our own complicated histories and specific concerns. If Quebec has any chance of creating a thriving society (a chance that is right now in question), we must take care of all the voices trying to be heard.

We should have ended the story of Quebec “solitudes” long ago. It is a story of division, isolation, cyclical accusations. It is not a story that serves any of us well. The CAQ’s strident dedication to French nationalism is old-world thinking that has no business in a contemporary society. Their tactics do nothing to heal, nothing to bring the diverse communities together and move us forward. Instead of trying to repair the many problems Quebec faces, the government has chosen to perpetuate old narratives, separating us from each other, and ignoring indigenous people along the way.

Fostering nationalism is not the road to freedom. It never was, and it certainly won’t be now. What we need is clear thinking and collaborative efforts. The CAQ has thrown us onto a dark path with Bill 96, pushing us into an argument we did not need to have. Pushing French bakers to go to war with their English clients, as though it was the 18th century all over again.

We should be better than this.

Vanessa R. Sasson is a professor of religious studies at Marianopolis College.