After more than a year without a physical space, the museum is moving just up the Main, near the corner of Marie-Anne St. 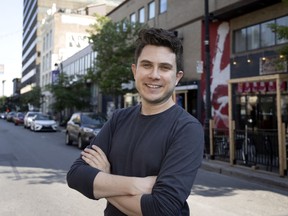 The excitement behind the announcement — posted to the Museum of Jewish Montreal’s Facebook page Thursday — was palpable. The cultural organization was kicked out of its former digs at the corner of St-Laurent Blvd. and Duluth Ave. in June 2020.

After more than a year without a physical space to centre its activities, the museum is moving just up the Main, near Parc du Portugal at the corner of Marie-Anne St.

“I’m so excited, but also relieved,” said founder and executive director Zev Moses. “Hopeful is another word. It’s been a tough year, but we’re incredibly optimistic now about the future.”

Initially called the Interactive Museum of Jewish Montreal, the museum was launched in 2010 as an online initiative mapping the city’s Jewish history, presenting talks and events, and offering walking tours on subjects including Jewish writers and Jewish food. The tours continued once the physical museum space and food counter opened at the corner of Duluth in 2016, drawing tourists as well as locals.

Along the way, Moses and his staff created a series of “community-building activities and programs,” he explained, many of them involving “younger members of Montreal’s Jewish community who weren’t feeling particularly connected to any traditional institutions in our community.”

“So that’s always been at the root of it. It’s really for everyone, people of all ages, in the Jewish community and beyond.”

When the building in which the museum was previously located was sold, in the spring of 2020, the new owner demanded the museum vacate its space by June 30. The pandemic was in full swing, leaving Moses and his colleagues in the lurch.

“It was somewhat traumatic,” he said.

But what appeared to be a setback turned out to be a blessing in disguise, as the museum team was relieved of worries about how to adapt its space to ever-changing pandemic realities, and the financial burden of paying rent.

The organization returned to its roots by focusing its activities online, maintaining in-person tours when public health regulations permitted.

“It’s been a year of learning how to run an organization in a time when everyone is virtual and people are so far apart,” Moses noted, “and finding out what people wanted and what they were looking for.

“We learned a lot about our community members — not just our members in the Jewish community, but people connected to the museum in different ways, across Montreal and beyond. A lot of people were looking for a sense of community, connection and growth in their lives. That has been a big focus of what we’ve been doing.”

The new space is a lot different than the old one. To begin with, it’s big.

“It’s triple to four times the size of the previous space, which was tiny,” Moses said. “We were bursting at the seams. This fits our needs more.”

The museum plans to continue many of the activities and events it has hosted in the past.

“We’re a very contemporary, culturally focused organization, rooted in history and the history of the Jewish neighbourhood that was there before,” Moses said. “We will still be able to lead all the walking tours from this location, which is just behind Leonard Cohen’s old house — that’s a cool connection.”

Moses has no concerns about the increased square footage.

“We will fully fill this space,” he said. “We will have more room for gallery shows, and for people to spread out at concerts, lectures and workshops. We’ll be able to breathe better.”

Speaking on Friday, Moses had yet to pick up the keys to the new digs. Located in a space formerly occupied by a bar, it will require renovations.

“We’re still looking for architects and designers, to figure out the scope of the project,” he said. “Hopefully we’ll be able to open in the first half of 2022.”