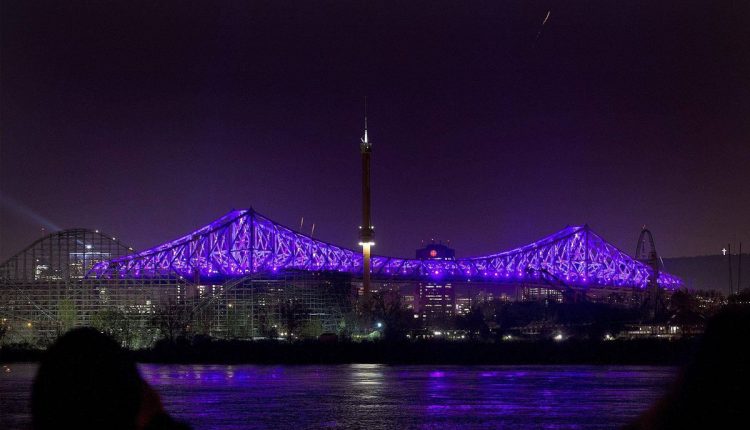 Montreal’s Cartier Bridge is all lit up, however what is the goal?

In Of Montreal, Robert Everett-Green writes weekly about the people, places and events that make Montreal a distinctive cultural capital.

In the future, perhaps, every building in Montreal will be bathed in interactive lighting effects for 15 minutes. The city or its leaders have gone a bit bonkers for civic light displays, two of which crowned the town’s official 375th birthday on May 17.

The Jacques Cartier Bridge wowed a sizable crowd in the city’s Old Port with a half-hour birthday program of interactive lights and music. If you ever wanted to see transportation infrastructure come alive to a symphony of Gustav Mahler, this was your night.

The 87-year-old bridge has been loaded with LED and flood-lighting gear, and linked to a computer program that will keep it in visible flux every night for the next decade. The cost of this gleaming mutability is $39.5-million, $30-million of which came from the federal government via the Crown corporation that owns and runs the bridge.

A few opening minutes of Mahler aside, the show was modelled on light spectacles for rock and DJ concerts. The bridge became a visual rhythm machine for several club tracks, while articulating the steel structure in ways that were often beautiful and sometimes surprising. Points of light travelled up and down the bridge’s struts, as if social insects were grooming their nest.

It looked like cheating when the display was supplemented, several times, by fireworks. This old-school manoeuvre felt a bit desperate, as if the project’s creators – Moment Factory and six other Montreal light and multimedia studios – were afraid their whiz-bang might not be enough on its own. It all seemed to work, however, for those crowded near me at the Plage de l’Horloge, who after a last round of bridge selfies, headed off to join an epic traffic jam.

It was only after the official spectacle was over, however, that Living Connections, as the lighting program is called, actually began. The hectic flashing settled down to a sedate green glow, flecked by moving points of light that are supposed to tell us something about the ongoing life of the city.

Contrary to the opening-night impression, the bridge lighting wasn’t installed to accompany music, but to serve as “a barometer of Montreal’s life and energy,” according to a statement from Jacques Cartier and Champlain Bridges Inc. More specifically, the lights mirror Twitter activity about the city. Tweet about a Montreal topic, we’re told, and a point of light may appear on the bridge. If someone likes or retweets your post, the light spreads or moves faster.

It’s not quite that simple. The programmers have also colour-coded certain topics, such as red for society and blue for technology. Confusingly, the program also associates these colours with two of the four seasons. If you see lots of red, you may not know whether the bridge is getting sociable or signalling the turning of the leaves in autumn.

Living Connections may be the visual apex of our current mass obsession with data as an always-desirable flood of information. For the next 10 years, when you look at the Cartier Bridge, you will see data, from which all usable content has been stripped. The bridge will become a beacon of things that can be tracked but not understood. You will perceive simply that some message is being exchanged, by someone, for some purpose. Is that too much information for $39.5-million or too little?

Half an hour before the bridge’s premiere, a narrative-based spectacle called Montréal Avudo lit up a nearby quay. The 30-minute show is supposed to be a “poetic homage to the St. Lawrence,” according to the Swiss-based Compagnia Daniele Finzi Pasca, which produced the show from a concept by the late Montreal circus pioneer, Julie Hamelin Finzi.

Montréal Avudo was all sound and projections, thrown onto shipping containers stacked to suggest a city skyline or a game of Tetris on pause. There were also 3-D projections on fan-shaped sprays of water shot up by fountains in the river. In these misty plumes, we saw a rising moon that looked remarkably like the real one, but closer. A ghostly ocean liner passed across four fountains, with astounding depth and presence.

These apparitions are the best reason to see Montréal Avudo – perhaps the only one. The show hits every predictable landmark in Montreal history, from the founding of the city to Expo 67, but with all the politics left out. New France begins, and before you know it, John Molson is putting steamers on the river. There’s no mention of the Conquest, even though the crucial engagement between Wolfe and Montcalm hinged on a surprise attack from the St. Lawrence.

Montréal Avudo, which plays twice a night through the summer, is a more contained and spectacular version of Cité Mémoire, the app-assisted light and history project that lights up walls in Old Montreal every night. Unlike Cité Mémoire, which recently added four new segments, Pasca’s show relies on a poorly conceived linking device. A young Iroquois girl is supposed to hold the images and time periods together, by popping up at intervals alone or with her ever-buckskinned relatives.

The intended meaning of this gambit is less clear than the producer’s default to a discredited way of depicting Indigenous people in Canada, as relics of the past with no continued existence in the present. Nobody said that being smart with technology is protection against being dumb about other things.