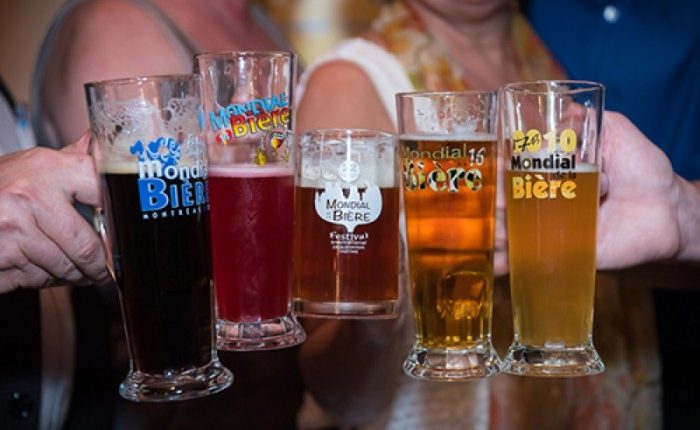 The Mondial de la Bière took place from June 10-14 at the Palais des Congrès. The festival’s name recalls global-level soccer competitions, but there’s little in the way of contest here. The mandate of “Beer Fest”—as English-speakers refer—is to bring beer-related fun and knowledge to the Montreal community.

Beer Fest was founded in 1994 by three beer enthusiasts and MontreAlers, an English local home brewing club which opened almost 20 years ago. This is the 22nd installment of the Mondial, and this year it hosted 85 breweries, including names such as Belle Guele, St. Ambroise, Dublin’s Pub, Helm, Boreale, and Dos Equis. Of the 85 breweries, half were Quebec-based microbreweries.

While many parts of the Palais des Congrès are over 100 years old, its vibe contrasted the rustic setup of Beer Fest. Facing out from the Palais, a dozen beer stands were off to the right, the wooded area spreads out to the left of them, and more seating and food trucks in the back. Beer-drinkers populated the seating areas in groups of two and three. The total walkable area was fairly small for a festival that serves 150,000 people. Back in 2011, the festival took place indoors, in a large conference-style room, and more breweries were on display each day. The current setup was more intimate and friendly.

The beer festival attracted two categories of people—those looking to drink and enjoy themselves, and those concerned with beer as an art-form. Artisanal beers are becoming trendy in cities around the world, and the Montreal craft beer scene is still relatively young. Given the growing demand for artisanal beers and the fact that the market isn’t yet saturated means that the craft beer horizon seems relatively accommodating for newcomers. In the U.S., the number of entrants in the craft distillery market is doubling every three years; Canada, on the other hand, has more craft breweries than the U.S., per capita.

The festival offered 523 products, 475 of which were beers, and the rest of which were meads and ciders. Half of the beers had never before been presented at the festival, making for a great opportunity to taste something new or experimental for only $1.00 per 2 oz tasting coupon. At that rate, a pint is set at $8.00—a relatively affordable cost as far as artisanal tasting goes. This, in addition to the festival’s free admission, offered mass appeal.

Just as artisanally disposed, Beer Fest food is an attraction in its own right. There’s smoked venison and beef, skewered bison and boar, sausages, and gourmet snacks like grilled cheeses, Bavarian pretzels, 50 different flavours of fudge and nougat, and ‘gastronomical popcorn.’

“It was really nice to be able to complement the beer with sausages and cheeses,” Catherine Preston-Thomas, a 23-year-old young Beer Fest attendee.

“Beer Fest was awesome,” he said. “I got to hang out with all my co-workers, old and young and it was really fun because everyone was excited to be there no matter who it was.”

For those interested in food and beverage festivals, the Mondial won’t take place again for another year, but in the meantime, you can check out Oktoberfest des Quebecois in Repentigny, an off-island suburb of Montreal, from September 11-13—a festival which will surely quench beer and beef cravings alike.

How Montreal meals corporations can develop whereas staying native