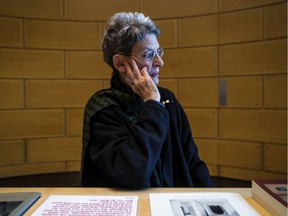 Phyllis Lambert, who turns 90 on Tuesday, at the Canadian Centre for Architecture in Montreal, Jan. 19, 2017. Photo by Dave Sidaway /Montreal Gazette

Regrets, she’s had a few. But then again, too few to mention.

Phyllis Lambert, founder of the Canadian Centre for Architecture (CCA), can look back on a lifetime devoted to heritage and urban design and say, in the words of Ol’ Blue Eyes, “I did it my way.”

Lambert, Montreal’s “Joan of Architecture,” turns 90 on Tuesday. To mark the occasion, the CCA is hosting a small exhibition on her life and work. Curated by Lambert herself, it recounts a life of architectural activism, starting with the commissioning of the landmark Seagram’s Building in New York from 1954-58.

At a press conference last week to launch the retrospective, Lambert said her proudest accomplishment is having helped “change Montrealers’ mindset” about their built environment.

“There’s been greater and greater consciousness,” she said.

“The idea of renovating a building in the early 1970s, nobody ever heard of it. You just knocked something down because you didn’t have any use for it anymore.”

She said her greatest regret was not saving the 1860 Prince of Wales Terrace, a magnificent row of houses demolished in 1971 to make way for McGill’s Bronfman Building, a bequest of her father, liquor magnate Samuel Bronfman.

“I always felt terrible,” she said.

But Dinu Bumbaru, policy director of Heritage Montreal, said Lambert has left an indelible mark on the city to which she has dedicated the bulk of her efforts and philanthropy.

“Because she is an architect, there’s a tendency to judge her career in terms of individual buildings, whereas in fact, she changed a whole city,” he said.

For example, Lambert played key roles in projects like the redesign of McGill College Ave. and redevelopment of the Old Port and in initiating public consultations on major developments, he noted.

“She has a republican approach, in the sense of giving citizens a voice on how the city is built,” Bumbaru said. 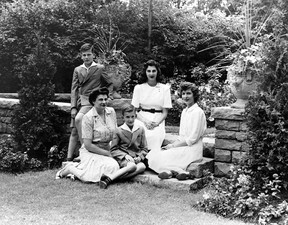 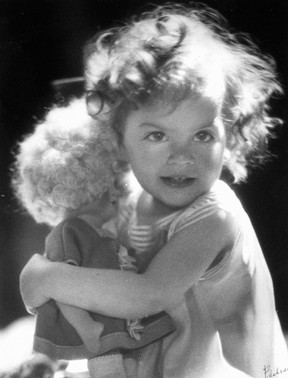 Born on Jan. 24, 1927 to a life of privilege in Upper Westmount, Lambert has been described by writer Peter C. Newman as “the most interesting Bronfman extant.”

An artistic child who took up sculpture at age nine, she inherited the legendary temper and drive of her father, who built Seagram’s into the world’s largest distiller after supplying U.S. markets in the Prohibition era.

“Art has always been for me the essence of existence,” says Lambert, who was educated at The Study and Vassar College. After the breakup of her marriage to French banker Jean Lambert, she rejected bourgeois convention and moved to Paris to be an artist.

Lambert aspired to create public monuments, not small works for private collections. “I was not ever interested in making small objects that people were going to put in their living rooms,” she says.

Architecture would enable her to realize that ambition. 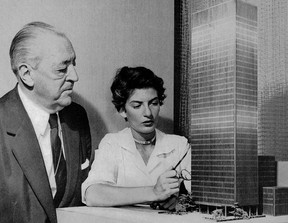 Phyllis Lambert and Ludwig Mies van der Rohe with a model of the Seagram headquarters in New York in 1955. Montreal Gazette files 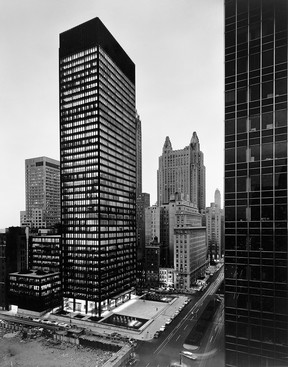 In 1954, Sam Bronfman sent Lambert the preliminary plans for a new corporate head office in New York.  She fired off a quick reply: “NO NO NO NO NO.”

Rather than “another vaguely modernized skyscraper office building like so many others,” Lambert urged her father to create “a building which expresses the best of the society in which you live, and at the same time your hopes for the betterment of this society.”

Despite his initial hesitation, he let his headstrong daughter take charge. The result, completed in 1958, was a 38-storey bronze-and-glass tower by German-American architect Ludwig Mies van der Rohe, hailed as an icon of modern architecture.

“My life began then,” said Lambert, who subsequently studied architecture herself, earning a master’s degree from the Illinois Institute of Technology in 1963, and opening an architectural practice in Chicago. Back in Montreal, her family commissioned her to design the Saidye Bronfman Centre (now the Segal Centre for Performing Arts) on Côte-Sainte-Catherine Rd. 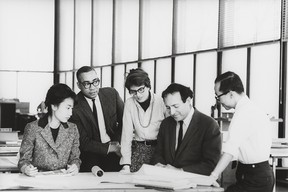 Lambert (third from left) in Master Class Studio at the Illinois Institute of Technology in 1961. Other students (left to right) are David Sharpe, Myron Goldsmith, Jin Hwan Kim, and an unidentified student. Photo by Phyllis Lambert fonds /CCA 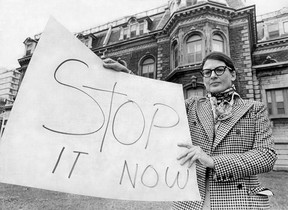 Lambert demonstrates to save the Shaughnessy House in 1973, the year before she bought it. Photo by Tedd Church /Montreal Gazette files 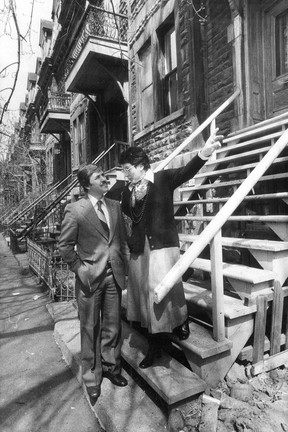 On visits home, Lambert rediscovered Montreal’s rich architectural heritage and began photographing and researching the city’s historic greystones. In 1973, the demolition of the Van Horne Mansion on Sherbrooke St. at Stanley galvanized preservationists. They formed the coalition Save Montreal to oppose the senseless destruction of historic buildings by staging protests, publishing pamphlets and working with residents. Two years later, Lambert was a catalyst for the founding of the conservation organization Heritage Montreal, serving as its first president from 1975-1983. One of its first projects was a series of “family portraits” of buildings to raise consciousness of threatened treasures. Lambert also worked closely with the Milton-Parc community to save the historic McGill ghetto neighbourhood, where residents founded Canada’s largest non-profit housing coop. 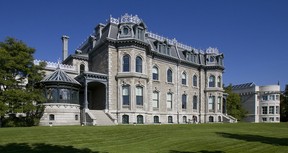 The Canadian Centre for Architecture in 2007. It incorporates the Shaughnessy House, built in 1874-75 by architect William Tutin Thomas. Photo by Dave Sidaway /Montreal Gazette files 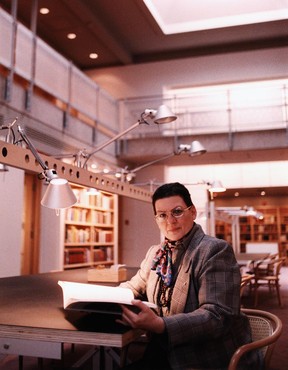 Phyllis Lambert at the Canadian Centre for Architecture in 1989. Photo by Peter Martin /Montreal Gazette files

While promoting conservation and renovation, Lambert, who had amassed a vast collection of architectural photographs, books and other documents, decided an institution was needed to foster awareness and stimulate research in the field. In 1974, she bought the threatened Shaughnessy House, two semi-detached mansions built in 1874-75 that had been owned by three of Canada’s early railway barons, including Canadian Pacific Railway president Thomas Shaughnessy. Lambert hired architect Peter Rose to design a 12,000-square-metre addition for the museum, built from 1985-89. She also commissioned artist and architect Melvin Charney to design the sculpture garden on the south side of René Lévesque Blvd., facing the Shaughnessy House, which features a ghost-like mirror image of the CCA’s foundation. A leading international research centre, it hosts lectures and exhibitions, including one last year on the “Archaeology of the Digital,” on the preservation of digital archives. 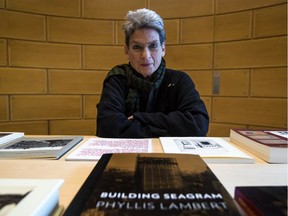 Phyllis Lambert, who turns 90 on Tuesday, at the Canadian Centre for Architecture. Photo by Dave Sidaway /Montreal Gazette 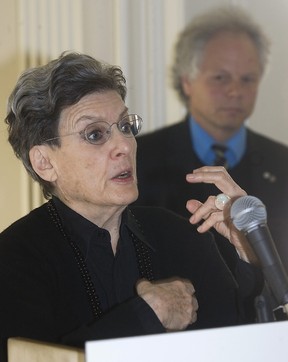 Lambert has received innumerable awards for her contributions to architecture, heritage, urban advocacy, research and museology. She is a Companion of the Order of Canada, Grand Officer of the Ordre national du Québec, fellow of the Royal Society and Royal Architectural Institute of Canada and holds many international distinctions. In 2014, she was awarded the Golden Lion for lifetime achievement by the 14th International Architecture Exhibition of the Venice Biennale. In 2016, Israel’s Wolf Foundation awarded her the Wolf Prize in Arts for her contributions to architecture over six decades.

Phyllis Lambert: 75 Years at Work is on at the Canadian Centre for Architecture until June 4. The CCA at 1920 Baile St. is open Wednesday through Sunday. Admission costs $10 ($7 for seniors; entry is free for students and children and Thursdays after 5:30 p.m.)