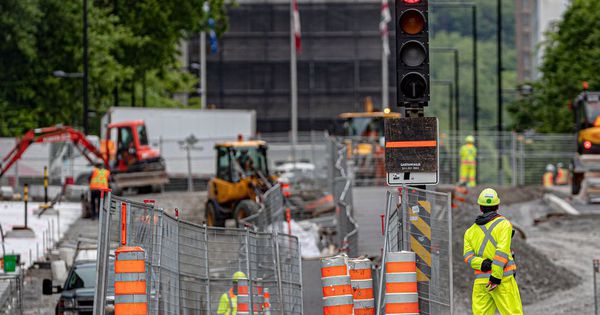 Montreal shines in orange … once more

Abdul Butt had to switch from comedy to postcards with a sardonic slant during the pandemic.

One of his creations shows five orange diversion signs enclosed by two orange construction cones. The caption below reads, “We will overcome COVID-19, but construction in Montreal is there forever.”

The city should now be bathed in red – not orange – as a tribute to the Habs that the Leafs turned upside down in a classic case of schadenfreude. Some are already dreaming of a Stanley Cup this summer, but unfortunately, even the hockey gods would have trouble finding a parade route along an unpolluted downtown street.

Welcome to the near summer in this city. The curfews are over. Terraces are open. Indoor restaurants and gyms will be available again on June 7th

the city turns orange, appropriately. There’s a cheer here that only playoff hockey can bring to Montreal. But this city is wrapped in so much orange that you might think we were transported to the Netherlands to take root in the Dutch at the World Cup.

Only eaters for punishment should ever bother to take the car tour of the city. Newspaper photographer Dave

Sidaway and I have made our plans over the past few days. Blinded by the orange, we were repeatedly hindered by diversion signs and road cones from one end of the city to the other. We stayed dizzy, we went around in circles and had to rely on our inner magellans in order not to be moored in some excavation.

Obstacles everywhere. It was our Cone-y Island again. The city could easily have turned into a bombed-out war zone in a horror movie.

If there was any good news, it was that the traffic collapse wasn’t as migraine-inducing as it could have been. But that’s because the city center is as good as free from tourists and the workers and students in the city center are mostly staying at home for the time being.

Yes, we know that our infrastructure is crumbling and needs to be repaired before the city sinks into St. Lorenz. But everything at the same time? The situation is exacerbated these days by work on building REM and condominiums – which seem to be at their peak.

It’s a great gesture that the city and province have decided to spend $ 25 million to attract visitors to our exhausted downtown area by providing 200 patio permits, public pop-up spaces, and mini-festivals. Also part of the plan is the pedestrian zone of parts of Ste-Catherine, Crescent and Peel streets and the Quartier des Spectacles. Of course, some might argue that much of the city center is already pedestrianized.

They call this initiative Les aventures du coeur de l’île. Which it certainly can be if your idea of ​​a fun adventure is catching jugglers sipping a brew and a croque monsieur on a patio too close to a cement truck dumping its cargo.

During a Mobilité Montréal press conference Tuesday, the ever-cheerful Montreal spokesman Philipe Sabourin pointed out that there will only be 48 road construction projects in the city this summer, but claimed that this is a 30 percent reduction from last year depicted what might deceive many based on what we are experiencing now.

Sabourin said there are many ways to get downtown other than by parachute, but the best would be by bus, train, or subway. He also noted that there would be free downtown parking on Friday evenings and weekends this summer – for those who could actually make it to the center, faculties still intact.

Incidentally, no picnic for pedestrians or cyclists who can find their way around the countless detours and construction sites.

In a perfect world, residents of the island and those outside the island would choose to use public transportation to take part in such an adventure downtown if they so choose. But surveys continue to show that too many are still dependent on their own vehicles and would rather have gum surgery than drive downtown for dining, entertainment, or shopping, especially if their needs are in South Shore malls, West Island, Can Be Covered, and Laval. Add to this the hassle with the constant deviations from highways and bridges leading into the city, which will be particularly intense this summer.

It might just require the Habs to win the Stanley Cup for the angry residents to forget our constant road-building mayhem. Then maybe the team will consider a river route instead of a street parade.