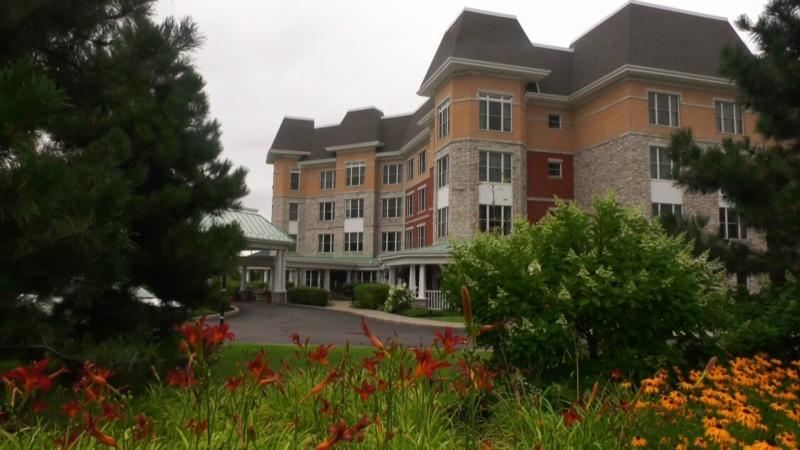 The Sunrise assisted living home on St-Jean Boulevard in Dollard-des-Ormeaux has confirmed an outbreak of Legionnaire’s disease in the building that sent two people to hospital last week.

In a memo to residents, Sunrise management tells the tenants and their families that while symptoms are similar to COVID-19, Legionnaire’s disease is not contagious.

But that’s of little comfort to some family members. John Kelly, whose 94-year-old mother was admitted to hospital, said he was given very few details about the outbreak.

“She started having difficulties breathing at the sunrise,” Kelly told CTV News from his home in North Carolina.

“The staff looked at her they didn’t know what was wrong, if she had Covid, or pneumonia, or some other kind of respiratory illness.”

So far, Kelly said he hasn’t received a formal diagnosis.

People with Legionnaire’s disease suffer from a serious lung infection caused by a bacteria that usually finds its way into cooling towers or the water supply of large buildings. It is also airborne.

In the letter to residents, Sunrise insists that all its water and ventilation systems are properly maintained and monitored on a regular basis.

Montreal’s regional health board released few details about the outbreak. The CIUSSS de l’Ouest-de-l’Île-de-Montréal said in a statement that, “We’ve identified the probable source of the outbreak, and corrective measures were put in place by sunrise to control it.”

Kelly hoped for a better explanation.

“To put my mom in the facility like Sunrise is not inexpensive. It costs a lot of money. We pay a lot of money to get top care for my mother. And along with that care we pay for answers. And I don’t think we’ve been getting answers or follow-up communications from them,” he said.

Sunrise provided a statement to CTV Tuesday evening that said there have been two confirmed cases of Legionnaire’s among residents who needed to be hospitalized. There were also four cases of Pontiac Fever at the home, which the company said were “mild” and “now resolved.” The illness is caused by the same bacteria that causes Legionnaire’s.

“Our team took immediate action to contact the Public Health authorities and CIUSSS, follow all Legionella outbreak protocol and address the source of the outbreak. Our number one concern, above all else, is the safety and security of our residents,” a Sunrise spokesperson wrote in the statement.

In 2012, an outbreak of Legionnaire’s disease in Quebec City led to the death of 14 people and dozens of others got sick. It led to a class action suit against the operators of an office building for negligence in the maintenance of its cooling towers. The case was eventually settled out of court.

6 new Montreal eating places you need to try this August