Just three days before flight PS752 was shot down from the sky over Iran, Mohammad Aminnia celebrated his engagement to a woman he described as one of the most brilliant he has ever known.

“She was full of life. Full of energy,” Aminnia said.

“She didn’t even want to sleep because she always told me, ‘life is short and I want to experience a full life,’ but I didn’t know life was going to be too short for her.”

Aminia’s fiancée was Masoumeh Ghavi. She was on her way back to Canada with her sister, Mahdie, when Iranian forces fired surface-to-air missiles at the passenger plane, killing all 176 people onboard.

Mohammad Aminnia shows photos of himself with his 31-year-old fiancé, Masoumeh Ghavi. (CBC)

Most of the passengers were headed to Canada, with many being either citizens or permanent residents. They were dentists and doctors, whole families with small children, newlywed couples and students returning from holidays.

Now Aminnia is among those calling for action. A demonstration was held on Thursday in front of the International Civil Aviation Organization (ICAO) office in Montreal.

Community is ‘angry and sad’

Demonstrators are forming a sit-in and holding a hunger strike until Sunday. About 20 people gathered during the day, and more were expected to join the protest, Aminnia said.

“The community is angry and sad,” said Aboozar Behesti, the co-founder of Women, Life, Freedom — the group behind the demonstration.

He said the protest is about condemning the ignorance of the ICAO.

Mohammad Aminnia was engaged to be married to a woman he describes as one of the most brilliant he has ever known.

“We are here after three years to just say that this inaction is not acceptable at all,” Behesti said.

“Also to remind the government of Canada that they are also responsible to put pressure on this organization.”

Protestors are criticizing ICAO for handing the investigation off to the same government accused of launching the missiles at the passenger plane — Iran.

Protesters are also calling for Farhad Parvaresh to be removed from the ICAO. Iran appointed Parvaresh, the managing director of Iran Air, as its ICAO representative.

ICAO has been silent for three years, refusing to denounce the shooting down of the passenger plane, said Behesti. He said not only does the Canadian government need to condemn the incident, but so does ICAO.

“After three years, the silence is unacceptable,” said Behesti.

“Now we are in the middle of a revolution in Iran and this is one of the crimes.”

CBC reached out to ICAO, but did not get a reply.

Canada, Sweden, Ukraine and the United Kingdom have formally triggered a process to hold Iran legally accountable for shooting down Flight PS752, the International Coordination and Response Group, which was formed to co-ordinate efforts to seek accountability and reparations over the plane’s downing, announced last month. 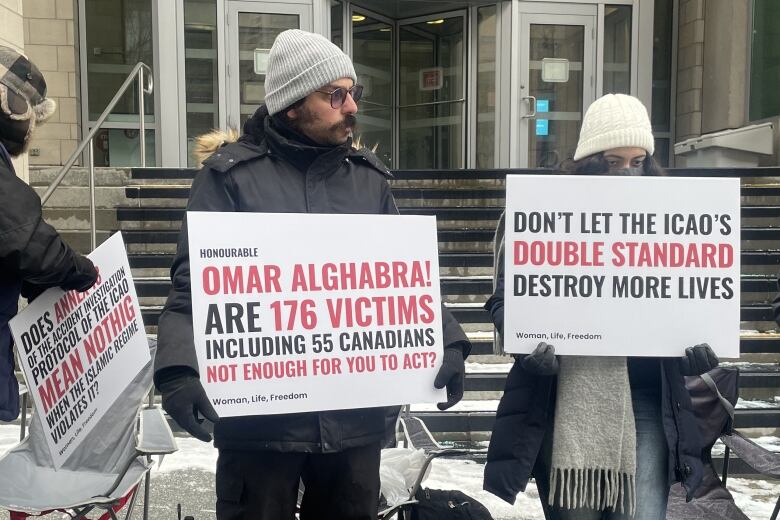 Aboozar Behesti, left, is the co-founder of Women, Life, Freedom — the group behind the demonstration in Montreal on Thursday. (John Ngala/CBC)

On Twitter, Foreign Affairs Minister Mélanie Joly said on Dec. 28: “We have taken an important step to advance our pursuit of that justice at the international level this week and will continue to work together to hold Iran accountable for this tragedy.”

In a statement, the government says the Safer Skies Initiative was launched in response to the incident as well. The initiative is aimed at mitigating risks in conflict zones, the statement says.

Nastaran Razmjoo, a volunteer with Women, Life, Freedom, told CBC News that she lost a friend when the plane was shot down.

“It’s very emotional for me to be here at this moment,” she said during the protest Thursday.

“We are asking for justice for the passengers of this flight — for their families.”

On Sunday, protesters will march from McGill University back to the ICAO office to mark the tragedy’s three-year anniversary.

Seeking the unusual and elegant in Montreal | The Impartial