Much to the delight of organizers and festival-goers, Quebec has upped the number of people allowed at outdoor live events this summer. But some organizers in the city say there are several challenges that come with pivoting plans so close to curtain.

“We cannot receive 5,000 people at once, it takes a much bigger place to do that. Because you have to respect the distancing,” she said. Her outdoor events were booked in the Parterre du Quartier Spectacle when capacity limits were lower.

On Friday, outdoor events where crowds remain relatively still, seated or standing, but without assigned seats were told their audience can be divided into independent sections of up to 500 people, increased from 250. While Rousseau says this makes it easier, shifting plans is still a challenge.

“We’re going to live it on the first day and adapt as we go along,” she said.

Festival International Nuits d’Afrique (FINA) is one of many live music festivals that give Montreal life in the summer. An event is pictured here from its 2016 edition. (Quartier des spectacles)

FINA, which showcases African, Caribbean and Latin American artists, is celebrating its 35th edition this year and will run from July 6 to 18 with indoor performances at music venues in downtown Montreal, as well as outdoor sound and light shows, intimate concerts, workshops, street exhibitions and virtual shows.

Happy to be back

Nicolas Cournoyer, co-organizer for Montreal’s bi-weekly summer electronic music festival Piknic Électronik, says he’s happy to be back in person this summer, even though he has to revamp the layout of the festival. Piknic kicked off yesterday and runs until October.

“We learned [Friday] that those measures have been softened, so we’ll be able to double the attendance for next week. So we’ll change the setup.”

While the increase in attendance at Parc Jean-Drapeau is welcome news for Cournoyer, he says it’s been difficult to plan. 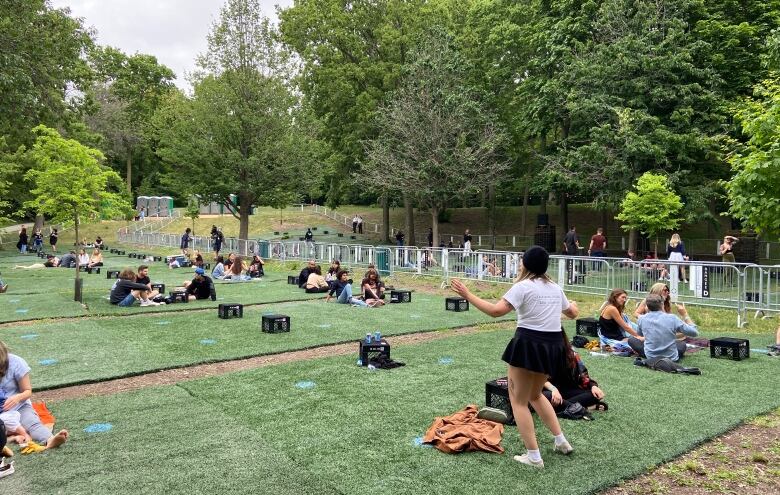 Piknic Electronik will be able to double its attendance next week amid relaxing of public health measures. (Rowan Kennedy/CBC)

“The situation for now is really better than what we expected,” he said.

“When they announced that we can have 2,500 people [earlier this year], everybody was happy. But then when you put a sketch, a map to set those distance between the people, it takes a lot of spaces to be able to have those people.”

Cournoyer says if the pandemic gets worse over the summer, he will make weekly changes to keep the shows he helps organize every Saturday and Sunday running.

For its part, Zoofest —  a comedy festival highlighting up-and-coming comedians across the province and beyond — will run from July 15 to 24. There will be 20 shows inside the Quartier des Spectacles, with capacity limits and a completely different approach to outdoor shows.

Director of operations Isabelle Desmarais says trying to plan the 12th edition of the festival has been both gratifying and a “constant headache.”

Getting a sense of the costs, planning the programs and getting production started, all while public health measures were changing was hard, she says.

“The real challenge was to see that those rules, those restrictions were changing basically every 10 days,” Desmarais said.

But she says being allowed to put on live shows this summer after minimal activity last year makes the struggles worthwhile.

“We took [the changes] with a smile because at least it led us to believe that we were going back to something that is better;” she said.

“We’ve just kept the faith because Montreal without festivals is just not the same.”