Raynald Desjardins argued he can’t be blamed if a convicted criminal happened to be behind him for much of the day on May 15. 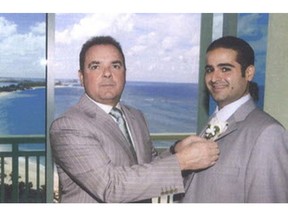 Raynald Desjardins, the man who acted as the leader in the plot to kill Mafioso Salvatore Montagna nearly a decade ago, saw his statutory release revoked this week after the Parole Board of Canada didn’t buy his attempt to explain why he was often seen with another convicted criminal.

Desjardins is serving a 78-month prison term he was left with after he pleaded guilty to having conspired to kill Montagna in 2011.

Montagna was killed on Nov. 24, 2011. Desjardins received an overall sentence of 14 years in 2016, but when the time he had already served was factored in, he was left the 78-month prison term he is currently serving.

Desjardins was once considered to be Montreal Mafia leader Vito Rizzuto’s closest ally, and the investigation into Montagna’s death revealed he was still a very influential figure in Montreal’s underworld in 2011. The plot to kill Montagna involved several people, including Vittorio (Victor) Mirarchi, the alleged leader of a clan that makes up the Montreal Mafia.

Desjardins influence perhaps explains why he was under police surveillance shortly after he was released from a penitentiary when he reached his statutory release date on April 15.

He was arrested by Laval police in May and was returned to a federal penitentiary where he tried to explain why the police who surveilled him noticed, on May 18, that he was often in the presence of Jean-Charles Denommé, a convicted drug trafficker who was also out on a statutory release as part of a 10-year sentence he is serving.

As part of a series of conditions both men agreed to when they were released, they are not supposed to associate with known criminals or people with criminal records until their respective sentences expire.

According to the summary of a decision made by the parole board on Wednesday, Desjardins initially told the Correctional Service of Canada that he did not talk to Denommé on the day police spotted him, even if they were seen dining together at a restaurant.

He later changed his story and said he spoke to Denommé for about three minutes and argued he couldn’t be blamed if Denommé happened to be behind him often on the day in question.

On July 22, Desjardins’s wife sent the parole board a letter claiming she had hired Denommé to do renovations at their home. She also wrote that she had become friends with Denommé’s sister. She conceded to the board that hiring a convicted criminal to do renovations while her husband was not allowed to associate with any of them was “a bad idea.”

The parole board wrote that it doesn’t believe Desjardins. It noted that a report it received on the police surveillance “indicated (Denommé) followed you wherever you went (to several different addresses). Additionally, you were also observed eating in his company outside a restaurant. Your parole officers say they have reason to believe that you hired this individual as a bodyguard.”

The decision also provides a summary of Desjardins’s version of what happened during the months before Montagna was killed. The portrait that emerged from the criminal case was that Desjardins, Mirarchi and Montagna tried to work together in 2010 in an effort to replace Rizzuto while he was incarcerated in the United States. Text messages exchanged between Mirarchi and Desjardins indicated they were not getting along with Montagna by the spring of 2011.

In September of that same year, someone tried to kill Desjardins in Laval.

The following is the summary of what Desjardins recently told his parole officers about the conflict: “You explain that you never met (Montagna), but that the latter would have sent two of his brothers to ask if you were on their side during the power struggle between the two clans.

You say that you replied that you ‘weren’t with anyone’ because you had taken your retirement. You believe this is the reason why (Montagna) then ordered your execution and why you were the target of an attempted murder in September 2011.

You indicate having been consulted by your former (associates) concerning Montagna and that you told them to do ‘whatever they had to do.’ You say that you did not plan anything, but you
were aware that ‘something was going to happen’.”

The parole board is expected to make a decision on whether to revoke Denommé release soon.

This Map Exhibits The Montreal Metro Community Of The Future