Montreal Mafia homicide trial: Accused feared for his or her lives earlier than arrest

The jury on Friday heard phone conversations that Marie-Josée Viau and Guy Dion had just before they were arrested and charged with murder. 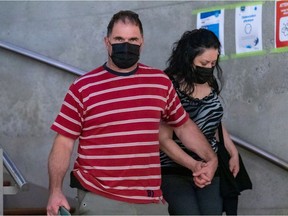 Guy Dion and Marie-Josée Viau are charged with the 2016 murders of brothers Vincenzo and Giuseppe Falduto. The couple are seen entering the Gouin courthouse in Montreal on May 27, 2021. Photo by Dave Sidaway /Montreal Gazette

A series of wiretapped conversations played for the jury hearing the trial of Marie-Josée Viau and Guy Dion on Friday indicated that, just before they were arrested, the couple no longer trusted an alleged accomplice in the double homicide they are accused of taking part in.

Viau, 46, and Dion, 49, are charged with first-degree murder and conspiracy in the deaths of brothers Vincenzo and Giuseppe Falduto.

An informant used in the investigation of the couple testified that he shot the Falduto brothers on June 30, 2016, inside a garage on Viau and Dion’s farm in St-Jude. He also testified that an accomplice (whose name cannot be published for the time being) was supposed to shoot the brothers as well but that the man panicked at the crucial moment.

He told the jury the Falduto brothers were on a long list of people Montreal Mafia leaders Salvatore Scoppa and his brother, Andrea, sought to have killed.

The informant has also alleged the couple helped prepare for the ambush, made noise to cover up the sound of the gunfire and that Viau burned the bodies before the remains were dumped in a river.

The informant completed his testimony on Thursday. Before Viau and Dion were arrested, the informant met with them several times and secretly recorded conversations he had with them during the summer of 2019.

On Friday, the prosecution in the trial played a series of phone calls secretly recorded on Oct. 16, 2019, just before Viau and Dion were arrested.

During the same conversation, the man told Dion he was aware that the hit man in the homicides had met with them recently. The mention of this appeared to put Dion on his guard.

Dion passed on the message to Viau in another phone call that was recorded. Viau then called the number that her husband gave to her and spoke with a man who said he was involved in the construction project. Throughout the call, Viau seemed very cautious. She questioned why the man was calling her from the Eastern Townships and said she was very busy with another job.

Viau then called her husband seconds later and reacted to the job offer. That call, the last one played for the jury, indicated the couple did not trust the accomplice at all and feared their lives were in danger.

“(We haven’t spoken to the hit man) since Sept. 13,” Viau said, while questioning why the accomplice felt the need to bring up a meeting that took place a month ago.

“I didn’t want to speak to (the accomplice) any longer because I didn’t know where (the conversation) was going. I find this all bizarre — very, very bizarre.”

As the couple said goodbye to each other, Viau asked her husband to “be very careful.”

The trial will resume on Sept. 13. Superior Court Justice Éric Downs informed the jury that the long break is required because he has to deal with a legal issue concerning a part of the informant’s testimony.