Francesco Del Balso admitted that, “given his profile,” he should have known reporter Félix Séguin would have felt threatened by what he told a prosecutor in October. 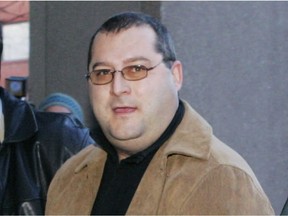 Montreal Mafia leader Francesco Del Balso asked a prosecutor if he would have to take care of TVA reporter Félix Séguin by putting him “in a container,” after a report by Séguin revealed details of where Del Balso’s family lived. Photo by Marcos Townsend /Montreal Gazette files

Francesco (Chit) Del Balso saw the lengthy sentence he received a decade ago, for having acted as a leader in the Montreal Mafia, extended by one month more after he pleaded guilty Thursday to threatening a TVA reporter.

Del Balso, one of six men who were proved to have acted as leaders in the Rizzuto organization while it was under investigation in Project Colisée, appeared before a judge Thursday at the Montreal courthouse via a video linkup with a federal penitentiary in Laval.

He admitted that, “given his profile,” he should have known TVA reporter Félix Séguin would have felt threatened by what Del Balso told a prosecutor in October.

Del Balso, 48, felt a report by Séguin in mid-September revealed too much about where his family lived and had placed their lives in danger. Séguin reported on a story alleging that Del Balso was trying to establish himself by shaking down the owners of Italian restaurants in Quebec City. Séguin quoted an anonymous police source who said it was rare to see a Mafioso operating in Quebec City. An article by Séguin that was published in Le Journal de Montréal also included a photo of the Laval house where Del Balso’s wife and sons were victims of a home invasion in 2017.

On Oct. 11, Del Balso met with a prosecutor in Drummondville in an attempt to have a peace bond imposed on the reporter.

According to a joint statement of facts presented to Quebec Court Judge Robert Marchi by prosecutor Simon Lacoste and defence lawyer Anthony Francischiello on Thursday, Del Balso told the prosecutor “that he was in the Italian Mafia. That he was a lieutenant in the Rizzuto clan,” and that he was upset over the publication of the photo of his family’s home.

On Thursday, Francischiello said that “given his profile,” Del Balso should have known Séguin would feel threatened by what he said.

Del Balso is still serving the 11-year sentence he was left with in October 2008 when he pleaded guilty to several charges filed against him in Project Colisée, including conspiracy to smuggle drugs, committing a crime for a criminal organization and violating the Income Tax Act.

Marchi agreed with the suggestion, made by both lawyers, that Del Balso be sentenced to a 30-day prison term, to be served after his current sentence expires next year. As part of the same sentence, Del Balso made a $2,000 donation to a group that helps victims of crime in Quebec, and the 30-day prison term will be followed by two years of probation. He is not allowed to communicate with Séguin during his probation.

While Marchi excused himself from the courtroom for a moment before he made his decision on the official sentence, the notoriously chatty Del Balso said: “I won’t talk to him for 100 years. Who cares?”

The Parole Board of Canada has twice revoked Del Balso’s statutory release out of concerns for his own safety, including how his close friend and fellow Montreal Mafia leader Lorenzo (Skunk) Giordano was killed in Laval in March 2016. His release was revoked again after Séguin was threatened.

According to the most recent decision by the parole board, Del Balso’s sentence has been problematic for Correctional Service Canada. He is alleged to have intimidated his parole officer in 2017 when she informed him that his statutory release was likely going to be revoked.

Guards also suspected Del Balso of having organized poker games among inmates. In December 2017, he lost his temper with a nurse when she informed him that a doctor had refused to renew a prescription for him. And in January, guards learned he was paying other inmates to steal food for him from the kitchen of the penitentiary.

Despite the concerns over his recent behaviour while incarcerated, Del Balso automatically qualified for yet another statutory release in February.

Del Balso’s brother Girolamo is serving a prison term in the U.S. after he was caught in 2016 with more than 50 kilograms of cocaine. He was scheduled to be released next July, but is now charged in a federal U.S. court based on what he said when he was arrested in Arizona.

According to court documents filed in a U.S. district court in New York, Girolamo Del Balso gave a vague statement to the officers who arrested him, including that he snuck across the U.S. border through First Nations land next to the state of New York. He also let the officers record information from an Apple iPhone and a BlackBerry that he used to send encrypted messages while picking up the cocaine.

Girolamo Del Balso’s trial is scheduled to begin Nov. 4, 2019, but his lawyer recently informed the U.S. court that Del Balso is undergoing chemotherapy treatments for “an advanced, aggressive lung cancer.”