Environmentalists praised the city’s move to buy part of Boisé Steinberg from Hydro-Québec, but say Transport Quebec must protect the rest. 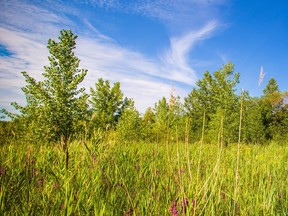 Boisé Steinberg is a wooded area in the city’s Mercier—Hochelaga-Maisonneuve borough. Photo by Facebook

The city of Montreal and Hydro-Québec have teamed up on a deal to preserve a 2.9-hectare section of Boisé Steinberg, a wooded area in the city’s Mercier—Hochelaga-Maisonneuve borough.

Residents in the area, known as Assomption-Sud Longue-Pointe, had objected to Hydro-Québec’s plan to destroy part of Boisé Steinberg, a forest southwest of the intersection of Hochelaga St. and Assomption Blvd., to build an electrical transformer station.

On Monday, the city and the utility announced they had reached a deal whereby the city will pay $27 million to Hydro-Québec to acquire about 40 per cent of Boisé Steinberg to preserve it as green space. Hydro-Québec will in turn purchase a piece of land for $23 million on an already industrialized lot north of Hochelaga St. to build its transformer station.

“This preservation of this green space, which was ardently desired by area residents, will improve the quality of life in the sector by creating a zone of harmonious cohabitation between the residential neighbourhood and industries. It is a substantial investment that shows once again the importance that our administration accords to the east of Montreal and to the protection of nature in the city,” said Marie-Audrée Mauger, city of Montreal executive committee member responsible for environmental issues.

She added that since Montreal will be hosting a major international conference on biodiversity in December — the 15th Conference of the Parties to the United Nations Convention on Biological Diversity — this deal will serve as a concrete example of what cities can do to protect natural spaces.

Environmental groups rejoiced at the news, but noted that more needs to be done to protect the rest of the wooded area.

“This is excellent news for the Assomption-Sud Longue-Pointe sector and more broadly for eastern Montreal,” said Emmanuel Rondia, executive director of the Conseil régional de l’environnement de Montréal (CRE-Montréal). “We have to recognize the leadership of Hydro-Québec and of the city of Montreal in this file, as well as the involvement of all the citizens’ groups who contributed to the preservation of this land.”

Patricia Clermont, co-ordinator of the Association québécoise des médecins pour l’environnement, said protecting natural spaces in urban areas is a boon to both human health and biodiversity. She noted that historically, the Mercier—Hochelaga-Maisonneuve borough has been neglected when it comes to protecting green space.

But both Clermont and Rondia stressed that the battle to preserve the area is not over.

“We hope Quebec’s Ministry of Transportation and Sustainable Mobility will follow suit by ensuring the protection of the wetlands situated in the southern part of the woods, which it owns,” Rondia said.

The Finest Dumplings in Montreal: The place to eat nice dumplings