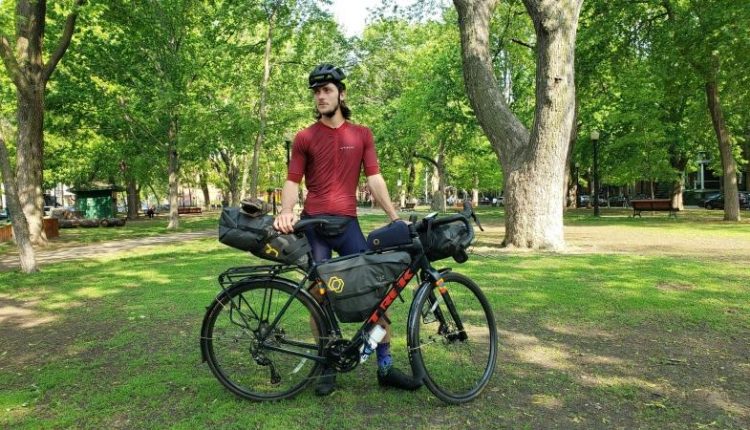 A Montreal student will cycle across Canada to raise money for organizations that support people with amyotrophic lateral sclerosis (ALS), also known as Lou Gehrig’s disease.

Hugo Lambert, whose mother died of the disease in 2020, plans to leave Vancouver on Tuesday for a 50-day journey that will end in Montreal.

“My mother, she fought through it all,” the 24-year-old said, evoking the memory of a wise, resilient woman who “always had heart.”

“She had plans to get involved in [ALS] associations,” he said. “I want to continue the work she was undertaking.”

Lambert, who is completing his master’s degree in criminology at the Universite de Montreal, has already managed to raise more than $6,000 in donations for the ALS Society of Quebec. A parallel fundraiser is also taking place in his native France, to benefit the ALS research association there.

“What we’ve raised today is already pretty cool,” he said.

An avid cyclist, Lambert thinks crossing the country is “a great way to send a message of freedom and heart” while raising awareness about the disease.

There is currently no cure for ALS.

According to the ALS Society of Quebec, “life expectancy is rarely more than five or six years, but some people with ALS live for ten years or more.”

“We didn’t expect to lose our mom so soon,” Lambert said.

“One summer, she started having trouble riding her bike a little bit,” he said. “Six months later, I would see her on crutches, and then after another six months, in a wheelchair.”

Still, the student remains optimistic that a cure will one day be found. Part of the money he donates to the ALS Society of Quebec will be used to fund scientific research on the subject.

The money will also be used for programs that help patients and their caregivers. The disease can be very costly; with at-home care, as was the case for the Lambert family, there’s often a need for a wheelchair, a call button, a lift, and the services of health care professionals, as well as access to psychological support.

Lambert’s journey can be followed on Instagram at @u_go_travel.

This report was first published in French by The Canadian Press on July 17, 2022.