Guy Dion told the jury he was led to believe a friend was simply coming over to test firearms on his property, oblivious to the murder plot. 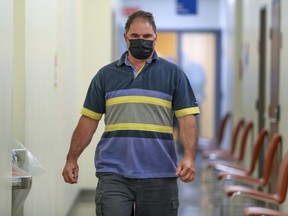 Co-accused Guy Dion walks through the hall during a break in his murder trial at the Gouin courthouse in Montreal on May 31, 2021. Photo by John Mahoney /Montreal Gazette

Guy Dion, half of the couple charged with the murders of two brothers from Montreal, testified in his own defence Monday and denied he knew what was going to happen inside the garage on his farm.

Dion, 50, and his wife, Marie-Josée Viau, 46, are charged with first-degree murder and conspiracy in the June 30, 2006 deaths of Vincenzo and Giuseppe Falduto, two brothers from Montreal. The jury hearing the trial have been told the brothers were shot inside the couple’s garage on their farm in St-Jude, a rural town 15 kilometres north of St-Hyacinthe.

Dion told the jury he was led to believe that a friend of his was coming over to test firearms on the day in question.

The key prosecution witness in the trial, a man who later became an informant for the Sûreté du Québec, said he ambushed the Falduto brothers by shooting them inside the garage and that Dion’s friend, whose name cannot be published for the time being, was supposed to help. The informant, whose name also cannot be published, said the accomplice panicked at the crucial moment and did not shoot the Faldutos.

Dion told the jury he was oblivious to it all.

He testified that he became friends with the accomplice late in 2015 and came to trust the man enough to loan him $10,000 to start a business repairing ceramics.

Shortly after that arrangement, Dion said, his friend asked him another favour.

“He asked me if he could store two bags of tools inside my garage,” Dion said, adding that he told the accomplice he had no problem with the request.

“I only noticed later that it was firearms,” Dion said. “He put them in the garage and put them on the floor. I saw that it wasn’t two bags, but it was five. And then I noticed the bullets,” Dion said in reference to firearms and ammunition later seized by police at a warehouse in Laval in 2019. “That’s when he said that those were his tools.

“I said: ‘You can’t store that here.’ My daughter had just come back from cycling.”

Dion told the jury he ultimately agreed to store the heavy bags stuffed with firearms and ammunition in a storage loft just below the ceiling of the garage.

He also testified that the accomplice said he planned to sell the firearms, and they reached an agreement where Dion would be paid $1,000 a month to store them on his property.

He said the accomplice handed him a Blackberry device that would allow them to send encrypted text messages to each other. He noted that his friend was codenamed “bag of nails” on the Blackberry.

Dion said he agreed to go out onto his property and cut wood using a chainsaw whenever he was prompted to, via the Blackberry device, by his friend. He said that during the spring and summer of 2016, his friend brought other people to practise with the firearms while he tried to camouflage the sound with his chainsaw.

He said the first people to try out firearms with his friend were the Falduto brothers.

The second time, Dion said, his friend was accompanied by the man who later became an informant and his girlfriend.

Both times, Dion said, the weapons were fired on his property and outside his garage.

The third time he was prompted to cut some wood, on June 30, 2016, he followed the same drill. He grabbed his chainsaw, turned on a radio tuned to CHOM-FM and played music at a high volume.

“I was not happy. There was never any question of them shooting inside my garage. And I had told them that if they were going to fire weapons again they should do it (on a neighbouring farm). Inside my garage I had gas, I had propane. I didn’t want them to try out weapons in my garage.”

Dion said he turned off his chainsaw and headed to the garage to confront his friend.

It was at that point in Dion’s testimony that his lawyer, Nellie Benoît, asked that he resume it on Tuesday.