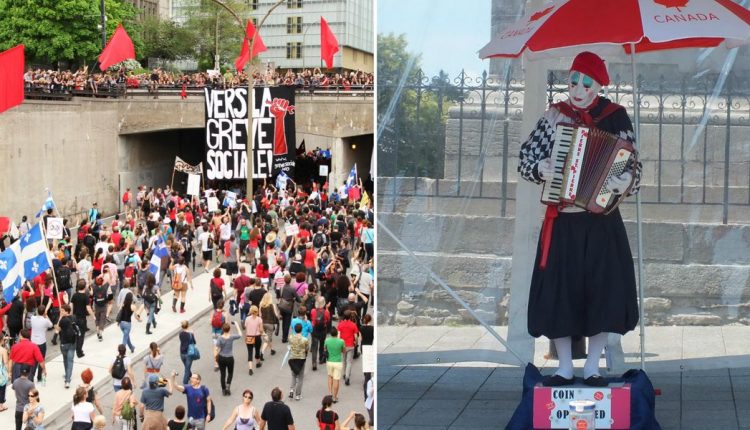 Life In Montreal: You Know You are Formally One Of Us If You’ve got Seen 12 Of These Individuals

There are some universal experiences that define life in Montreal and separate the residents from those who are just passing through.

If you’ve spent any amount of time in our fine city, you know that the streets are full of wild and wonderful characters.

Editor’s Choice: A ‘Grinch’ Has Stolen A Bunch Of Christmas Trees In Montreal (PHOTOS)

While some are ubiquitous to all major cities, there are a few that truly make Montreal, Montreal.

The Busker Who’s Way Too Good To Be Busking

You get out of the metro car and a mellifluous melody echoes through the station, stopping you in your tracks. Walking up the stairs, you spot a busker, playing for the uninterested passersby as if they’re headlining Osheaga.

And really, they should be headlining Osh because this busker is way too good to be busking. Drop a few dollars and stick around for a tune next time you see them.

The Person Smoking A Joint While Waiting For The Bus

If the person smoking a cigarette three feet away from you wasn’t enough, some person decides that the only way to make this bus come faster is if they spark up the biggest, ugliest joint you’ve ever seen.

Bonus points if the entire bus smells like weed after Cheech gets on.

The One Who’s Going To A Music Festival

Decked out in the finest floral headwear and H&M clothing, the music festival goer is blissfully unaware of you trying to go to work and also sunscreen.

I get it, you’re super excited to be standing next to 20,000 people for the next six hours to see Kendrick Lamar, but since you’re already going to a music festival, why start one in a crowded metro?

Often found in a Tim Horton’s line, the off-duty bus driver who’s very much on duty has as much right as anyone to get their mid-day caffeine fix.

Their jobs are gruelling, after all.

But you try explaining empathy to a bus full of confused-looking commuters growing angrier by the second.

As she juggles her ungrateful kids, shopping trips to Holt Renfrew, yoga and manicure appointments, the Westmount mom is never far from her Range Rover, always ready to carpool at a moment’s notice.

The Westmount mom is fashionable, works hard, and might yell at a customer service employee from time to time, but she’s pretty cool overall and isn’t afraid to show it.

Also often found in a Tim Horton’s line, the hot cop seems to only exist in Montreal, at least in my experience.

Characterized by a healthy scruff and a utility belt that seems to accentuate certain assets a little too well, the hot cop won’t hesitate to give you a silly ticket but you’ll feel fine about it.

Wait a minute, SPVM, is this by design? Get back to me.

The American Frat Boy Who Doesn’t Know How To Drink

Hailing from a school you’ve never heard of in Vermont, this annoying caricature of a dude-bro wants to challenge you to an arm-wrestling contest in the bar and chugs beer like he’s Stone Cold Steve Austin. Unfortunately, he’s 18 and this is his first time drinking.

And no, I don’t know what the best strip club in Montreal is.

The JMSB bro wears a suit to class and walks around with an air of confidence that belies the fact that he’s incredibly stressed out about competing with 400 other aspiring accountants for a handful of jobs.

It’s exciting the first time you see Brendan Gallagher at a restaurant and I’m sure he doesn’t mind respectfully being asked for a selfie, but don’t ask him every single time you see him somewhere.

The Headphones In, Texting Cyclist Who Almost Ran You Over

I have nothing against cyclists, but some of you are just flat-out dangers to society.

Nothing says “I don’t care about anything” than a cyclist who’s blasting down the Maisonneuve bike path in the middle of the day while texting and listening to music. How you have not had a huge crash yet is astounding.

The UQAM student is from les régions, studies at the Concordia Library, goes out with Anglophones, protests about literally everything and is actually really good at sports.

The UdeM student is actually from France, doesn’t go out with Anglophones, won’t stop talking about how much better the food in France is, secretly thinks the food is actually very good here, and never complains about being broke because it’s “not polite to talk about money.”

The Concordia student is actually from one of the coasts, says they know all the best study spots downtown, is obsessed with “the arts,” wears vintage clothing and lives in a $1,500/month Mile-End four-and-a-half apartment with seven other people.

The McGill student is actually from the U.S., will outdrink you, studies at the Concordia Library, has a driver’s license, wears all brand names, and complains about being broke while living in a condo downtown.

It could be the middle of the day and out of nowhere a group of sweaty first-years covered in paint and wearing neon shirts comes stampeding down the street, consuming every drop of alcohol in their path.

Better move out of the way quick before you’re swept up in their wake and end up downing several test tube shots at a club on a Wednesday night.

All you can do is shake your head at them because they get paid a lot of money to not give a damn that they are the sole reason you’re stuck in an endless line of traffic.

The opinions expressed in this article are the author’s own and do not necessarily reflect the views of Narcity Media.