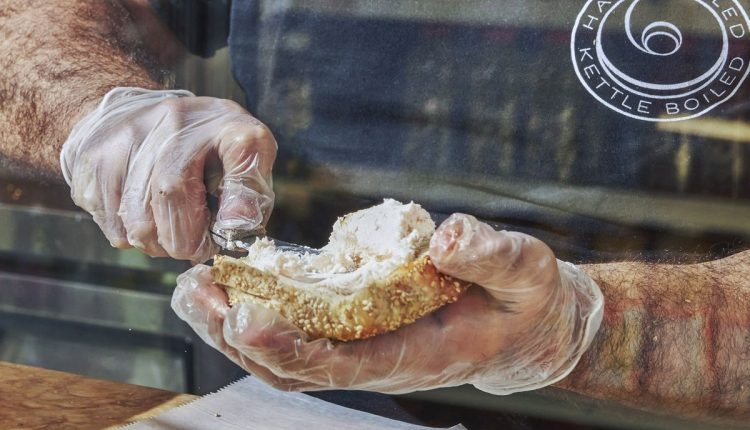 Liberté, cream cheese of alternative in a bagel-mad Montreal, isn’t any extra

A cry hath risen from the streets of Montreal: give me Liberté or give me Dreck.ADAM FRIEDLANDER/The Globe and Mail

Month four. The population is growing restive. A cry goes up from the barren streets of Montreal: give me Liberté or give me Dreck.

The full weight of the loss is finally beginning to register, as the shock wears off: Liberté cream cheese, schmear of choice in a bagel-mad city, is no more.

The terminal diagnosis came this summer. But grief has seven stages.

A chorus of outrage and despair began online – God has finally abandoned us, asked one Twitter user – but the news continues to ricochet through the city, wounding afresh.

“It’s a scandalous moment in my life,” said Martin Coutu, standing in line at St-Viateur Bagel before a spreadables fridge whose sweet potato-curry hummus and flavored Philadelphia make a mockery of the purist’s palette.

In a place where food shapes identity, nothing was more Montreal than slathering a cloud of Liberté onto one of St-Viateur’s finest – or better yet, ripping and dipping the soft sesame-flecked dough into a tub of tangy, airy spread, like a donut into a mug of coffee.

Each bite sent the taste buds traveling through time, all the way back to 1936, when the Kaporovsky family started selling dairy products from Liberty, as it was called then, by horse and buggy from their shop at Duluth and St-Urbain.

Look for old habits die hard. Certain customers at Fairmount, the city’s other prime bagelry, prefer to leave empty-handed than accept a substitute. They would as soon order poutine without the curds, or smoked meat hold the mustard.

Loyalists scoff at cream cheese alternatives. Other brands tend to be more viscous and lack that gentle sourness, which comes from being cultured, explained Kat Romanow, a Montreal food historian.

“There’s nothing that comes close,” she said.

The classic combination of bagels, cream cheese and lox is no mere trifle. It connects Jewish Montrealers, especially, to a rich culinary tradition. The dish originated in the 1930s as a response to the rise of popular but distinctly unkosher brunch staples like eggs Benedict, said Ms. Romanow.

The Kaporovsky family, Jewish immigrants from Eastern Europe, began selling their cream cheese in the same era, naming the company after the Statue of Liberty, which greeted them on their arrival in North America, Ms. Romanow wrote in a recent “elegy” for Liberte on the Jewish food website The Nosher.

“Losing this product, you’re losing the story and the history that goes along with it,” she said. “The fact that it’s no longer available is a real blow to the food culture of the city.”

Like thousands of other bereft devotees, Ms. Romanow is left wondering what happened. Would Dunkin’ Donuts stop selling Boston creams in New England? Would Molson Coors give up on Canadian in Canada?

Trying to determine why Montreal is losing such a delicacy is harder than it would seem. The corporate entities involved have been evasive. And so the plot thickens, like a slab of Philly left too long in the fridge.

Liberty was sold in 1971 and rechristened in French before winding up in the stable of General Mills, the massive US food multinational that markets such brands as Cheerios and Haagen-Dazs.

Until recently the company also owned Western Creamery, maker of a rival cream cheese that was Liberté’s closest competitor for the hearts of connoisseurs – Pepsi to its Coke. But Western changed hands in 2019 when it was bought by Gay Lea Foods.

The Canadian dairy co-operative appears to have quietly axed that brand’s full line of products some time this summer, leaving fans to marvel on social media at the bad luck of losing two great cream cheese makers in a matter of weeks.

It may not have been a coincidence.

To Mr. Restrepo, the conclusion is obvious: Western and Liberté made their cream cheese at the same plant, a legacy of their previously shared ownership. When one was shuttered, the other had to follow. The companies have been vague, he believes, because Liberté doesn’t “want to get it out there that someone else is making their cheese.” It would be like admitting that St-Viateur and Fairmount secretly bake their bagels in the same oven.

In an emailed statement, General Mills remained coy. While refusing to disclose “production details,” a spokesperson wrote: “The decision was not solely ours but we can assure you that it had nothing to do with insufficient demand.”

Gay Lea did not respond to multiple requests for comment.

Far from the boardroom rationales, mere anarchy is loosed upon Montreal. The lack of Liberté has pushed Geneviève Lachambre to take desperate measures. For a time, she called around to different grocery stores, trying to find remaining stockpiles. (“I know there was some in the Plateau the other day.”)

She has also pioneered a recipe of her own, which comes close to replicating the lamented spread: A cup of Philadelphia cream cheese, a third of a cup of crème fraîche and a pinch of salt, whipped in a blender. With this bootleg version, she believes she will survive the Liberté drought.