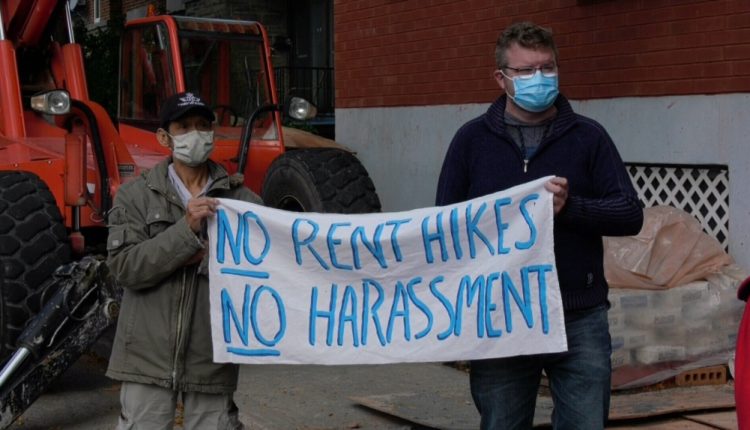 Lease hikes and renoviction: a tenant’s information to Montreal election platforms on housing

There’s one thing most Montreal voters agree on this election: the city’s most pressing issue is housing.

Whether it’s young families who can’t afford a first home, or reliable renters getting kicked out for so-called “renovictions,” Montrealers as a whole have decided their city is in crisis.

According to a poll released Thursday, half of voters named housing as a top-three campaign issue, far outstripping any other issue.

Housing worries brought together urban and suburban, east and west, young and old—though particularly the young, with 60 per cent of voters under 35 calling it their top issue.

“I talk sometimes to my young students and I really don’t know how they’re going to make it, in the housing market, I mean.”

In the Montreal area, home and rent prices have risen so fast in the last few years—almost 20 per cent each year for home prices—that damage has already been done. There’s been no corresponding jump in average income, so housing is increasingly out of reach for many people.

Conventional wisdom is that no one should spend more than a third of their income on rent or a mortgage, said Friedman, but Montrealers are now spending twice that.

“This means when they will get older and they will need that money, when people stop working or when they have some catastrophic event… they will be in deep, deep trouble,” he said.

Tenants in particular face a Catch-22, increasingly unable to break into the housing market, but also funneling more of their earnings to landlords, therefore unable to save in other ways.

To picture how much rent costs have climbed, consider that the rent on an average new Montreal lease right now is about 50 per cent more than an already-rented apartment.

An unprecedented number of tenants have found themselves homeless, with Montreal’s homeless population doubling in the last two years.

All renters face the threat of increasingly common evictions and “renovictions,” when landlords decide to sell or to break the lease, to get in on new market rates.

This is all a big change from the recent past, said Friedman.

“I’m not talking about giving free lunches,” he said. “I’m talking about a young person who graduates from university with a degree and a family” and is still unable to find a home they can afford.

“I even dare to say that if they don’t own a home by now, they may never be able to.”

Voters may care, but housing policies are famously complicated, making it hard for anyone but an expert to follow them.

So what are the three parties’ platforms, and how do experts say they stack up?

One is preserving the rental housing that already exists, and keeping the prices from spiralling too quickly as incomes don’t keep pace.

After all, a full two-thirds of Montrealers are tenants, and their average annual income is $38,800 a year, said Catherine Lussier of FRAPRU, the province’s main housing advocate group.

Housing advocates have been trying to counter two common moves by landlords.

First, there are landlords who jack up the rent as much as possible between tenants, beyond the annual increases allowed by the Regie.

This is legal, as long as the new tenant doesn’t learn what the previous tenant’s rent was and realize they’re being overcharged.

If they have this information in hand, they can go to the Regie to ask to have their own rent lowered back to within the limit.

There’s a deadline to do this, only about three months, so under current rules, if the new tenant doesn’t somehow connect quickly with the old tenant, they’re out of luck. And this almost never happens.

“It is tenants who bear the burden of evaluating whether the rent increase requested by the landlord is reasonable,” says the tenants-rights group RCLALQ.

Second, there are those landlords who turbo-charge that process, kicking out their tenants with the justification of doing renovations, and thereby getting a fresh start with a new lease—and sidestepping those annual rent-hike restrictions.

That problem has been so widespread in the last few years, it has a common name: “renoviction.”

Even more troubling is the landlords who intentionally neglect their buildings or even sabotage them, putting their tenants through mold, burst pipes, bugs or even fire damage. Such stories have abounded from organizations that work with tenants.

This kind of disrepair makes it easy for a landlord to say they need to do major work and evict the tenants, or it forces tenants to choose to end their leases.

“There are many, many stories about places in the Cote-des-Neiges area, Walkley, Parc Extension… that are in horrible, horrible condition,” Friedman said.

“And developers claim that they cannot fix those places because the rent is way too low.”

WHAT DO EXPERTS WANT?

For years, housing advocates have said one thing would make a major difference: a public registry of rents, where new tenants could see how much the previous tenants paid and challenge their landlords on too-big price hikes.

This is logically a provincial responsibility—the province handles housing rules and the Régie du Logement.

Housing groups have been asking the province for years but have been rebuffed (last month, Quebec’s housing minister again said no, calling the idea unnecessary).

These groups want the city to step in and do a registry just for Montreal.

Some also want stricter rules around maintenance to stop landlords who “run the place to the ground,” as Friedman says, and clear the way for a new lease.

WHAT ARE THE PARTIES OFFERING?

Ensemble Montreal’s registry would be voluntary and the rents would be entered by tenants.

A registry like this already exists, in fact. It’s run by a nonprofit called La Base and is funded in part by the city, under the current administration.

Projet Montreal proposes a mandatory rent registry, but only for buildings with eight units or more, which would leave out everyone living in triplexes or duplexes, much of the city’s rental stock.

Councillor Craig Sauvé told CTV that the city would ultimately extend this to smaller buildings, too.

The reason they’re doing it in stages, and can’t simply start forcing all landlords to report their rent, is that “we don’t have the legal ability to oblige” them, he said. Creating a simple rent registry is something only the province can do, he said.

However, the city does have one way to do it—to include that rule within a bigger program, Sauvé said.

What the Plante campaign is really proposing is a “responsible landlord certification program” where landlords of bigger buildings would need to pay for their own building inspections and submit various information to the city to maintain their certifications in good standing.

The measure would come into effect in late 2022 or early 2023, Plante has said, and would allow the city to “monitor” these properties, learn what’s being charged, and evaluate what’s really going on when a landlord declares the need to renovate.

As for when the measure would be extended to smaller buildings, Sauvé couldn’t give an estimate. Because the certifications involve costs and paperwork, the party judged it would be easier to ask it of the bigger landlords at first, which he said had more “resources” than many triplex owners.

But he said the fundamental idea will give the city a new kind of teeth, going beyond fines for non-compliance.

“We can put a note in [landlords’] credit report, which they really, really hate,” he said.

Municipal fines “are determined by provincial law and they’re really not that high… they’re not that good of a lever,” he said.

“We put a little note in their credit report, all of a sudden they move.”

Coderre’s team is also promising tougher rules for landlords, in less of a strict overall framework, among some other ideas.

They would require commercial landlords—not residential, it appears—to conduct an accredited inspection, every five years, of their units that are more than 20 years old and send the reports to the city.

The party would also, however, create funds to encourage landlords to renovate, including putting extra money into the city’s renovation programs, and creating a subsidy for the renovation of substandard housing that would equal a year’s increase in the property tax.

The party also proposed creating a “housing bank” for families that find themselves without housing in the annual July 1 Moving Day race. It didn’t respond to CTV’s requests for more detail on the idea.

Mouvement Montreal has also proposed a rent registry and a landlord certification system, but few details are available. The party has been asked to provide more information.

In fact, the housing advocacy groups don’t, and can’t, endorse political candidates, as they receive funding from the province.

Both FRAPRU and RCLALQ said they want Plante to immediately extend her rent registry idea to all buildings, regardless of size.

Both said Coderre’s idea of a voluntary registry won’t work, with CLALQ calling it “very disappointing.”

FRAPRU will release a point-by-point report card on the two platforms on Thursday.

The association of Quebec landlords, CORPIQ, also didn’t endorse a candidate in their release on the platforms, but said that in “two divergent visions” for rental housing, “Ensemble Montréal wishes to eliminate a series of irritants that are a hindrance to residential development,” while Projet Montreal plans “actions that will be financed with public funds.”

“Valérie Plante’s party is betting on quasi-punitive actions towards Montreal’s landlords, by projecting the idea of a certification program and a lease registry,” the group wrote.

Maxime Roy-Allard of RCLALQ also said that no party seemed to address one potential tool it has—permits for renovations.

Renovictions “are partly their responsibility since it is the cities that issue the renovation permits,” he wrote.

“In our opinion, no permit should be issued if this results in an eviction of tenants.”

Despite the dire numbers around housing, there’s a silver lining to the crisis, say those in the field.

“What I’m very happy about is that housing is much more of a subject, it seems to me, in this election than it was ever before,” said Anne Cormier, a professor at the Université de Montreal’s architecture school.

The second key issue is creating more affordable housing and social housing – and understanding what those terms mean in the first place. Read CTV’s story about two warring visions: to ‘flood the market’ with new developer units or build fewer, but with less reliance on the private sector.

The place to Eat in Montreal