The tide of the St. Lawrence River fills and empties the moat surrounding the historic Royal Battery in Quebec City’s Petit Champlain neighbourhood. And from now until October, thousands of life vests of all shapes and sizes attached to the old greystone walls of the battery will float with the tide.

In all, 2,000 life jackets adorn those walls — part of an exhibition simply called Life Jackets, by Chinese artist and humanitarian activist Ai Weiwei.

The display is an effort to raise awareness about the refugee crisis and mass migration, and every single plastic and fabric buoyancy device, neatly aligned in rows, tells one refugee’s story.

The Chinese artist collected an estimated 14,000 life jackets in 2016 on the island of Lesbos in Greece. The life jackets were left behind by Syrian refugees as they fled the civil war in their homeland, said Vincent Roy.

Roy is the general and artistic director of EXMURO, a Quebec City non-profit organization which has a mandate to design, create and disseminate contemporary art projects in public spaces.

He invited the Beijing-born artist to display his art in Quebec City. The organization was then sent the 2,000 life jackets with instructions from Weiwei to assemble them on the wall and then dispose of them afterward.

Life jackets sized for children were among the 2,000 sent to Quebec City and hung on the Royal Battery. (Sylvain Roy Roussel/CBC)

“Artist and humanitarian activist Ai Weiwei is renowned for his committed, iconoclastic and subversive practice that criticizes the imbalances of economic, political and social power in the world,” EXMURO said in a news release.

“Ai Weiwei is considered one of the most important living artists on the international scene.”

His works are included in the permanent collections of the Centre Pompidou in Paris, the Los Angeles County Museum of Art and the Museum of Modern Art in New York City.

The project took 15 people 10 days of work to assemble on the Royal Battery, which is a military defence structure built by the French in 1691 to thwart English invasions. 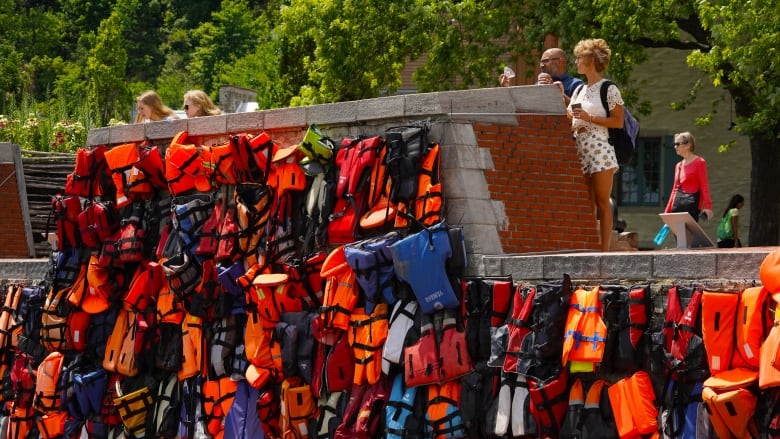 The 2,000 life jackets come in a range of sizes, colours and materials, all found on the island of Lesbos in Greece. (Sylvain Roy Roussel/CBC)

‘The installation is alive’

Michelle Drapeau, project co-ordinator with EXMURO, said the movement of the tide is an integral part of the artwork.

“It’s like the installation is alive because the vests will float up and down. It’s kind of like it’s breathing. You keep that connection to the water — the idea of these thousands of vests floating in the water,” she said.

“It’s a very dark image when you think about it.”

You can also see hanging on the battery, life jackets of all different sizes, including hundreds sized for children, Drapeau explained.

Those smaller life jackets were “really tragic to work with. It really gives you pause,” she said.

The life jackets are part of a larger display in the city called Passages Insolites.

The display includes 20 artworks “dreamt up by contemporary artists from near and far,” the organization’s website explains. People can follow a map to see them all.

“In Passages insolites, we try to create moments of beauty, but also of questioning,” said Roy.

Listed here are 10 locations you may volunteer at in Montreal