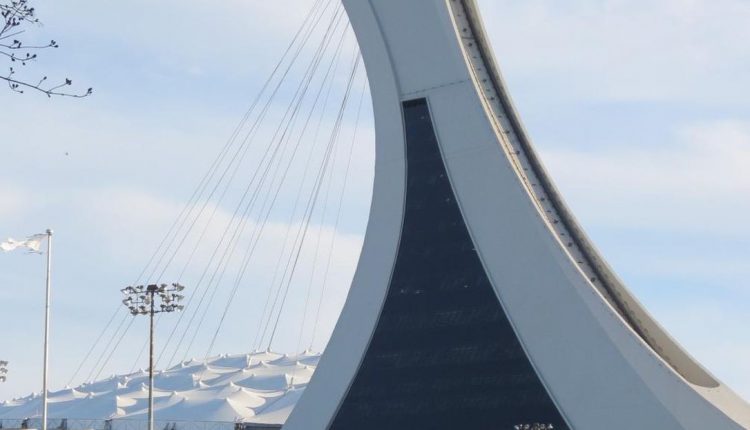 Go to the leaning tower of Montreal

MONTREAL—Many people thought it looked like Big Bird, the gangly and friendly character on Sesame Street.

But the tower looming over Montreal’s 43-year-old Olympic Stadium has been projecting a different image of late.

It has graduated from a hollow concrete shell that was the butt of many jokes to a modern office building that now holds a world record. It’s the world’s tallest leaning tower.

The iconic Leaning Tower of Pisa has a 3.97-degree slant. The Montreal Tower, as it’s now called, leans out at a 45-degree angle.

The Olympic Installations Board, an agency of the Quebec Provincial Government, recently spent $200 million to turn the structure into a modern office tower. Previously the tower had no electric wiring, no elevators and no windows. The refurbished product looked and operated so well that it enticed Desjardins Group to lease 80 per cent of the tower and move 1,000 employees out of a nearby office and into the tower.

The ground floor of the tower is home to one of Canada’s finest sports-training and recreational facilities. Elite athletes from around the world come to the Olympic Parc Sports Centre to improve their game, hone their talents, practise routines and get superbly fit.

The seven different swimming pools in the sports centre are also open to the public. The Montreal Alouettes football team has indoor practices in a large gymnasium in the sport centre.

The most challenging task facing the Montreal architecture firm Provenchen Roy was to get natural light flowing into the building. It had solid walls of precast concrete panels and much of that had to be replaced.

Provenchen Roy turned to the Toronto glass firm Flynn to build and install a glass curtain wall covering 60 per cent of the tower’s east side, west side and south side. The original concrete façade had a distinctive curve to it and the new bronze-tinted curtain wall wasn’t going to match the curve, so new concrete panels with less of a curve replaced the old concrete panels nearest the curtain wall.

A glass-enclosed funicular rides up the sloped north side of the tower to an observatory up on the 55th floor that offers an 80-kilometre view of Montreal and the St. Lawrence River Valley. The observatory has diagrams that explain why the tower doesn’t topple over. The observatory and upper floors weigh 8,000 tons, but the wide base of the tower weighs 145,000 tons and is anchored 10 metres into the ground.

The observatory also displays the history of the Olympic Games and the history of Montreal’s Olympic Stadium. It shows Bruce Jenner winning a gold medal in the decathlon. It explains that the Montreal Expos were the best team in major league baseball in August 1994 and were apparently World Series bound, until the players union went out on strike and the season ended early.

However, there is no depiction of the Guns ’N Roses riot in August 1992 that spilled out of the stadium and into the streets of East Montreal with overturned cars, fires, shop break-ins and damaged public spaces.

There’s a huge underground parking lot adjacent to the tower. Olympic Stadium still has most of its 60,000 seats and Cedric Essiminy, marketing director for the Olympic Park, said the seats have to go. They’re 43 years old.

Essiminy said there were many different proposals over the years on what to do with the tower, including hotels, restaurants, even a homeless shelter.

There’s still 20 per cent of the tower space available and other companies are looking at it as their new home.

There are two separate subway stations at Olympic Park and one of them is adjacent to the Sun Life Esplanade at the far end of the stadium from the tower. The esplanade hosts First Fridays on the first Friday of each month from June to October, where 50 food trucks arrive and attract 15,000 street food enthusiasts. There are plenty of bands and other entertainment at First Fridays.

The velodrome was also built close to the tower for the 1976 Olympics to host bicycle races and judo. Since then, it has been converted to a biodome that visitors can wander through that depicts four different ecosystems found in North America.

The city of Montreal had proposed a huge renovation of the biodome to start this year, but construction is on hold and the venue closed because Montreal is afflicted with a severe shortage of qualified labourers.

Pat Brennan was a guest of the Montreal Tourist Board, which did not review or approve this story.