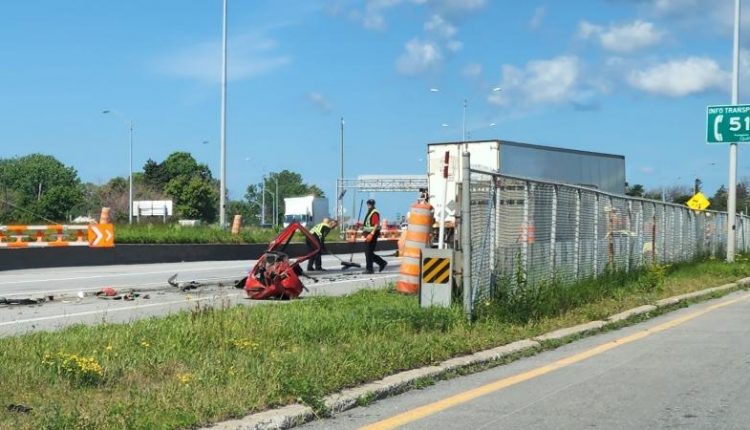 A multi-vehicle crash involving a semi-trailer and a truck carrying cows resulted in the closure of westbound Highway 40 in the West Island on Wednesday.

The incident took place at 9:45 am near the Anciens-Combattants Blvd. Entrance as the semi-trailer was changing lanes and collided with the smaller truck.

The truck driver was injured and trapped inside his vehicle, causing firefighters to use jaws of life to evacuate him. The driver was then taken to a hospital where he is “in stable condition and conscious,” said Montreal fire department spokesperson Louise Desrosiers.

All westbound lanes are closed to traffic in the Île-aux-Tourtes Bridge area. Firefighters are urging all drivers to get off Highway 40 before the Senneville exit.

The truck driver was transporting eight cows, none of which were injured.

The semi-trailer driver was not seriously injured and was not taken to hospital.

All emergency services are present on scene while the highway section remains closed, confirmed Nicolas Scholtus, a spokesperson for the Sûreté du Québec.

Montreal Has A New Resto-Wine Bar With Main Farmcore Vibes