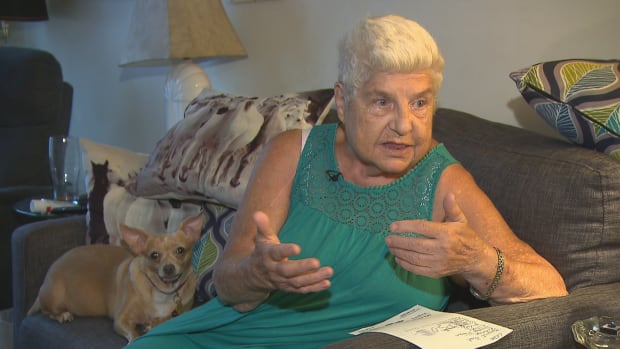 Claudette Cazeneuve knows how hard it can be making that first trip to a food bank, but she wants people to know there’s no shame in getting help.

She used to dread the trips to Super-C because of the prices.

“We had two little shopping bags and it cost us close to $100,” said Cazeneuve, who usually shops alongside her daughter.

“I would go around and think, ‘Oh God not this week.'”

The 83-year-old lives on a fixed income, her budget stretched thin over recent months with the exploding costs at grocery stores.

“For me, it’s a big help,” said Cazeneuve. “I wouldn’t have said that six months ago, but now we need it.”

Lisa Stivaletti, a volunteer with the Hope Food Bank in LaSalle, says people over 60 are currently making up a large part of their clientele.

“They’re dipping into savings and they’re having a hard time making ends meet,” Stivaletti said. “There’s also adult children who are now coming in for their parents.”

Inflation reached 8.1 per cent in Canada in June, a 39-year high according to Statistics Canada. Since last May, that’s included a rise of 8.8 per cent in the cost of food.

More students and the “working poor” are also turning to food banks, a shift in demographics since the pandemic, said Martin Munger, executive director of Food Banks of Quebec.

It’s seniors on fixed incomes paying the biggest price when it comes to inflation, said Pierre Lynch, a seniors’ rights advocate in the province.

“The most vulnerable people in our society are really struggling and in fact … all the other ones that are making $21,000 or $23,000 are slipping slowly down to that group,” said Lynch, the president of the Association québécoise de défense des droits des personnes retraitées et preretraitées.

“They’re getting poorer by the minute,” he said, saying provincial and federal pensions need to be indexed to inflation.

Suzanne Scarrow of the West Island Mission says demand has exploded in the last few months due to the rising cost of living. They are also seeing fewer donations from the community and corporate partners.

It’s an even more dire situation for the two thirds of seniors in province that don’t have employment income or their own pension plan.

A single adult needs roughly $28,783 per year to live comfortably in Montreal, according to a December 2021 estimate by Institute for Research and Development on Inclusion and Society.

Beyond covering basic needs, that also covers expenses that can come with unexpected emergencies.

“Fruits, vegetables, meats, eggs: we’ve seen inflation on most of these products. The price of gas is also significantly higher, and this is what is so hard about the current situation,” said Sebastien Betermier, an associate professor of finance at Desautel’s Faculty of Management at McGill University.

With geopolitical issues like the war in Ukraine driving inflation, the economist says it’s unpredictable when costs could come down. He recommends planning ahead for at least the next two years to see where costs can be cut.

“Just planning ahead eases the anxiety that we face, and it becomes a lot more manageable,” he said.