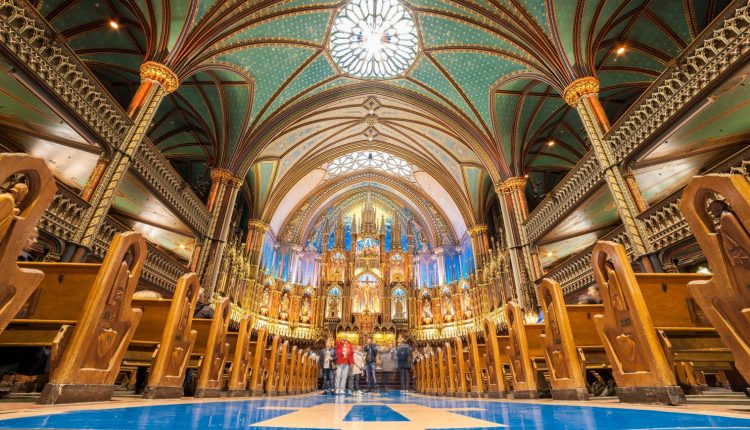 At Montreal’s expansive Musee d’Archeologie et d’Histoire Pointe-a-Calliere, a guide encouraged me to watch a short film on the founding of one of North America’s oldest and most cosmopolitan cities. Hypermodern and three-dimensional in presentation and scope, the film is a sweeping, rapturous exploration of pre-settlement Quebec, conquest, revolution, and rapid industrialization.

The museum also traces how Canada’s first metropolis, above all, was France’s gateway to the continent clear through to the Gulf of Mexico.

By the 1700s, global ambitions were playing out with remarkable speed and force across the province of Quebec: Britain would wage war for seven years to wrest it from the French. American revolutionaries later would try in vain to convince the French Quebecers to join their cause.

None of this, of course, might have been predicted by Jacques Cartier when he landed at the Iroquois village of Hochelaga at the foot of Mount Royal in 1535. Nor, for that matter, could Paul de Chomedey de Maisonneuve when, in 1642, he founded the first permanent mission at Montreal.

[The best way to celebrate Canada’s 150th anniversary? On the railway. All the way.]

But it is why Montreal is now filled with jubilee sentiment as it marks 375 years since its founding, with special exhibitions, concerts and festivities, including projecting images of historical figures on trees and walls throughout the city.

I was unaware of any of this until after arriving in Montreal in early September to start a tour of Quebec. The U.S. dollar was (and continues to be) strong against its Canadian counterpart, which was an incentive to visit. At the time, the run-up to the United States’ general election was in full swing and I was rather desperate to exit the country for a reprieve.

And that’s exactly what I got in Montreal. Everywhere I turned, I delighted in its flair and esprit — and its distinctive haute (though reasonably priced) cuisine. The 18th-century French spoken across the province seduced me, and I met with friendliness when I sheepishly asked if someone spoke English, half expecting that I’d be dismissed as I had been in France on occasion.

W hile my tour did include a stay in Quebec City, I was keen to concentrate on Montreal and its surroundings: In venturing northwest of the city, to the lush hills of the Laurentians, I found spectacular fall colors while cycling along the Riviere du Nord and around placid lakes, as well as an inviting bed-and-breakfast nestled in a shady valley.

But I spent my first days in Montreal, wandering leisurely along narrow side streets and the historic Vieux Port. By early afternoon, I was at the Place d’Armes, staring up at the iconic Basilique Notre-Dame de Montreal.

I had seen pictures beforehand of the Gothic Revival church’s ornate illuminated altar, and thought the vibrancy must have been Photoshopped. But I was wrong. My eyes popped at the colors borne of fractured light through intricate stained glass windows and the carved pulpit. Seated in a pew, I read that not a single nail was used to build the church, which was completed in 1829.

A fried-rice dish with soft-shell crab at Orange Rouge in Chinatown, a top Asian-fusion restaurant that looks like a cross between a speakeasy and an opium den. (Orange Rouge)

From Notre-Dame, I walked to Chinatown, where I had reserved a table at Orange Rouge. But from the outside, I wondered if I had gotten the address right because this restaurant, recommended by several guidebooks, appeared to be a cross between a speakeasy and an opium den. But appearances were deceptive; my eclectic meal of mint-and-goat-cheese salad, and roasted-and-sauteed squid with red cabbage, kimchi and peanuts in a fried taro bowl, was incomparable. Before ordering, I asked the waiter about a “chrysanthemum” salad, the taste of which I couldn’t begin to imagine, and he nicely offered to bring me a small sample, which I enjoyed. Dessert, too, was unusual but inspiring: a banana-nut-bread sandwich filled with parsnip ice cream.

Another day, I strolled along the Rue St.-Denis after passing through the Universite du Quebec a Montreal, and stopped to buy a poutine from a street vendor. Earlier, some French friends had insisted that I try this classic comfort food of fries drowning in cheese curds and gravy. Supposedly, this cherished dish, if you will, was concocted by a restaurateur in rural Quebec when a customer ordered fries while waiting for his cheese curds. Folklore aside, I was skeptical, if not a bit intimidated.

But after ordering and picking up my fare, which included sauteed mushrooms and bell peppers, I walked eastward to Parc la Fontaine and found a bench on the banks of the large lake there, where I unpacked my decadent and very tasty meal.

I headed the next day to the Musee des Beaux-Arts de Montreal. When I arrived, however, the building appeared impenetrable, with trenches, cranes and scaffolding concealing the entry area. The museum, I had read earlier, was adding on a new wing — its fifth — but fortunately remained open. After some dead ends, I entered Canada’s oldest — and Montreal’s largest — art treasure trove.

First, I took in the limited, though poignant, Asian and Islamic art collection, drawn particularly to earthenware from Basra and Persia, then goblets, candlesticks and bowls from Syria, then an especially handsome late 18th century incense ceremony cabinet from Japan, the lacquered wood elaborately covered with mother of pearl inlays and pewter.

[When school’s out, a Canadian dorm stay could open the door to big savings]

On the same floor, I saw refined furniture dating from Quebec’s frontier days and later lingered in a room dedicated to haunting Inuit sculptures, in basalt and ivory, of serpentines, deep-sea demons and tenacious seal hunters. From there, I drifted to a hall showcasing Canadian painters, none of whose names were familiar. But I was instantly wooed by Alfred Pellan’s surrealism and Edward John Hughes’s moody renderings of thick forests and still lakes.

The next day, it was as if I was transported directly into that landscape. After a two-hour bus ride northwest from Montreal, I arrived at the village of Val-David, in the heart of the Laurentian countryside.

There, a fellow passenger and Val-David resident, who disembarked when I did, offered to give me a lift to La Maison de Baviere, where I would be staying.

I was instantly charmed by the colorful, flowery Bavarian motifs on the facade and above the front door, as well as a garden overlooking the Riviere du Nord as it roared over boulders and under a pretty bridge. My room, happily, looked onto the same, as did my terrace table that evening up the road at microbrewery Le Baril Roulant. Though I was far from urbane Montreal, one offering gave it a run for its money: locally caught trout covered in a light pastry and sauteed in coconut milk and caramel beer.

The morning after, I chatted with other Baviere guests and the inn’s owner, Josée, as she prepared our breakfast, which included locally produced ham with a drop of maple syrup and egg pie with Gruyere cheese, along with apple cider. Afterward, she sat with me, looked over a regional map and pointed out an area where a cycling tour would do me well.

With that, I meandered with my rented bike to the path known as the Parc Linear, which follows the river’s curves and weaves around placid lakes, one with a memorable solo canoeist, and through dense forest. Every now and again, I would stop to simply admire the lay of the land bedecked in nascent fall color — not unlike, I imagined, what those early explorers might have done 375 years ago.

Zach is a writer based in Northern California. Her website is elizabethzach.com.

Correction: An earlier version of this story referred to Montreal as the capital of Quebec. The capital is Quebec City. Additionally, the Quartier Petit Champlain is in Quebec City, not Montreal. This version has been updated.

Spring in Montreal, as sweet as maple syrup

Montreal: How to get there, where to stay, what to do and more