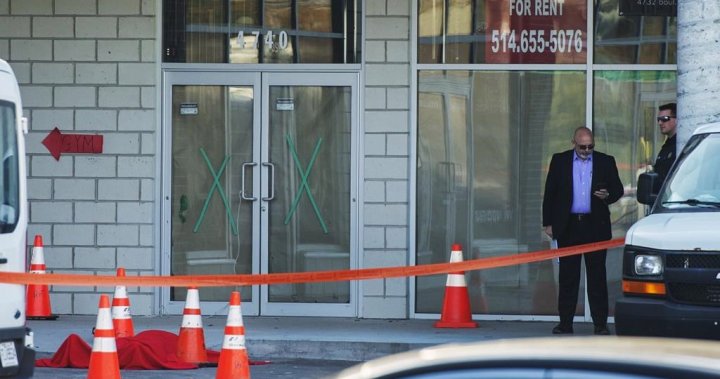 A panicking woman spins in circles and screams for her children. Well-dressed party-goers in the posh hotel lobby are frantic. A uniformed officer is on his knees, trying to pump life back into a dying Mafioso.

These scenes were captured in shaky camera footage, later published by the Journal de Montréal, on the night of May 4 after mobster Salvatore Scoppa was shot dead in a suburban Montreal hotel. Five months later, his brother, Andrea “Andrew” Scoppa, described in news reports as an influential Mafia figure, was shot in the head in a west-end Montreal parking lot — one of 17 organized crime-linked murders in the greater Montreal area this year.

Analysts say these types of shootings are becoming more frequent and more brazen, but they criticize police for a lack of transparency about the extent of the city’s crime problem. Police refuse to say whether the Montreal area is witnessing more shootings in 2019 than in past years.

1:47
Man with alleged ties to Montreal Mafia gunned down in broad daylight

Man with alleged ties to Montreal Mafia gunned down in broad daylight – Oct 21, 2019

While murders of organized crime members are nothing new in the city, retired detective Guy Ryan says Montreal is also witnessing a lot of what he called “disorganized crime.” He pointed to an October attack on a hookah lounge in the St-Leonard borough — also caught on camera and published by the Journal de Montréal.

Three masked men are seen emptying round after round from their handguns into the lounge, as patrons scurry under tables to hide from the bullets. He says that kind of violence — especially by young people — is happening more often. And he lamented that, compared to Toronto, the city’s police are keeping the public in the dark.

“We’re not seeing the kind of transparency here that we’re seeing in Toronto,” Ryan said in an interview.

Toronto police publish detailed statistics, such as how many shootings have taken place in the city every month, and whether anyone was injured — and the data can be sorted using several different filters. As of Sunday Nov. 3, Toronto had recorded 408 shootings in 2019.

2:04
How police are cracking down on organized crime in Quebec

How police are cracking down on organized crime in Quebec – May 13, 2019

When asked if Montreal police collected similar data, chief spokesman Andre Durocher said it is not available and suggested filling out an access to information request — a process that is notoriously slow.

He said no two police departments in Canada define shootings the same way. “Sometimes we get a call about a gunshot — and there never was a gunshot!” Durocher said. “It was a tire blowout.” In order to know how many shootings there are in Montreal, he said, someone would have to analyze every call made to police

Ryan, who spent 28 years on the Montreal police force, is not buying it.

“I can’t believe they came to the conclusion there aren’t any statistics,” he said. “I am convinced they study all the events with shootings — and those cases are worked as a priority, because those are crimes against people.”

Montreal’s La Presse recently sought to compile the number of murders, attempted murders, shootings without victims, and cases of gun possession or gun trafficking in the greater Montreal area this year and came up with 70 — 58 in Montreal alone. But the news organization’s tally was limited to cases that made headlines.

The Montreal police department’s annual report indicates there were 436 “firearms offences” in the city in 2018, but that term wasn’t defined. After being asked Thursday for the definition, a police spokesperson told The Canadian Press the information could not be available before next week.

Ryan said the gunplay around his neighbourhood of Montreal-North is increasing. Whereas shots used to be reported in particular high-crime areas, “now it’s everywhere,” he said. Drive-by shootings, where young men would release rounds just for fun, used to happen at night, Ryan said — now it happens in broad daylight.

He said he’s convinced the police are working hard and investigating these crimes: “What I’m saying is they lack a little bit of transparency.”

Organized crime expert, Andre Cedilot, a retired journalist and co-author of the book “Mafia Inc.” about the Rizzuto crime family, said the recent rash of killings is a sign of the power vacuum in the city’s underworld since the death of Vito Rizzuto in 2013.

Rizzuto was able to keep the peace, settle disputes and control warring clans, Cedilot said, but since his death, at least three or four attempts to take over Italian-linked crime circles have failed. And the Hells Angels have taken advantage of the chaos and now control much of the city’s drug distribution network, he said.

The biker gang’s resurgence has not been without a cost. On Oct. 17, a Hells-linked drug trafficker, Gaetan Sevigny, was shot dead outside his home north of Montreal. Another reported Hells Angels associate, Roger Bishop, was murdered Oct. 30 outside a gym just south of Montreal.

In response to the recent spate of organized crime-related murders, Quebec and Montreal police announced last Wednesday their officers would work together in a permanent squad dedicated to investigating groups such as the Mafia and the Hells Angels.

Of the 17 killings in the Montreal region this year that police link to organized crime, just three were on the island of Montreal and 14 were in off-island suburbs, provincial police spokesman Guy Lapointe said.

Lapointe and Durocher did rounds of media interviews earlier in the week to market the new “mixed squad” — but they were unable to say whether gun violence is on the rise.

“It’s a lot,” Lapointe said of the number of slayings this year. “I don’t have the number of the other years on me, but it’s a lot.”