In late 19th-century Montreal, the area around Carré St-Louis was a choice location for the residences of the city’s French-Canadian elite – doctors, lawyers, businessmen and politicians.

Avenue Laval is among the more handsome streets in the neighbourhood, northeast of the downtown. It boasts long stretches of stately greystone Victorian row houses. Many have been restored or spruced up, but the odd neglected or derelict structure remains. Robert Girard, a long-time suburbanite who commuted to his downtown law-firm office, would occasionally stroll down Laval and admire the gracious facades of the greystones. “I liked the street,” he said.

He and his wife, Louise Brossoit, – a spa-chain executive – were empty-nesters in a big house in the Montreal suburb of Mount Royal. Mr. Girard had already whet his appetite for fixer-uppers when he bought and renovated a triplex in a sector just north of the Carré, in 2013. 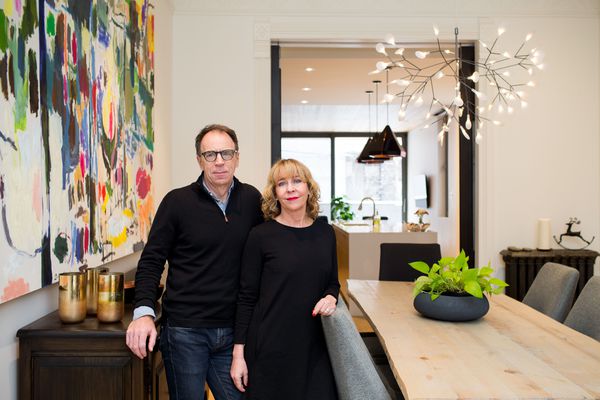 Three years ago, when he learned that a two-storey greystone on Laval – abandoned for 13 years – was going up for sale, he leaped at the chance to buy it. What he and Ms. Brossoit got was a structure with rotting wood window frames, a collapsing back wall and an interior that had suffered decades of neglect after having been transformed into a rooming house.

“My wife took one look – we had to inspect the interior with a flashlight because there was no electricity – averted her eyes and said, “My God!,’” Mr. Girard explains.

The challenge of returning the circa 1887 building to its former glory would be a major one. 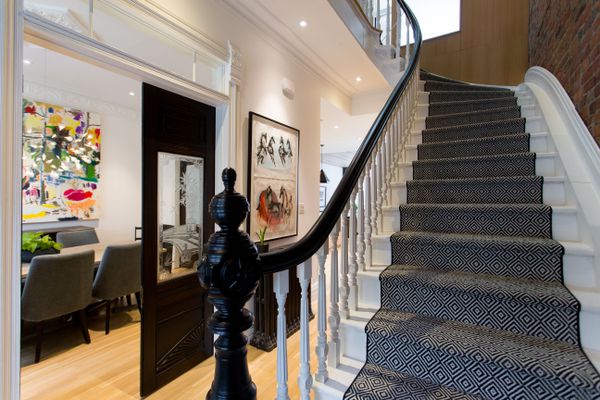 The curving staircase is an immediate highlight of the home.Sarah Mongeau Birkett/The Globe and Mail

Today, the restored house – with a contemporary twist inside – is a testament to the loving attention to detail on the part of Mr. Girard and the artisans and heritage specialists he hired, aided by Montreal architecture firm _naturehumaine. In recognition of the project’s success, Mr. Girard and Ms. Brossoit recently won top prize in the“Caring For” category of the city’s 2018 heritage preservation awards, known as Opération patrimoine Montréal.

Their house and its restoration were selected by a seven-member jury headed by architect/professor Peter Jacobs, president of Montreal’s heritage council. The city’s partners in the sponsorship of the prize are preservation group Heritage Montreal and the Quebec government.

Unlike other projects where little more than the façade is kept, much of the original design details of the interior of the Girard-Brossoit house were restored and given new life. In cases where the original features – such as the magnificent front double doors – were not recoverable or available, identical copies were made or reasonable replacements purchased.

“I wanted to keep much of the historic traces, not just the façade,” Mr. Girard said on a recent tour of the home.

Upon entering, one is immediately struck by the curving staircase with its dark-wood handrail and handsome finial atop the newel post.

Etched glass in some of the doors between rooms add an elegant touch. Plasterwork, wood trim and window transoms abound and help give the place character. 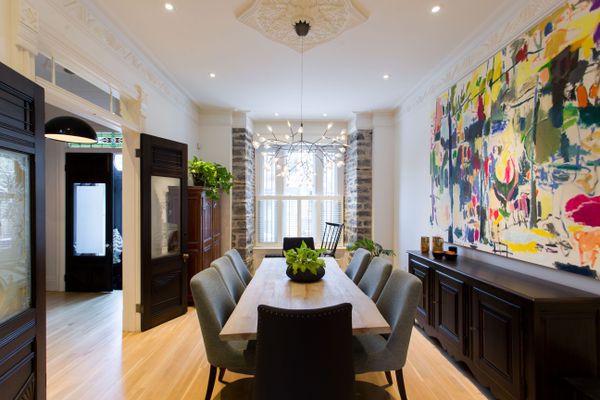 A contemporary light fixture hangs from an ornate ceiling rose in the dining room.Sarah Mongeau Birkett/The Globe and Mail

An ornate ceiling rose in the dining room frames a contemporary hanging light fixture. The plaster work throughout the house was done by an expert in heritage reconstruction who, in some cases, worked from plastic moulds and had to design specially tailored tools to get the desired results.

Giving the house added personality and warmth is the exposed brick along the main staircase wall and the stone-and-brick that flanks the dining-room window. Many of the original cast-iron radiators were spruced up and repurposed to provide electric heat. 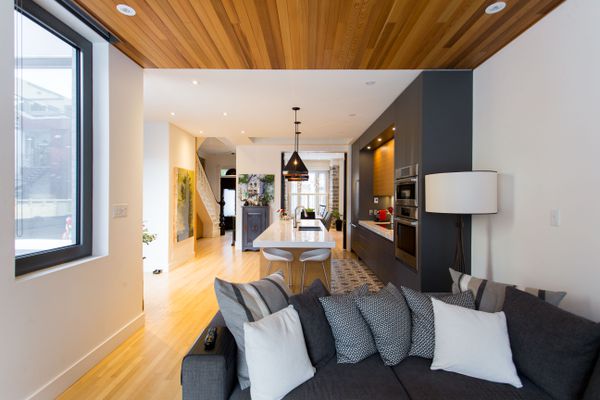 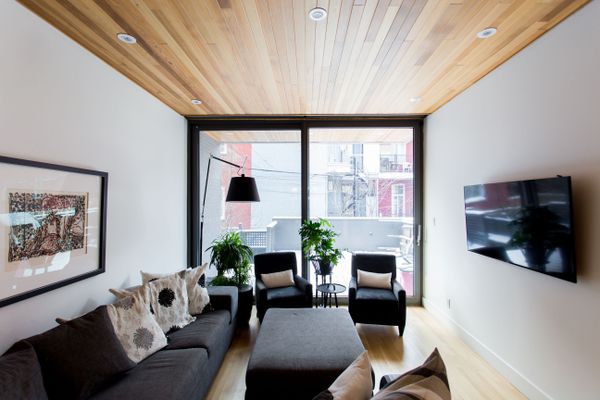 The kitchen flows into a rear add-on with massive sliding doors to the wooden deck.Sarah Mongeau Birkett/The Globe and Mail

Off the dining room, towards the back of the building, is a spacious, sleek contemporary kitchen dominated by a massive island topped by a sintered stone slab. The open kitchen space flows into an add-on at the back that serves as a lounging area; massive floor-to-ceiling sliding doors open onto a compact wooden deck.

The architect addressed the problem of insufficient light in the darker recesses of the middle of the house not only with generous window treatments at the back, but also by strategically placing glass partitions that feed light to the interior and installing a third-storey glass floor/skylight that sends sunlight cascading down to the ground floor. 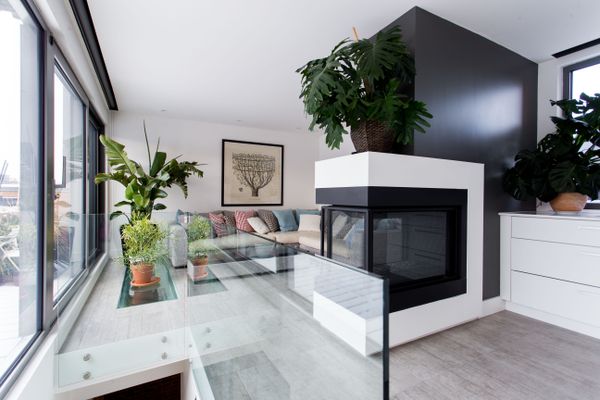 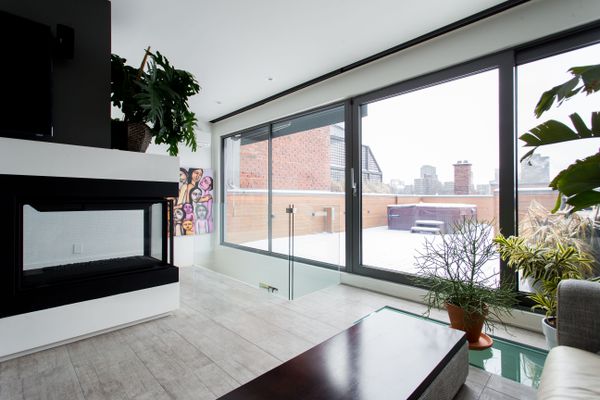 The third-floor addition includes a rooftop deck with a great view of Mount Royal.Sarah Mongeau Birkett/The Globe and Mail

The third-floor addition is reached by a minimalist white-oak staircase that also allows light to flow down to the lower levels. This top floor space includes a cozy den/TV room; the rooftop deck has a hot tub and offers a stunning view of Mount Royal.

There are two bedrooms, two bathrooms and office and laundry space on the second floor; the bedroom at the front has access to a covered balcony. Outside, the steep mansard roof and two turrets were reclad in new slate.

Certain architectural and decorative elements that were broken beyond repair or missing – such as parts of the main staircase – were salvaged from the house’s twin next door, whose owners were not interested in retaining the old-world interior.

But there were also components from the original that could not be exactly reproduced, such as the globe lights flanking the front entrance’s bright-red doors. The ones that were installed represent a reasonable replacement in terms of the Victorian look. “I spent hours and hours on the internet searching for items,” Mr. Girard said. 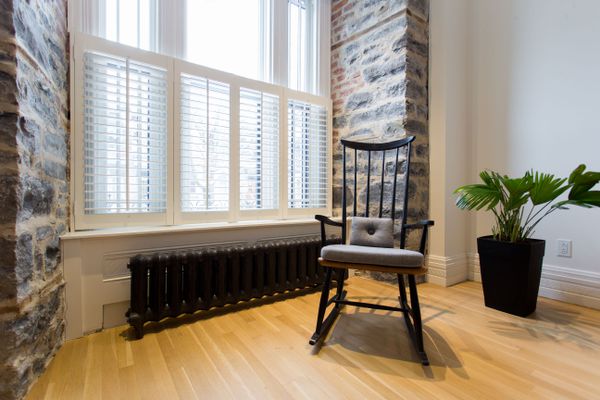 Some of the house’s cast-iron radiators were repurposed to supply electric heat.Sarah Mongeau Birkett/The Globe and Mail

The basement was converted into an apartment that is rented out.

Mr. Girard says all of the money from the sale of the house in the suburbs, plus “a bit more” cash went into the purchase of the Laval house as well as towards its restoration and modernization: about $535,000 to buy it and $800,000 to bring it back to life and add the distinctive contemporary comforts.

There is a glint in Mr. Girard’s eyes when talk turns to possible future projects.

It’s certainly something to consider, once retirement rolls around, he says.

Your house is your most valuable asset. We have a weekly Real Estate newsletter to help you stay on top of news on the housing market, mortgages, the latest closings and more. Sign up today.

The Finest Dumplings in Montreal: The place to eat nice dumplings