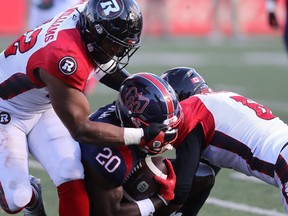 Week 19 in the CFL kicks off on Friday night with a showdown between the Montreal Alouettes and Ottawa Redblacks.

These East division foes faced off on Thanksgiving Monday with the Redblacks winning 24-18 on the road, and they’ll play again on just three days of rest in the nation’s capital. Despite losing in the last meetings, oddsmakers expect the Als to win on Friday with CFL betting lines opening with Montreal as a 3-point road favorite.

From our newsroom to your inbox at noon, the latest headlines, stories, opinion and photos from the Toronto Sun.

The next issue of Your Midday Sun will soon be in your inbox.

Here are my best free Alouettes vs. Redblacks CFL betting picks and predictions for October 13.

Alouettes vs Redblacks picks and predictions

The Redblacks won in their first game under interim head coach Bob Dyce on Monday, but such boosts are usually short lived.

Now they head to TD Place where they don’t seem to benefit from any home-field advantage despite the typical shift in the spread. Not only are the Redblacks 0-7 straight up and against the spread at home this year, but the Als have gone 7-0 ATS in the previous seven meetings between these rivals in Ottawa.

The Redblacks may have won on Monday but they surrendered 338 yards through the air and benefited from an Alouettes ground game that uncharacteristically struggled. Typically the Als have one of the best rushing attacks in the league, and star running back William Stanback should look better in his second game back against an Ottawa defense that has been gashed on the ground all year.

Look for the Alouettes to clinch a playoff spot and grab them on the spread.

The Redblacks climbed back from a 15-7 first-half deficit on Monday to beat the Als by six points.

Their record still sits at just 4-11 although they’ve gone 3-5 SU and ATS in their last eight games — a span that includes a pair of wins on the road in Montreal.

Ottawa fired head coach Paul LaPolice before Week 18 and Dyce took over as interim coach with Will Arndt calling plays. Quarterback Nick Arbuckle looked sharp on Monday — completing 87.5% of his passes — but he rarely threw it deep and lost his best receiver Jaelon Acklin who was badly concussed after a helmet-to-helmet collision.

The Alouettes might be one of the healthier teams in the league with Stanback returning to the lineup after breaking his ankle in Week 1. Stanback wasn’t effective in the loss but he should be closer to his All-Star self as he shakes off the rust.

Montreal has played better on both sides of the ball lately and has gone 5-2 SU and ATS in its last seven games. That said, both of those losses during that stretch came against the Redblacks with Ottawa also beating them 38-24 in Week 13.

Both of these offenses struggled in the red zone last week. Kickers Lewis Ward and David Cote combined for seven field goals (with none coming from more than 30 yards out) which resulted in a lower-scoring contest than the first two meetings this year.

In Week 13, these sides combined for 838 yards of offense and 62 points. In Week 7, there were even more offensive fireworks with the Alouettes winning 40-33 and the teams totaling 928 yards.

It’s worth mentioning that both quarterbacks were able to easily move the ball through the air on Monday but had a tough time running the ball.

That’s an outlier for these stop units with both of these squads usually struggling against the run. In fact, before last week, the Als were dead-last in the CFL with 5.23 yards per carry allowed and the Redblacks were only marginally better at 5.18.

Alouettes vs Redblacks trend to know

Information in the above article is for entertainment purposes only and is not targeted to under 19 audiences. Using this information to contravene any law is prohibited. Visit the Responsible Gaming Council’s Safer Play to keep gambling safe and fun.

Issues To Do With Your Associates This Halloween 2015 In Montreal

Chau Down: A Montreal Meals Diary