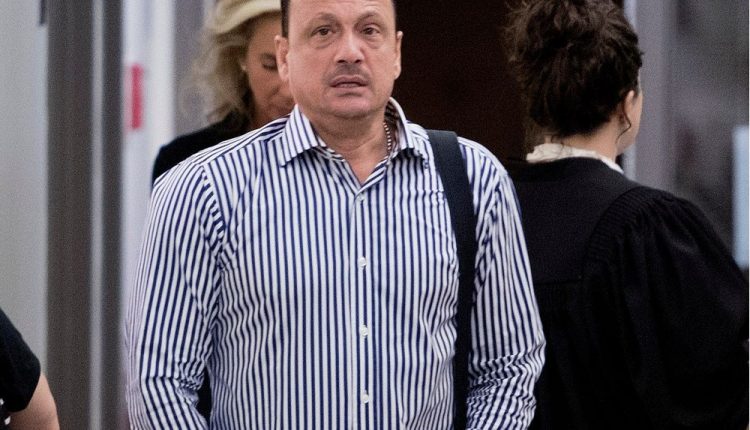 Stefano Sollecito exits a courtroom during a break in a hearing as part of Project Magot at the Gouin courthouse in Montreal on Monday, Aug. 14, 2017. Photo by Allen McInnis /Montreal Gazette

A Superior Court judge will hear arguments in the coming days on whether alleged Montreal Mafia leaders Leonardo Rizzuto and Stefano Sollecito should have a trial separate from the other people accused in Project Magot.

In fact, during a hearing at the Gouin courthouse on Monday, Justice Eric Downs was presented with nine motions from a total of 10 people demanding they have trials separate from others accused in the cocaine-trafficking investigation that produced the arrests of dozens of people in November 2015, including the alleged heads of various organized crime groups based in Montreal. Downs is scheduled to hear arguments on the motions — and a few others involving evidence — during the next two weeks.

The tentative plan is to hold a trial for 14 accused beginning in September 2018 over the course of six months. But, as Downs pointed out on Monday, the motions requesting separate trials might alter those plans. Downs singled out the request made by Rizzuto, 48, and Sollecito, 49, while describing it as distinct. Sollecito is still dealing with health issues that were a factor in him being granted bail last year. Rizzuto, 48, the son of deceased Mob boss Vito Rizzuto, wants to have a trial in English. Both men are charged with taking part in a conspiracy to traffic in drugs between Jan. 1, 2013, and Nov. 16, 2015. They are also charged with committing a crime “for the benefit of, at the direction of, or in association with, a criminal organization,” a Criminal Code offence commonly referred to as gangsterism.

Nineteen people in all were charged in Project Magot, an investigation by the Sûreté du Québec that intersected with Project Mastiff, a drug-trafficking investigation by the Montreal police. Four of the 19 accused have since entered guilty pleas to a variety of charges. Last week, another of the accused, Sean Brunet, 49, of LaSalle, was granted permission to have a separate trial. On Monday, prosecutor Matthew Ferguson told Downs the Crown would not contest a request for a separate trial made by Kathia Légaré, a 31-year-old Laval resident who faces the same conspiracy charge as Rizzuto and Sollecito.

Defence lawyer Mylène Lareau filed a series of motions that are also expected to be heard in the coming days, including one requesting that the Crown turn over all information related to a contract awarded to a prosecution witness who is expected to testify. In recent years, defence lawyers in unrelated cases have uncovered promises (in some cases involving significant financial benefits) that were made to other informants, in exchange for their testimony, that were never disclosed during trials.

Maurice (Mom) Boucher, 64, the former Hells Angels leader in Quebec, also appeared before Downs on Monday. He and his 27-year-old daughter, Alexandra Mongeau, are charged, along with Gregory Woolley, 45, with plotting to kill Raynald Desjardins, 63, an influential figure within the Montreal Mafia. The charges in that case involve a different part of Projects Magot and Mastiff. Boucher made the court appearance through a video linkup with a federal penitentiary where he is serving life sentences for ordering the murders of prison guards in 1997. The murder conspiracy trial is scheduled to begin in April.